We have been working on the back garden for a week now, and things are progressing amazingly.

We arrived back from the Armistice 1918 ceremony to find Alex well advanced with laying the footings for the retaining wall. After lunch, he and I started work on where exactly the gate posts had to be in order for the gate to close properly. This took longer than you might think, but we did take as much time as was necessary to be totally confident (and then we checked, rechecked, and rechecked again).

Footings for the retaining wall, with the drainpipes
and drainage pipes (almost) in place 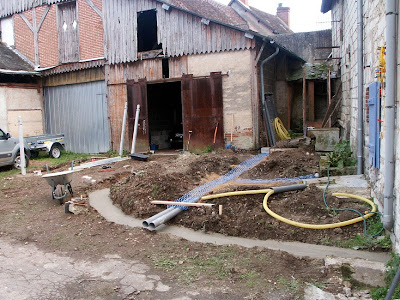 We also decided how to hang the gates, as well. The original fitting were for hammering in to stonework, and were no good for concrete posts. Instead, we will be manufacturing the fittings ourselves and bolting them to the posts using expansive bolts. I made this decision on Thursday (all on my own, I might add) whilst standing in Bricomarché fuming that no-one makes the right fittings for anything I want to do. Hopefully our custom made parts will be an elegant and effective solution.

Yesterday morning Alex arrived with Derek, who was going to be building the retaining wall. The longer wall was quite an involved job, as it is quite a sharp curve - not easy when building with blocks 500mm (18 inches) long.

The straight wall is in, and Derek is getting
to grips with laying the curved wall. 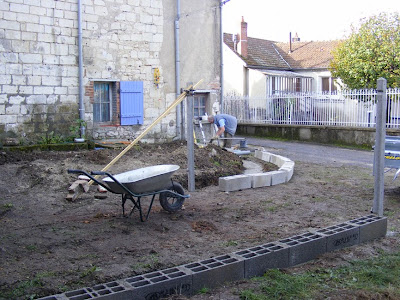 By the end of yesterday both retaining walls were in, and Susan had started work levelling the ground behind them. Our plan is for the garden to be level with the floor of the garage to it's full extent, with a little raised patio in the small alcove at the back. We wont be able to totally backfill behind the walls for a couple of days, nor will be able to hang the gates, but we are now at the stage where we can see what it is meant to be.

The retaining wall finished, with the pipework in place.
Once the concrete is set, the pipes will be cut flush. 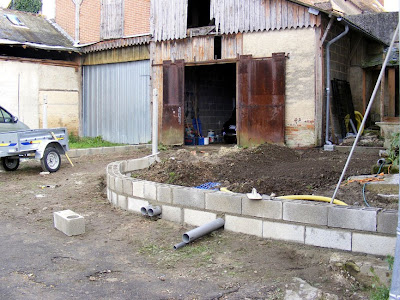 This works are temporary in order that we have a level, usable garden whilst stopping all our soil washing away and clogging up the town drains. Ultimately we hope to have the sort of garden boundary common to Preuilly: a rendered wall with fer forgé (wrought iron) railing on top as can be seen in the background of the second photo.

PS, My mother had her heart valve replacement operation at 9.30am Australian time on Remembrance Day. 24 hours later she was sitting up in bed eating breakfast. They have already got her walking again, and next week she may be sent home.
Posted by Simon at 09:00

Wonderful progress on the back garden, it is a lovely feeling to sit at your ease and survey the plans coming together, especially when you get some plants to watch as they flourish and beautify your "little patch"
So good to hear your Mum is making good progress, the sooner she gets moving, the sooner she will be feeling Tip Top again.

Hi Simon and Susan, I have been following your blog for quite a while and love the care you lavish on your home.
Be careful with exasion bolts if those are the gate post I can see. Expansion bolts can crack concrete in small posts. Maybe consider one of the chem fix resins

Anon - Welcome to the comments. I won't be tightening the expansive bolts too much - I have already exploded bricks by being too enthusiatic with tightening bolts. I would love to use a resin, but I wouldn't kmow which one to use in English - and buying glue type stuff in French is one of the most difficult things I know of! Add the two together, and an outbreak of plumbers language is virtually guarenteed. Maybe a combination of bolts semi tightened and epoxy resins?

Abbeys mum. Thanks - it is a relief!

Hi again Simon, they are polyester based resins, the most expensive and strongest methylacriliate or epoxy acrylate Known as scellement chimique. The tubes all have static mixer type nozles as apposed to silicon or mastic that just have ordinary nozles

glad your mother is well. tell her she has a fan in albuquerque.
i am loving these construction posts as usual.

I get the same fuming feeling standing in the Brico.... thanks Annnonymouse... I've got a couple of bolts to fix as well [in a rather elderly concrete post [but thicker... now I know which glue to look for.