Why do we Blog - and a Landmark

At some time today we will have our 100,000th visitor to the blog*. This is quite exciting, and has led us to do a bit of thinking about the blog and why we do it.

Us, looking excited. Jocelyn, who is a regular
reader of the blog, took the photo in September 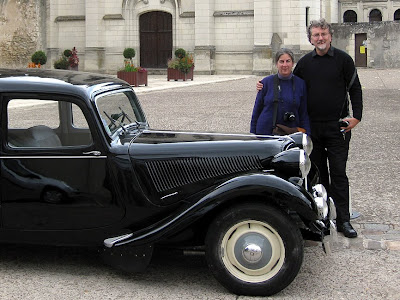 We started the blog in August 2008 2006 as an easy way to let our families (mainly) know what we are doing without having to email them all individually at a time when we were very busy. Gradually (very gradually at first) this spread to include our friends, then people who had been searching the internet and stumbled across us. At first, that was people who had actually searched for "Preuilly sur Claise", usually people with a house in town. From there the readership has spread, mainly through links on other people's blogs, but also through people who search for information on poisonous snakes in France, feather steak, Kouign Amann or a million and one other things we have written about.

The flow of information isn't all one way, either. We have received useful advice in comments people have made: usually on building matters, but also on recipes, how to say things in French, where to buy stuff, and interesting places to visit. Keep those comments coming, they are all appreciated, especially when they fill in blanks in my knowledge. Of course, compliments are always welcome too :¬)

We started customising the blog in January 2007.
This was our first photo header.

We enjoy writing the blog, although sometimes it does feel like a chore; what do you write about on days where our life, although we are living in France in an old house and own an old car, is no less mundane than anyone else's? At first we blogged only when something momentous was happening: the first post we ever wrote was the day after we paid the deposit on the house. Since March 2008 we have posted every day: as a record for us of what we have done, and as a reminder of how far we have come when we are feeling like we aren't achieving. On the days where we haven't been achieving we post the cooking/touring/local colour type things - but you can't take for granted that a post about flowers means we haven't been working. If we have worked too hard, spending a couple of hours at the computer the same evening (or before 9.00am the next day) may be beyond us.

Through the blog we have met a lot of interesting people. The first people we met because of the blog were Alan and Jane, who very kindly invited us for dinner on Christmas Eve 2006. Since then we have shared many meals with people from all over the world, both in our own home, their homes, or restaurants. Susan was a bit dubious about meeting all those people, but we are reassured that we haven't met any nutters (except in the nicest sense of the word) yet. The only continent we haven't met people from is Africa, which doesn't really surprise me: the spread of visitors to the blog looks like this: 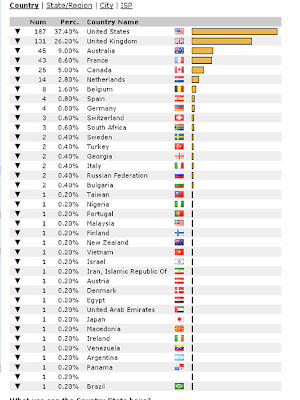 Last time we wrote about this the headline numbers were:
The blog also give us an opportunity to share our photos. Since we bought our first digital camera in 2002 we have taken over 21,000 photos, of which 15,400 have been taken since we started looking for a house in France in January 2006. As an act of mercy we have only put 1900 of those photos on the blog. I like to have 3 photos on a blog entry (no idea why, I just decided that it made a post look balanced), so sometimes we have to make some difficult decisions about which photo we chose to show. As you can imagine, some photos have been taken many times: no matter how many times you visit Chenonceau, for instance, you can't help but try take the "classic" photo. Likewise, when I see a Bee Orchid in good condition I feel obliged to take at least two shots from every possible angle. At least with digital cameras I don't have to get the photos developed and there is no financial penalty with taking so many photos beyond buying a hard drive to store them all on.

There has been a suggestion that I only blog so I know where I was and what I did on any particular day. This will be strongly denied, but I will admit there are one or two entries where I squirm a little when I read them. Such innocence...


*we passed the 50,000 mark in April this year. That means we have had as many visitors in the last 7 months as visited in the previous 2½ years
Posted by Simon at 09:00

Well, we love your blog and look forward to our daily dose of the Living in France Fantasy and the chuckles you provide.
More of your wonderful photos would be a pleasure too. By the way, today's looks mighty familiar!
Keep it all coming, please.

yup. Have you seen that photobefore you reckon?? Sorry I didn't credit it - but thats corrected now.

Please please don't stop, only discovered your wonderful site a couple of weeks ago but love it. So helpful, informative, interesting, my dream is to move to France with my dogs. Your blog is real I get to read about what it is really like everyday, inspires me to continue with the dream. Thank you. Mary.

Well done !! Your blog is an endless source of entertainment and information. We look forward to reading it every day.
Having met you makes it all the better !!

Simon and Susan,
We enjoy our daily read as many others do as well.
I'm interested to know how an Australian couple are able to be residents of France when I thought that we were only allowed to stay for 3 months.
I recently purchased Classic and Sports car magazine to see the gathering of Tractions for the 75th anniversary of its release. Did you attend?

Hi Susan and Simon,
For some reason or other, your entries are always interesting and entertaining. Excellent pictures, too. Keep up the good work, keep up blogging!

It's good to know that I am one of the 5% from Canada.
Keep up the good work since I am learning a lot from both of you :-)

Congratulations, you two. Keep up the good work. It's hard, sometimes, to find inspiration, but you do it.

Bravo ! I have been reading your blog everyday for a few months now ; it is very interesting ; when I'm retired, I promise I will start a blog like yours but at the moment ,impossible, I teach English in a secondary school and it takes up all my time : anyway you are part of my evening break before I go back to marking papers !! so keep blogging !
amitiés à vous et je suis heureuse que vous ayez été bien accueillis dans mon pays .

I am one of those who found y'all's blog when I googled "Preuilly sur Claise" after we booked our gite in the area in April 2008. And I have been reading ever since. Thank you for the updates, very interesting insights into the food, plants,and culture of your hometown now. Blessings to you and since we were one of those "nutters" (hee hee) who almost got the chance to meet you, I can only hope we can meet you on a future visit. And if you should ever find yourself in central Texas (Waco area) you are more than welcomed to our neck of the woods!

Well done, your blog is always interesting and enjoyable to read. I first came across you when I googled Le Petit Pressigny, and I shall soon be living there - well part time!
Keep up the good work!

Congratulations from another faithful reader! I really look forward to reading your blog daily!
Linda

Congratulations! a true treat...thank you!

Oh Simon, I didn't need the credit, but thanks. It was just fun to see it and remember the lovely day you and Susan gave us.

Thank you everyonr for the comments - you're all very much appreciated. Its good to see a few new commenters, as well.

Congratulations Simon and Susan on the 100,000. It;s interesting to see that you have had 50,000 visitors in the last 7 months. Good blogs, which yours is, do seem to suddenly take off. I fancy that one of the key factors is the discipline of posting something everyday.