Last week we had to drive to Chatellerault. On the way we stopped where the main road crosses the avenue of trees that lead towards the chateau of Boussay (I had to stop the seat belts in the back seat rattling). We have noticed a cross at the head of the avenue (map here) but never stopped to look at it. 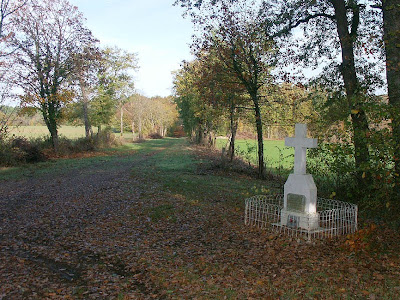 The inscription translates as "Simon Jacquet shot as a civilian hostage by the Germans during their retreat of August 29, 1944 at the age of 20 years " We assume this ties in with the events we described when we wrote about the hostage crisis in la Roche-Posay, and it also happened the same day 3 resistance fighters were killed near Cingé. Frustratingly - but as per normal - we can find nothing about this online. Time is fast approaching where Susan and I will have to start buying books about the resistance and the history of this area during the Second World War.

I have started mapping the WW memorials here
Posted by Simon at 09:00