The third Thursday of November is the first day you can legally sell Beaujolais Nouveau, the first wine of the new season, produced in the Burgundy area of France north of Lyon. It is a light bodied red wine, made from the grape variety Gamay. In the 1980s and 90s there was a huge marketing campaign which skyrocketed to popularity a wine that was considered rather unsophisticated by many. The party is pretty much over now, as it is widely viewed as not especially good value for money. 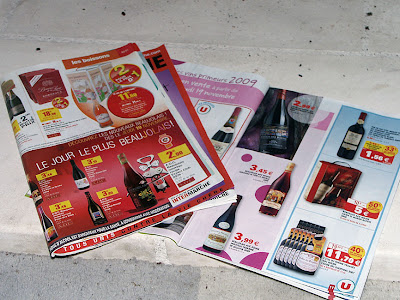 It has to be said, though, that the prices seem completely reasonable, and some may find their way into our "drink now" cellar.

And don't forget the local Touraine Primeur! Always worth a taste, if for nothing else to celebrate the time of year.

Word verification is "heous" which just about describes the worst hangovers we have ever had which was after a "Beaujolais Nouveau" evening a few years ago. We didn't think we had drunk much but it was really rough.
We give it a wide berth nowadays.

Walt - havent run into that yet, but we have never really been here at that time of year before. We will investigate!

Jean. I have one - the trouble is that certain parties regard the whole collection as "drink now", so the process is almost redundant.