Playing in the Mud

On Thursday last week Alex came over to mark up the layout of our new back garden in preparation for starting work on our temporary garden fence, as well as putting in retaining walls, terracing the back garden of the house, and redirecting the water from the downpipes on the garage and the back of the barn.

Once he had left Susan and I jumped in the car and shot off to Brico-Depot in Dissay (who are open from 7.00am to 7.30pm) to buy the garden gates. Even at well gone 6.00pm the shop was really busy, something that surprised both of us - the French really are a nation of home re-builders and decorators! Having the gates to hand before we start work is important: it would really peeve us to put in the gateposts too close!! 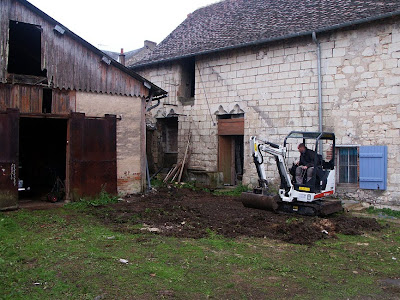 When we woke yesterday morning it was raining quite heavily. As we had arranged for a Bobcat digger for the garden to be dug up and footings put in for the retaining walls the rain was not an ideal start. However, at about 9.00 Alex arrived, together with Hamilton Wall and his digger. The weather held quite well, although it was cold, and we were soon making a mess of the garden. First job was to move the concrete laundry tub which has sat next to the garage ever since we have owned the house. This would have been impossible without the digger, as it was half full of stagnant water. We eventually shunted it out of the way (more of less) by pushing it around with the digger. 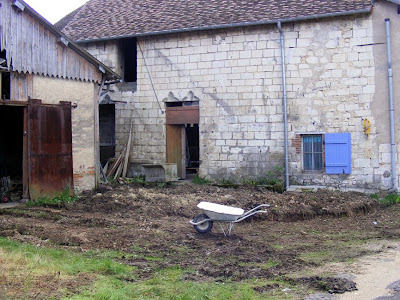 Once that was done we decided on a level for the main part of the garden, and the soil was scraped accordingly. That part of the process led to much scratching of heads and sucking of teeth as we were doing it by eye - none of us has a laser lever. The trenches for the retaining wall footing were put in and shallow trenches made for the drains to run along. 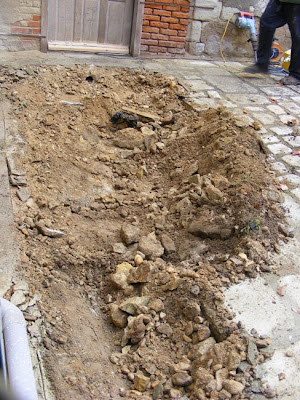 Then we moved on to the front courtyard, where the area of mysteriously missing cobblestones by the front door was to be scraped out in preparation for a mortar bed to sit replacement cobbles on. We didn't think we were going to have cobbles in the new area, but under the crappy concrete we found a heap of cobbles which should give us just enough to do the job. We will hire a whacker to flatten down the bed for the cobbles, which will be a new experience for us - both the hiring and the using of it. On Monday the "doings" will arrive - a couple of metres of gravel, sand and cement.

Great opportunity to make mud cakes :^)! Did you? Good luck with the digging: maybe you'll find a treasure! Martine

exciting, i look fwd to full documentation. are you looking at seed catalogues?