The headlights on a six volt Citroën Traction Avant are notorious (amongst Traction owners, anyway) for being a bit rubbish. One person on the Traction Avant Owners Forum even claims "last time I drove at night I swear they actually sucked in moonlight".

Now we have our new alternator fitted the headlights on Célestine have improved out of sight. Or would have done, if I hadn't lost low beam the other day. On Monday I took out the old lamp (which means dismantling the headlight, which isn't difficult, just fiddly) to begin my search for a new one. I needed the old bulb because (of course) there are 3 different sorts of fitting that were put into the Traction over the years by different factories - and on a restored car you never know what piece may have been retro fitted. 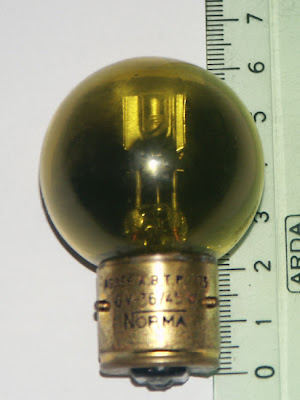 The old bulb turns out to be 36 watt low beam, 45 watt high beam with a 3 pin bayonet fitting, so that is what I am looking for. They aren't cheap - which is why I am in turmoil. If I buy one from a Traction Avant specialist it could cost me €17, which is a bit pricey when you consider I should be carrying a spare: so I have to buy 2.

I do have the consolation that once
I do buy a lamp, it could last a long time! 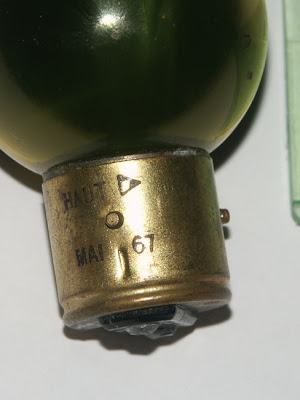 It would be a lot cheaper if I went for a white bulb instead: I can buy white bulbs from a motorbike specialist for €3.50, but I would like to keep the headlights yellow - It's more authentically French. Which brings us to an interesting little bit of history:

In 1936 the French government were becoming increasingly concerned about Germany - in March 1936 German forces reoccupied the Rhineland in contravention of the Treaty of Versailles in which it was agreed that the Rhineland would remain a de-militarised zone. This meant that Germany and France shared a border, which made the French government nervous - they were suffering a severe financial crisis and couldn't afford a war. In response they could only really afford to do one thing: make a shedload of new laws (aren't we lucky that governments these days don't react the same way). One of the laws introduced was concerning car headlights - in future they were to be yellow so that even if they couldn't do anything about German incursions into France, at least they could tell (by headlight colour) when they were happening. This law lasted until 1992, when an amendment allowed headlights to be either yellow or white.

The other option - should I decide to go for white lights - is to replace the old incandescent bulbs with halogen lamps - these are twice as efficient ( that is, they use the same amount of electricity but make twice as much light) and will light the way like never before. They are even more expensive: €30 apiece. At the moment though, the search continues for affordable yellow 36/45w or 40/45w, 40mm x 60mm bulbs with a BA21D fitting

*After I wrote this I had a period of quiet reflection and realised I had seen a headlight box somewhere. That somewhere happened to be Célestine's glovebox, and there was a new bulb in there.

This means that buying a bulb isn't as immediate a concern as I thought it was, but I am glad I had this little panic. I have learnt an awful lot, but I can now do some more research and order some new bulbs at leisure.

Célestine all lit up with new headlight bulbs 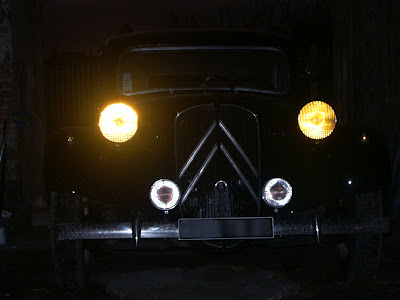 Hi Simon, does this help?
http://www.norbsa02.freeuk.com/goffybulbs.htm

My past tractions were all English, 12 volt of course so no problem - only jokin' - all Lucas, Prince of Darkness.
Leon

Anon - I saw that site early on in my research, but didn't pay attention :) Thanks

Leon - 12volts - isn't that at least 6 too many? I am pleased to see that I am not in the worst of postions. some poor souls have 85v systems (I don't know what sort of vehicles that is though) - and they really DO have an expense!

Going to possibly upset purest's but would it not be worth (even just for your spare set...which may get broken whilst waiting for their moment of use.....)...buying the cheap 3,50 bulbs and paint them yellow...with the stuff we used to have to paint our headlight lenses in days gone by when we visited 'continental europe'... :)