How Brave are You Feeling?

Almost every day at the moment I see people in fields or forest, with baskets or plastic bags. They are gathering mushrooms. I've been quartering the orchard every time I go there just in case some tasty looking fungi emerges. (Actually, my technique is more like walking transects - up one row and down another.)

Yesterday I hoped my luck was in, as I came across what I was fairly sure were cêpes, and they were in perfect condition. Finding wild mushrooms that haven't got resident fly larvae munching their way through is nigh on impossible. I gathered them up and took them home to show Simon and ask how brave he was feeling. He said they looked fairly scary. 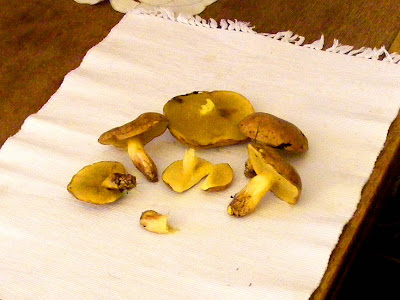 I had no intention of eating them without finding out what they were anyway. Whilst I was reasonably confident they were cêpes, I knew that a few species were outstanding eating but some species were not considered worth bothering with (because they were too bitter or go unpleasantly slimy or mushy when cooked) and a couple were not very good for you at all. I decided the simplest way of finding out what they were was to take them to our chef friend Jean-Michel Chedozeau at Restaurant de l'Image. It was just after 2pm, so I knew he would probably be taking a break in the bar. Sure enough, he was there, along with his brother Christophe, their wives and a couple of customers.

Jean-Michel's immediate response was to ask me if I had any neighbours I didn't like, but I wasn't fooled. He and Christophe glanced at the mushrooms and told me they were cêpes raboteux. They weren't dangereux, but they weren't worth eating either. I should have left them for the mulots (wood or field mice). They said their father had been out in the morning and got some real edible cêpes from a nearby pine forest, and told me you only get real cêpes near sapins (meaning pine). 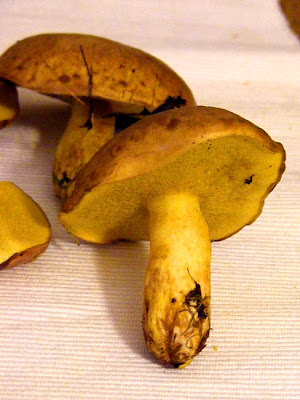 Back at home again, I did some reading to learn more about Bolete mushrooms, the group ceps belong to. That is one complicated taxonomical group that's been messed around with a lot by scientists trying to make some sense of it all! Finally, I ran my mushrooms through a taxonomical key and eventually ended up at...Leccinum scabrum (Birch Bolete)...which in French are called...cêpes raboteux! It took me a while and a bit more reading to be convinced . I was puzzled as to why I had found them in the orchard, with no birch in sight, if this species was associated symbiotically with birch. I was also puzzled by the lack of staining when I cut a mushroom. Both the colour of stain that emerges on newly cut flesh and the presence of the correct host are both important clues for identifying Boletes. More reading revealed that in Europe this species is also associated with dry grassland, and sometimes does not produce a stain. It also took me a while to see the tiny black 'scales' on the 'stem' which indicated that this was not in the genus Boletus, but in the closely related genus Leccinum. (It wasn't living up to its French name – which in English would be something like Rough Cep – very well.)

I'm now reasonably happy with the ID, but I am no expert, so could easily be wrong and Boletes certainly are a difficult group. I realised quite quickly that they weren't poisonous, because they meet the wilderness survival test: they don't have gills (they have tubes) and the flesh is white and doesn't stain when cut. (These mushrooms give an overall impression of being a rather lurid yellow, but in fact, the top is fawn, the tubes are yellow, but the flesh between the two is white.) This was all very interesting, but it's a great pity it wasn't worth whipping up an omlette.

Update: I now think it is likely that these mushrooms are actually Suillus neoalbidipes / White-stemmed Bolete / Bolete à pied blanc. This means that the tiny black specks on the stem are glands, not scales (common beginners error). Having revisited the orchard today and checked where I picked them, I realise they have a clear association with the rather out of place Monterey pine Pinus radiata there . It makes me wonder if it was planted in the hopes of Edible Ceps Boletus edulis appearing. S. neoalbidipes is apparently good eating if peeled and the tubes removed. I had a little nibble and it was pleasantly mushroomy.

Update II: I've now had these mushrooms expertly and definitively identified and they are Weeping Bolete Suillus granulatus, edible and sometimes used in commercial mixes of wild mushrooms. Wiping the tops and removing the pores before cooking is recommended as they produce a liquid which can have a laxative effect.
Posted by Susan at 09:00

"I had a little nibble" - you were a lot braver than me !! When you feel like a run out in Celestine I would recommend a trip to the mushroom museum near Saumur. It's on the road that goes from Chinon through Montsoreau.
Mind you, you probably already know much more about funghi than we did before we went in ! But it's a nice trip anyway, with a nice place for a coffee stop en route at Montsoreau with plenty of space in the car park to position Celestine just perfectly !

Jean: Field IDing wild fungi is too tricky for me. I just don't have the time to learn much about them, but a trip in Célestine to the museum to see some nice tame mushrooms sounds excellent.

Trying the Suillus wasn't particularly brave. I've seen that nice Mr Mears on the tele, and did it just like he would :-)