Alex arrived yesterday morning to start building work in the garden. We are putting in retaining walls and drainage, gates and a fence. At the top of the garden (by what we assume were the long drops) we are having another terrace for refined outside dining.

But first a long and slow movie
showing our stuff being delivered.

We spent ages getting our levels right - the ground is deceptively uneven in places - i.e. where you don't expect it to be - yet surprisingly level in places where it looks sloping. Once this was done, we decided how high the footings for the retaining walls should be. We managed to drive in some pegs, even though the "soil" is equal parts cobbles, flint, and degraded limestone clay.

Alex then dug out the channels where the pipes will be that take the water from our downpipes. These will eventually emerge at the base of the retaining walls, hopefully directing rainwater away from the walls of the house. Getting the levels for these wasn't easy (for all the same reasons as getting the levels right for the wall footings was difficult).

Alex demonstrates Blokes Yoga, while
Simon ignores the invitation to join in 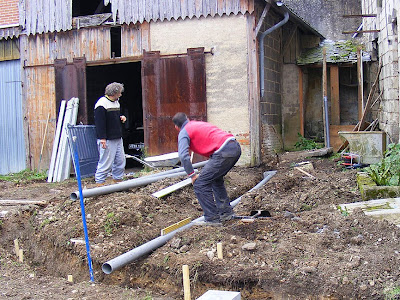 The trenches we had dug by bobcat on Saturday were ever so slightly in the wrong place; using them would have meant the gates wouldn't have shut overlapped by about 40cm - which would have been many things, peeving included. This meant I had to get into the trench with a mattock and finesse things (no photos taken, but even Susan will say it's true).

Once Alex had left, Susan and I went to Bricomarché in Yzeures and bought 25 metres of agricultural drain. This means that the new soil level shouldn't mean an increase of dampness in the walls - we will be laying the drain along the wall of the house, as well as along the foot of the retaining wall for the terrace.

Things are looking good - as long as we can get the gate posts in the right place and the gates hung properly I think the job will be a good 'un. That gets done tomorrow, but before that Susan and I are off to investigate what is happening in town for Remembrance Day (Armistice 1918, in French). Our banner today is in rememberance of the events of 1914 - 1918.

On a different note completely, my mother had her heart valve replacement operation today (Australian time). She will be off her feet for quite some time, so we had better make the blog posts interesting for a while!!
Posted by Simon at 09:00

Yoga - no, I think you're wrong. Alex was doing his orangutan impression. Obviously. A man of many talents, Alex. !!

Jean. Alex says it wasn't Blokes Yoga, but I am not sure that agreeing with your suggestion would gain me any brownie points :)

Hijacked Nic's google account to put in my cents worth...

Not blokes yoga...something much tougher, an artisan mud mover in repose :P