Villandry is considered a must see on the Loire Valley circuit, and one of the great gardens of the world. 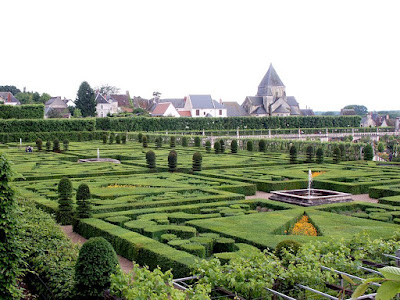 The Music Garden
About an hour and a quarter from Preuilly sur Claise and situated at the confluence of the Cher and the Loire, Villandry, built in 1536, was one of the last Renaissance châteaux to be constructed. It is in the architectural style known as Henri IV, unlike its neighbour Azay-le-Rideau, which is in the Italianate style with remnant medieval bits. In the 18th century the garden was in the English style ie a park, but in 1906 the property was bought by a Spanish scientist, Dr Joachim Carvallo, who created the famous parterre garden we see today, and Villandry remains in the hands of his family. Carvallo saved the château from probable demolition and went on to found the Demeure Historique in 1924 (the equivalent of the Historic Houses Association in Britain). 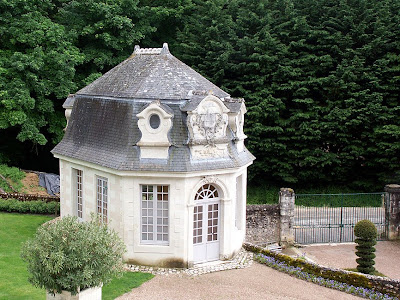 A small lodge in the gardens
The gardens are on three levels. The ornamental garden, on the middle level is by the south façade of the château. This garden is created from a pattern of Box, divided into four squares, each representing an aspect of Love. 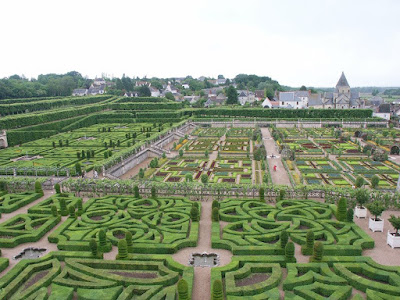 An overview of the gardens, showing the Garden of Love in the foreground, with the Potager beyond to the right and the Music Garden to the left. 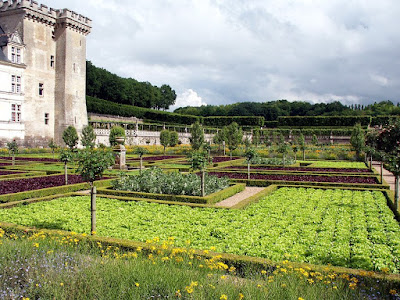 But it is the potager which is the masterpiece. 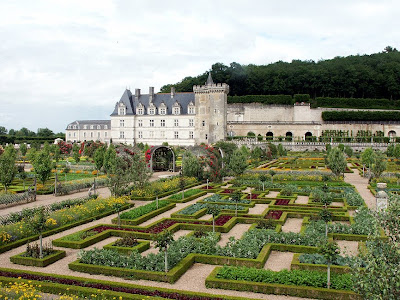 I thought the use of broad beans (the taller greyish plants in the zigzags) as a bedding plant was very creative.

There is no denying that Villandry is a striking piece of work. The parterres look like huge Oriental carpets made of plants and the effect is magnificent. The most striking aspect though is the sense one gets of the sheer amount of labour and horticultural skill that goes into maintaining the hedging and pollards and the absolutely uniformly sized and coloured lettuce, cabbage, carrots, leeks, broad beans and beetroot, set like the enamel in cloisonné. Man hours and skill like this cost a great deal of money.

I happened to read the entry in Routard regarding Villandry and was amused to see that the French version at any rate seems to be ever so slightly sniffy about Villandry. Routard is my friend at lunch and dinner time, but for some reason, I rarely consult the Guide regarding places to visit or accommodation. It's possible therefore that being condescending about visitor attractions is simply the house style.

Email ThisBlogThis!Share to TwitterShare to FacebookShare to Pinterest
Labels: Gardens and Parks, Pictures of Chateaux, Towns and Villages near Preuilly

I don't like Routard for places neither. I think the best one is the "green guide" de Michelin, at least for monuments, museums and places.

the potager really is impressive. if when you have time, some day, i'd love to read one of your meatier vegetable notes posts on it and its layout.
thank you.

PJ - OK, I'll bear it in mind. I hadn't planned to write more on Villandry, but if some new interesting aspect comes to my attention, of course I will.
Katarina - yes, the Michelin would be my choice too.
Susan