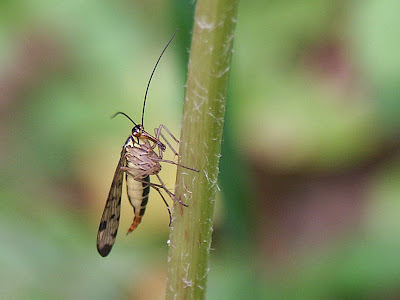 This weird creature is called a Scorpion Fly, but it is not a true fly. It has four wings, and true flies only have two. This one is female and heavily gravid (ie 'pregnant' - full of eggs). Which species of Scorpion Fly is very difficult to determine with females. They are creatures of shady places and that beak wiffles up dead animal matter and fruit, but they are completely harmless to humans. The photograph was taken just outside Bossay sur Claise.

The naming of names:
Scorpion Fly - so called because the males have what looks like a scorpion's sting at the end of their abdomen and hold it curled over their body the way scorpions do. They are completely harmless and this appendage is their genitalia.
Panorpa - means something like 'all turned around', presumably a reference to the way the males hold themselves. See a picture here.
La Mouche scorpion ou la Panorpe - 'mouche' = 'fly'.
Posted by Susan at 10:00