The Bain of my Life

So: we have now demolished the bathroom wall on my way to replacing the bathroom floor. The staircase (lower level, anyway) has also gone.

Almost 6' long, made of cast iron and wedged into a space almost 6' long, removing the bath is going to be a real issue. It would be difficult enough moving the bath out of its current space even if I was confident about the state of the floor - but as I am rather hesitant about even treading on the floor (probably unnecessarily, but I like living) it has become the elephant in the room. 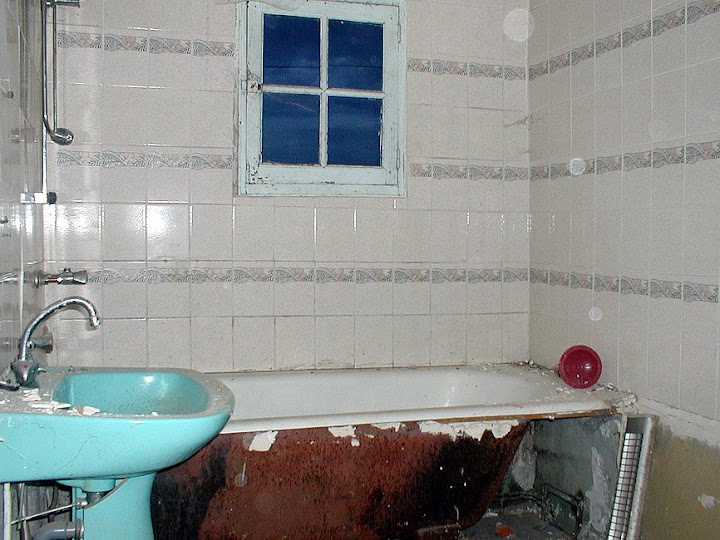 First step will be to disconnect and then remove all the pipework and the hand basin. Next, I will have to remove all the tiles from the wall as the bath has been tiled in - and the tiles have to go anyway. After that, the bath will have to be slid sideways through the space where the wall used to be. This should be the easy (if slightly uneasy feeling - c.f. my comments regarding the state of the floor) part.

The real problems will start once the bath is on the landing next to where the staircase used to be. How do I get a very heavy 6' long bath down a hole that measures 5' x 3' that doesn't have stairs? There are no beams from which I could sling a rope, and no way of jury rigging a lifting arm.

Consensus at the moment seems to be to break the bath (it's cast iron, a combination of drills saws and then a decent meaty whack with a big hammer should do it), but I don't like destroying anything that may come in handy in some form later.

I imagine the answer will be to wait until I have plenty of willing helpers, move the bath into one of the bedrooms and then have a good long think. I just hope there is someone around to take photos

this guy is a genius and can advise.

this one too, they're both very handy, respectful of old houses, and love to save money.