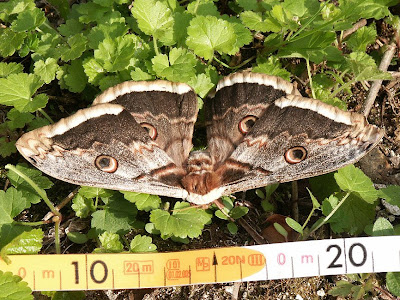 Allow me to introduce Europe's largest moth - the Giant Peacock Moth. This one was 15 cm from wingtip to wingtip. They can be seen from March to June and are often mistaken for bats. The caterpillars feed on Blackthorn, Ash and other trees. Here in Preuilly we are close to the northern limit of their range but they are fairly common. Females are bigger than males. This one is female, as can be seen by the fine string-like antennae. Males have very feathery antennae - all the better for picking up those irresistible female pheromones. They prefer open countryside and can be seen resting on tree trunks in orchards during the day.

The naming of names:
Giant Peacock Moth - well it's big and it's got false eyes like peacock feathers.
Saturnia pyri - 'saturnia' refers to the winter solstice, but I do not know what the connection to this moth is - perhaps the pattern on the wings was thought to resemble a mid-winter sunrise. 'Pyri' = 'pear' - a reference to their pear-shaped cocoons.
Le Grand paon de nuit - 'large night peacock'.

Ash - a large and impressive European hardwood tree, used for furniture-making and prized as firewood, as it will burn well even when wet. 'But Ashwood wet and Ashwood dry, A King may warm his slippers by.' In the past it was used to make weapons (spears and bows) and 'ash' is a corruption of an Old English word for 'spear'. The other well-known rhyme associated with Ash refers to weather forecasting - 'Ash before Oak, in for a soak' - however recent analysis of phenological records indicate that there is not much evidence to support the idea that if the Ash comes into leaf before the Oak we are in for a wet summer, and even if there is, it seems we don't have too much to worry about. According to British phenological records Oak leafing dates are advancing at a far faster rate than Ash (although it is also clear that British Springs are far more variable than those on the Continent, both in terms of average temperature from year to year and in rate of the advance of average event dates.) Presumably the trigger for Ash leafing is less influenced by temperature than Oak's trigger.
Fraxinus - the Latin for 'ash'.
Le Frêne - from the Latin.
Posted by Susan at 10:00

Your rhyme implies the opposite. Is it possible those old wives had a different maxim for every situation? It's certainly handy to have an explanatory rhyme in your pocket to meet all events.

Every day I learn something new from your blog. Thank you!

Your rhyme is perhaps an adaptation for North American conditions? Different species, different climatic zones? I think your thought on having a saying for every eventuality has merit though :-)
Susan