While I am back in London, I have had a mate from Australia staying.

Adrian used to live next door to my parents in Australia. He is on his "trip of a lifetime" (probably the third such trip he has made) and has been looking for a car to tow a caravan around Europe. As a bloke who knows blokey stuff, I have felt the need to be involved. Mainly because I know the lie of the land and he is a visitor, because Adrian is good with cars.

He has needed to be. We have seen plenty of rust buckets and met some Arthur Daley types (many of whom it would be advisable to count your fingers after shaking hands with). On Wednesday we did over 600km chasing around these "characters", not something you would want to do too often, but at last he has his car. 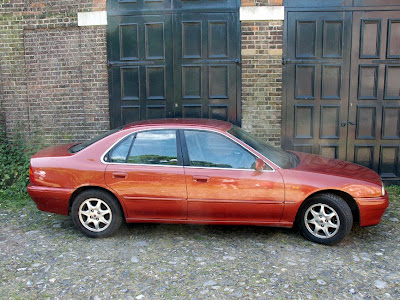 It is a big old lump of a rover, a turbo diesel for economy, with nice comfortable seats and a towbar. 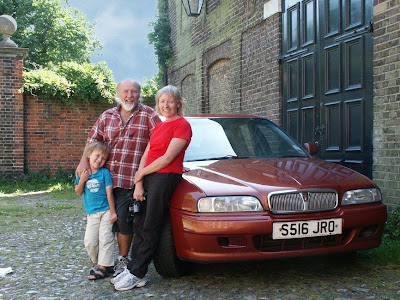 Now he will be able tow his caravan to Preuilly to help me shift the bath.

Simon, good work! I was worrying about you and that tub, and now you'll have help from Adrian--and his partner and child too! (I hope their role will be to stand by with phone in hand ready to punch in the emergency number.)

Seriously, I worry about the floor of the room, as you've described it. Can't you shore it up from below somehow before you start work? My husband would have better advice, but he's out now and I'm sure you and Adrian are on your way up the stairs even now....