May is asparagus time in the Loire. Many places in the Loire have sandy soil, ideal for asparagus production. It is grown in the Sologne particularly, and we have a local grower who comes to the Preuilly market with asparagus, walnut oil and eggs. The regional favourite comes in thick white stalks. Personally I prefer the sweeter green varieties, but sometimes in the smaller markets one can only get white, so I decided to make asparagus soup. 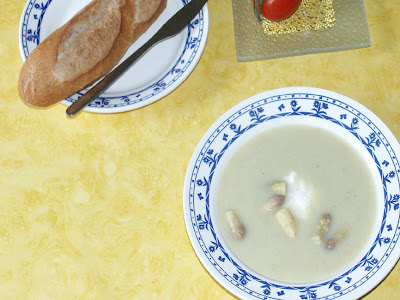 Unlike green asparagus, white asparagus must be peeled, as the skin is bitter. Apart from the skin, white asparagus has a much more delicate (dare I say - elusive!) flavour and is crisper and juicier than the green. With green asparagus, you hold the stem at each end and bend until it breaks. This nifty technique neatly snaps off the woody base at just the right point, without wasting any of the nice edible bit. The white stems are more brittle than the green, and snap very easily anywhere along their length, even when you are peeling them. This may be one reason why the thicker stems are more popular, and as they don't tend to be woody like the green, just cutting off a centimeter or so of the base is fine to clean the stems up.

The pale colour is achieved by a growing technique known as 'blanching', where the growing stalks have soil mounded up over them so they do not develop cholorphyll, which would change the flavour. These days they are also covered in plastic, and we saw several lots being harvested in the pouring rain recently, a few metres of plastic being lifted at a time. It looked utterly miserable, but the 'window' for picking asparagus is very small - it grows incredibly fast, and leaving it a day could easily mean it goes from perfect to stringy. It must be eaten as soon as possible after picking, as the sugars convert to starch very quickly. Sometimes you see asparagus at the market marked as yesterday's. It will be going cheap, but I am not convinced that it is value for money.

Asparagus also grows wild in the Loire (it is native to much of Europe), and this hedgerow species is considered a very great delicacy. I have seen it near Preuilly, but not in enough quantity to try a dish of it. We do get Spiked Star of Bethlehem Ornithogalum pyrenaicum, another wild native, on the roadsides and in the woods in greater quantity (though sadly not great enough to consider regular wild harvesting). This plant, unrelated to true asparagus, is also known as 'asperges sauvages' (or 'Bath Asparagus' in Britain) and one uses the stalk and flower bud spike. It can be purchased (in the very short season - perhaps only two weeks) from bigger markets, who are supplied by commercial growers. 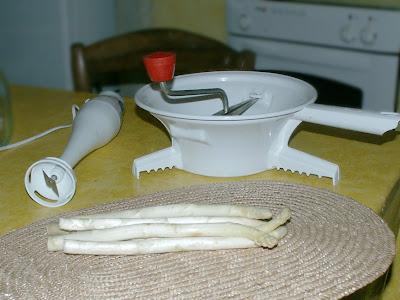 I creamed the soup using the hand held whizzy wand blender thingy, not the Mouli. Food mills are only really worth using when the air incorporated into the mix by an electric blender would change the flavour unacceptably. Tomato soup, for instance, needs to be milled by hand.

The fatter the asparagus stems, the better. It's not a matter of younger, more tender asparagus being thinner. The fatter ones are just as tender and you get more bang for your peeling buck!

Susan, by the way, I think the main advantage of using a food mill instead of a blender for soups and purées is that the food mill removes fibers, skin, and seeds from the vegetable pulp, whereas the blender just grinds it up together. The food mill gives you a more elegant, digestible result.

Ken - you are right on both counts. I find food mills vary considerably in their efficiency (and therefore tediousness of use :-) though. I am much more of a 'push it through a sieve girl' when I want the elegant result.
Susan