The Loire is known as the last great untamed river in Western Europe. For much of its length it is a World Heritage Site. Because it is not canalised or weired it tends to run wide and shallow, with many exposed gravel banks mid-stream. These provide refuges for rare species of bird, such as the Little Tern, to nest and roost. In biodiversity terms, the Loire is the meeting place of the Atlantic and Mediterranean climatic influences, making it a rich and surprising patchwork where you might see all sorts of unexpected species of flora and fauna. 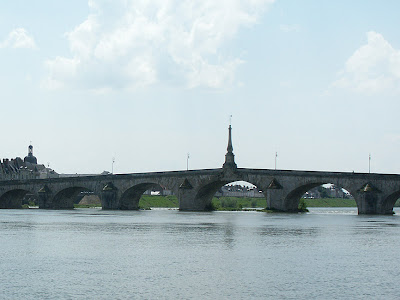 Here at Blois just recently, the river was unusually high, but the terns were still flitting up and down on their sharp little wings, between the bridge and the one gravel island that projected far enough to be above the water level. (And, no, we didn't manage to photograph one - they zigzagged much too unpredictably to ever catch up with.)

The best known section of the Loire, with its châteaux and vineyards, is only an hour or so from Paris and a deservedly popular holiday destination. However, to go south of the Loire is considered to be entering into an impossibly rural location, culturally remote and lacking in any sort of possibility for civilised entertainments. It's pretty much the equivalent of going north of the Watford Gap in England.

Those of us who live south of the Loire (in the Midi, as some would say with a smile) enjoy the relative quiet and the folksy ways of the non-Parisians who inhabit this wilderness.

Yum, wild boar, my favourite :-)
And as we are even further south of the Loire than you, you will understand that I was having a little prod at the city folk.
Susan