Today is the anniversary of the single worst atrocity committed by German troops on French soil in the Second World War. On 10 June 1944, four days after the Normandy landings, the village of Oradour sur Glane in Haute Vienne was destroyed by fire and explosives and virtually all its inhabitants killed. No one has ever explained what the trigger for this terrible act was. To make the twist of fate even more bitter, a significant number of the residents were incomers, having fled the Spanish Civil War in the previous decade. 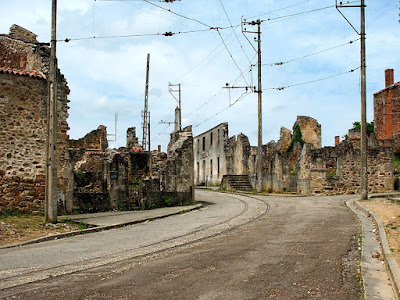 The site is a memorial now, with a striking looking visitor centre and a shocking and deeply moving museum detailing the events. There is a new village of Oradour, situated a short distance away. 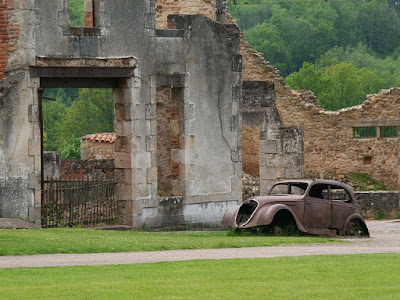 You cannot visit this place and remain unaffected. The tragedy is obvious even without seeing the video in the museum and reading the testimonies of the few survivors. Please visit sometime and honour the memory of the dead. Souviens-toi.

Read the full story on these websites:
Two and a half months after this event, whilst the Liberation of Paris was underway, the village of Maillé, only 40km away, was subjected to its own horror. A descendant of one of the survivors has created 25 août 1944 - Maillé, village martyr to tell the story. Thanks to Jill and John for alerting us to our local site of conscience.