As I was sweeping the house (a continual task in an old house made of limestone and occupied by a man intent on demolishing walls) I was surprised to see a bundle of dust wriggling its way across the floor. 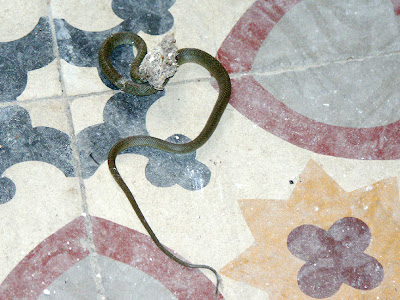 This "poor little fella" (© Rolf Harris) had managed to get his head completely entangled in a dust ball and wasn't at all happy, striking out at all and sundry. He almost managed to be scary - not a bad effort for a non-venomous snake only 10 inches long and as thick as my little finger.

I used a broom to shoo him onto a shovel and trap him there while I carried him to the garden. Just as well I am a tough Aussie used to snakes.

Just let no-one say we don't live in the country

Note from Susan: For those of you interested in such things, the visitor is a juvenile Western Whip Snake Coluber viridiflavus (Couleuvre verte et jaune). A photograph of an adult can be seen in my post about Snakes in France.
Posted by Simon at 10:00

Email ThisBlogThis!Share to TwitterShare to FacebookShare to Pinterest
Labels: nature and wildlife, Our house in Preuilly