This gorgeous flower is growing wild on the cliffs at Angles sur l'Anglin. Clove-scented and a bit straggly, it is tucked in on a sunny ledge overlooking the river. I think it is the rather rare Oeillet de Grenoble or Cheddar Pink Dianthus gratianopolitanus, but Pinks, the ancestors of modern carnations, are difficult to accurately identify and there is always the possibility that it is a garden escapee. 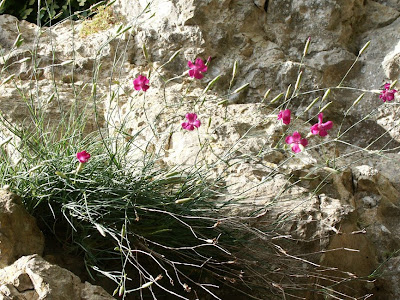 The rugged chalky cliff is just the right sort of habitat for a Cheddar Pink though. This is a plant of limestone cliffs, such as in much of France, but the plant is confined to a single gorge in Britain. Somewhat unusually, Cheddar Pinks are pollinated by butterflies and by both diurnal and nocturnal moths.

The naming of names:

Ah, but did you know the name for the colour appears to have come from the flower, rather than the other way around? The petals are "pinked" (i.e., the edges look as though they've been given angled cuts, the way "pinking shears" are used to cut fabric to stop stray threads pulling out).

Darn (as wcs would say :-) - I did know that and completely failed to recall it to put in the blog. Thanks for adding it.
Susan

I knew it too. Can't believe Susan didn't mention it