Maybe not the most sophisticated afternoon's entertainment, but a real barrel of laughs.

For those who have not experienced the excitement of Tour de France day (hi Susan and Ken), this is how the day goes:

First you get together for lunch with some friends. In this case it was Adrian, Carolyn and Corey from Australia, and Bengt and Susanne from Sweden. After a BBQ of Chili prawns, mergeuz sausages, various salads and a splash of gamay we wandered down the bottom of our street (struggling uphill struck us as a silly idea). 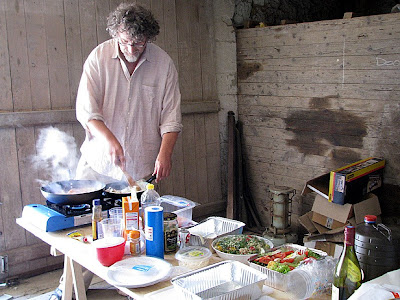 After watching the gendarmes stop the traffic (we had a barrier at the end of our street, how cool!) you wait around for ever in the sun, watching your neighbours watching you..... 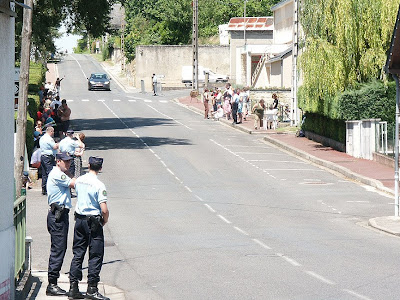 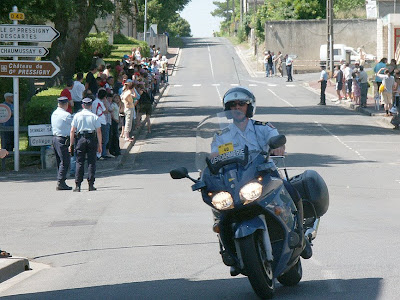 There is then a pause during which the occasional sponsors car, official car or police bike wizzes past. 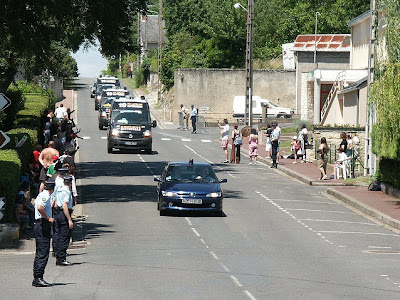 After an hour the official "caravanne" blasts past - all pumping music, dancing girls and free gifts. I now have so many bags, hats that dont fit me, free copies of newpapers, minipackets of sweets, laundry detergent, keyrings........... The one that impressed most was the man from Vittel misting the bystanders with cold water. 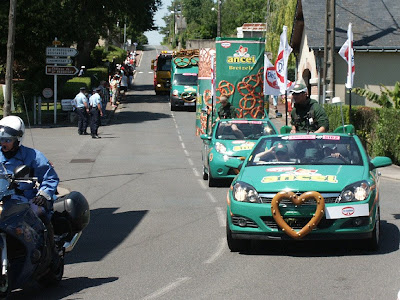 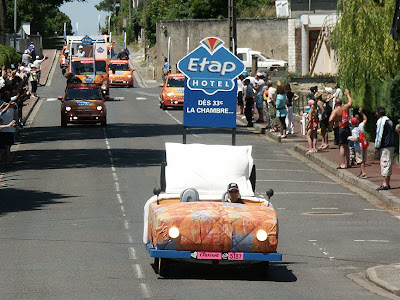 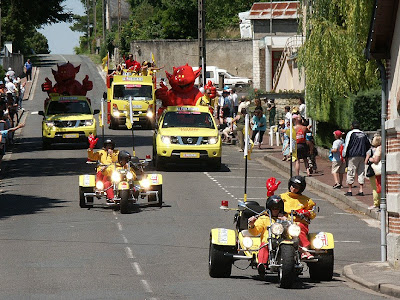 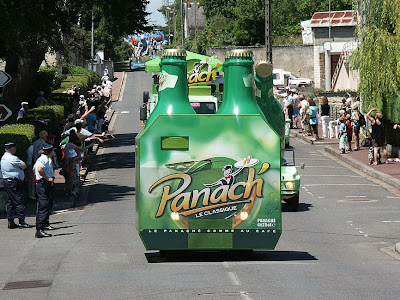 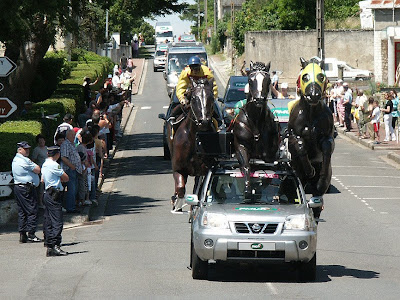 After the caravanne has past there is a wait of about an hour, interspersed with more officials, police bikes, photographers on bikes, and rumours of impending arrival of cyclists. Then the street sweeper arrives. 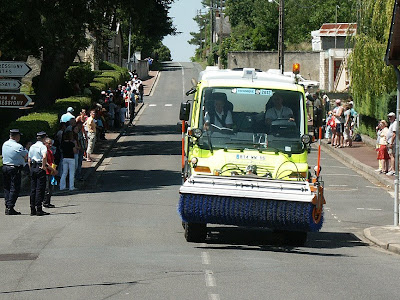 There is then a couple of cars and vans making announcements you can't hear properly and wouldn't understand anyway telling you how far away the cyclists are. And then the cyclists arrive.

First the leaders, surrounded by camera motorbikes and cars with spare bikes on the roof.

There is a pause of about 5 - 10 minutes, then the peleton (all those not leading the section) arrives and screams past. 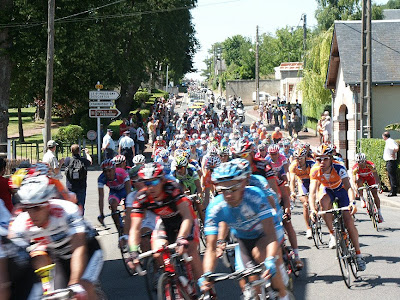 They are followed by support vehicles carrying spare bikes, first aid cars and breakdown trucks (and more police on bikes) 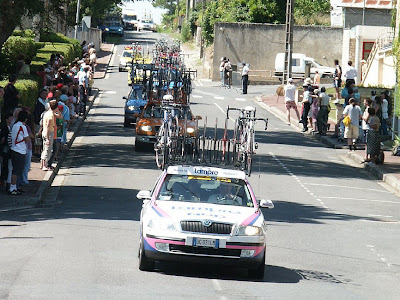 And then the day is over. Two hours of standing in the sun, getting carried away and waving at cars full of policemen, and wondering about why it makes you feel you have witnessed something so special.

Simon, we recorded yesterday's coverage of the Cholet-to-Châteauroux leg of the Tour. We saw some very nice aerial footage of Preuilly, Le Grand-Pressigny, and Azay-le-Ferron. We are going to try to get some of that video onto our blogs over the weekend. Ken

I would love to see that. My father recorded it in Australia, but they cut away for an ad break just as the peleton hit Preuilly.

You should be able to spot us from the air - right on the entry to town with a red and green umbrella.

I will be disappointed if I cant see me!!

That is just amazing...wish my husband would even consider a move...

You can tell I was operating using "wobble-cam"