Although both theses beasts present in scarlet and black stripes, one is a beetle (on the left) and one is a bug (on the right). 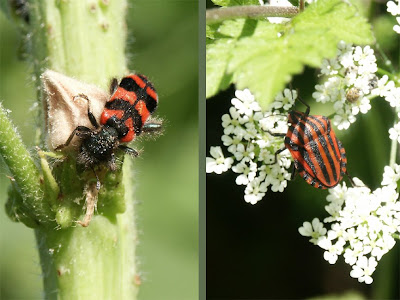 The rather hairy beetle was photographed in June in a friend's garden at Roux, near Preuilly-sur-Claise. It is Trichodes alvearius, a common beetle of flowers, especially umbellifers (although in this case, on a hollyhock). Both adults and larvae are carnivorous and predate bees and their larvae. I confirmed the species using a key sent to me by my friend John (who spent his holidays in the 1990s surveying water and reed beetles in la Brenne). The key was in German, but I'm sure the challenge has made me a better person.

The bug is Graphosoma italicum, also abundant on umbellifers - this one is on Rough Chervil. According to my friend Big Ger, Interpretation and Infrastructure Officer at RSPB Rainham Marshes, this guy is wearing Dundee United strip. Curiously my field guide doesn't mention this connection, but does point out that the colour is a warning of foul taste. The photograph was taken in May at Montrésor, one of the 'plus beaux villages de France' and always a good place for a spot of demoiselle watching.

PS Can someone tell me whether the 't' in Montrésor is sounded or not? I had always assumed it was, thinking it was 'trésor' as in 'Trésor public', (and therefore Treasure Mountain) but our blogger 'neighbour' Ken's post on Montrichard set me wondering.

Rough Chervil
Chaerophyllum temulentum - 'chaero' = 'to rejoice', 'phyllum' = 'leaf' - this is a 'Lego word' according to Wordsmith ie a word created using combining forms; 'temulentum' = 'drunken'. (No, I've not tested it, and the bug wasn't behaving inappropriately in public.)
Le Cerfeuil penché - 'leaning chervil'.
Posted by Susan at 10:00

I don't doubt Ken, so I think perhaps the "t" in Montrichard is pronounced because the words Mon and Trichard are joined. I just made this up. Is it even a possibility? "Trichard" is not in my paperback dictionary, which weakens my case, but I hold out hope that the word might show up in a better dictionary. No, no, don't thank me.

Louise - trust your dictionary :-) I think the Richard is probably Richard the Lionheart, btw. But I agree with you that Ken is to be trusted regarding the pronuciation (C-H says his French is perfect :-)

Katarina - the clue to the difference between bugs and beetles is in the title. Beetles have mandibles (jaws) and chew their food. Bugs have probosci (a tube for puncturing and sucking).

The T in Montrichard is pronounced. It seems to be an exception to the rule about the T in Mont + name. For example, in Montréal the T is not pronounced.

I hear people here saying MonTrésor so I assume it is as has been said Mon + Trésor.

The Michelin Guide says to pronounce the T in Montrichard. So does my Larousse pronunctiation dictionary.

Oops, extra T in "pronunctiation" — it is meant to be silent!

Susan, the meaning of "bug" is not clear to me. According to the American Heritage Dictionary, it means:

1. A true bug. 2. An insect or similar organism, such as a centipede or an earwig.

What is "a true bug", do you know? For Americans, bug is a generic term describing insects, spider, centipedes, etc.

In French wikipedia they also say it's an exception in pronounciation (http://fr.wikipedia.org/wiki/Montrichard). On other sites I found that the MON-TRI-CHARD means 'my château with three donjons' or that it's coming from some german origine like MON-TRICHARD.

Ken - I've always blythely pronounced the 't' in Montrésor, so it's reassuring to hear that other people do too.
As you say, 'bug' is used as a generic term to mean 'invertebrate' or 'arthropod' in the US. It is now fairly widely used that way in other English speaking places especially if dealing with children. The leading invertebrate conservation organisation in the UK is called Buglife, so I guess we are doomed to explaining that there are 'bugs' in the generic sense and 'true bugs' in the specific sense for ever more. Beetles and true Bugs are two different Orders in the Linnaean classification system for the scientific naming of life forms. Beetles are Coleoptera ('sheath-winged')and Bugs are Hemiptera ('half-winged'). This means that there are major taxonomical differences between a bug and a beetle. The most obvious of these are the mouth parts, as described above, but in general beetles have one pair of wings converted to hard wingcases called elytra, which protect the other pair of flimsy flying wings over the abdomen. Bugs have this to some extent, but are not so hard, and mostly the flying wings are not completely covered (this is much rarer in beetles). Beetles and bugs have quite different life cycles too. Beetles lay eggs which develop into grubs (larvae) which transform into adult beetles. Bugs lay eggs which hatch into nymphs which look sort of like the adult bugs, but not quite. As they develop they shed their 'skin' a number of times, each time to reveal a new 'skin' which is a little bit more like the adult. (Check out your gendarme bugs - they are mostly nymphs at the moment. Watch them change over the coming weeks to adults and you will see what I mean.)
Susan

Sorry, but I'm french and "Montrichardaise" also...
And its name came from "Mons" like a small mountain and "Trichard" like cheater, and the T is pronounced.
Big mistake in the S. Spielberg's film "catch me if you can" with Tom Hanks and Leonoardo di Caprio ;)

So we are all agreed -- the T in Montrichard is pronounced (and in Montrésor as far as I can tell). It's good to have some input from a local. I'm sorry I don't know the film you mention, so I don't know what Hanks and Co get to mispronounce.