Being pragmatists, and seeing as Bastille Day was a Monday this year, Preuilly held its Bastille Day celebration on Sunday evening. 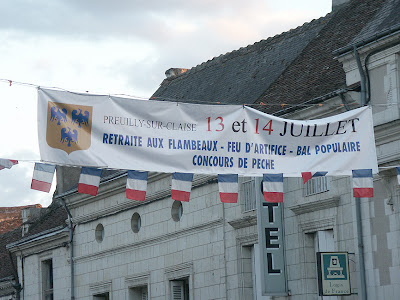 And just as well!

The evening kicked off at 9.30 with a large number of the townfolks assembled in front of the Mairie and the pompiers selling paper lanterns to the kids. There is something amusing about seeing a pompier festooned with lanterns - usually they are so butch! 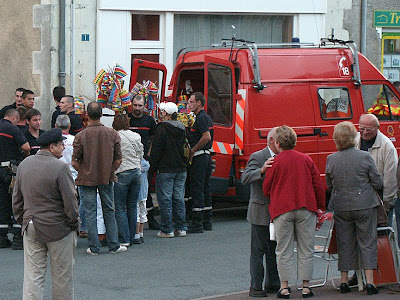 The local kids' circus school (I assume) then entertained us, with "Bandtastic", a brass ensemble (who were, incidentally, really good) from the Brenne providing the soundtrack. While this was happening the Pompiers were blocking traffic, lighting flaming torches and selling lanterns - all very convivial , and the kids getting more and more excited. 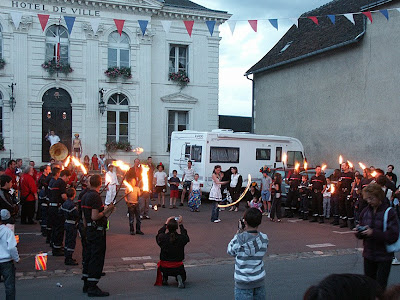 Then we were off! 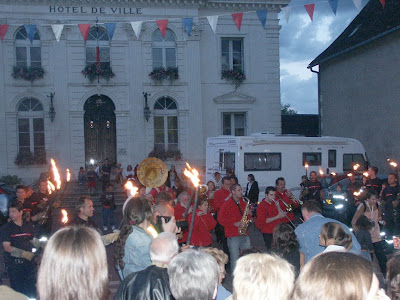 Susan and I had decided that a Retraite aux Flambeaux meant we were going to be burning down the old people's home. Not to be...... Instead, we paraded behind the band and pompiers, via a circuitous route, to the chateau where the circus school put on another performance. (As everyone of importance was carrying flaming torches, there were resonances of the first Bastille Day. I wonder if this is symbolically important?) 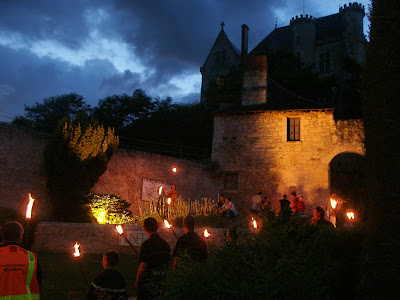 We then paraded back to the Town Hall via both bridges, holding up all the traffic through town with the Pompiers out front, and the Gendarmes bringing up the rear. By this time we had picked up people as we passed their homes and most of the people in town capable of walking the route must have been walking, because it took about 10 minutes to pass the front of the Abbaye.

After another circus performance in front of the Mairie, we paraded to the plan d'eau, where a large marquee had been set up, as well as a bar and BBQ run by the pompiers.

There was then a spectacular firework display, which took me by surprise as I had heard talk about how dull the displays had been in years past. True, it wasn't "Rivers of Fire*", but either the display this year was a cut above the norm or I am less demanding than some, because I was well impressed. 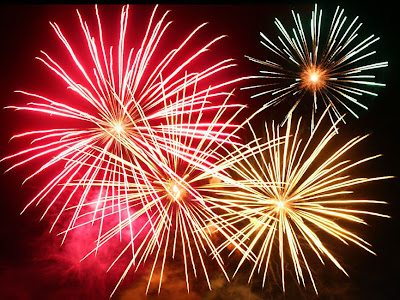 The evening finished with dancing to a band in the marquee. I have read in books about the way the French dance, ie; you must do the right dance to the particular tune being played, especially the "rock and rolling". This appears to be not strictly true in Preuilly, but I was amused to see a dancefloor full of people doing the Madison (I think - it's been a long time) to "Just a Gigilo". It was really good seeing all generations on the dancefloor together, including some very tasty footwork by some of the town's more senior (and in Preuilly that means very senior indeed!) residents. 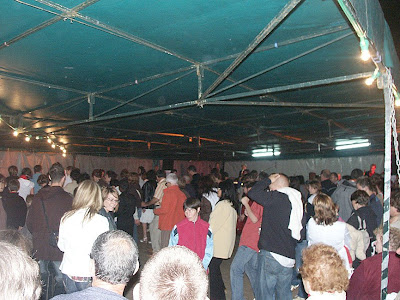 I left at 12.30 but the party was still going at 2.00am, and judging by how quiet the town was on Bastille Day itself, it must have been going really quite strong!

I don't know who organised the evening, but congratulations to whoever it was. I thought it was great.

It looks great, Simon, with great photos. Those fireworks do look impressive.

Thanks Ken - it looks like the social life in town is starting to blossom. This year's "Moules Frites" evening, held the weekend before, was apprently the best for years.