On Sunday, while I made the bed, I listened to BBC Radio 4's From Our Own Correspondent as Emma Jane Kirby talked to residents of Maillé. Once it had finished and I had wiped my eyes, I came downstairs to write this post.

They were remembering 25 August 1944, when 124 people in the village were massacred by German soldiers - ironically just as people in Paris were going mad for happiness at being liberated. (I note that the BBC report seems to have got the date wrong.) Those who survived are now talking - some for the first time - to a German prosecutor, who wants to uncover the truth of what happened here.

Nearly every house and farmyard was set alight and all the stock shot. Gilbert Chedozeau lost 37 members of his family. Children who survived grew up knowing they must never speak of their memories, but Gisele Bourgoing grows pansies (in French, pensées ie thoughts - for rememberance) on the site of one of the burned houses.

We have been through Maillé, which is only about 40km from Preuilly and in the same département of Indre et Loire. We stopped for Dad to photograph the new mural of metal panels outside the museum, but we were too early to go in, and had to push on to another destination. 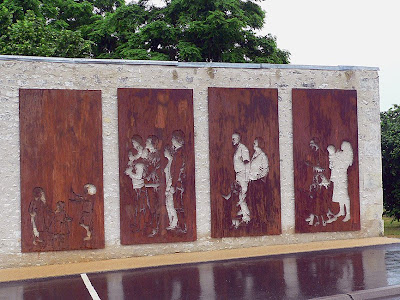 You can read the transcript of the BBC item here, or listen again at any time this week if you are in the UK.

I mentioned Maillé briefly in a previous post about Oradour sur Glane and noted that there is a website which gives the testimony of some of the survivors.

Simon's parents have emailed to say that there was an article about Maillé recently in the Canberra Times, and a television programme on the ABC (that's the Australian Broadcasting Commission, the equivalent of the BBC).
Susan

I heard this same program and was very moved by it. I thought I wonder where Maillé is, and to my great surprise found out it was about 10km away the other side of the N10.

I decided to visit that afternoon and had a look round the museum/memorial which was quite upsetting. However, I would recommend anyone who has never heard of this atrocity to spend at least a couple of hours at the museum and speak to the very genial young receptionist. It's a real eye opener and I am ashamed I lived so near and knew nothing about it.

I agree that these places are very important and worth visiting. We must remember such events and honor them.

I think this year has been a real milestone for Maillé, with the visit of the German delegation, the opening of the permanent museum facility and perhaps most surprising of all, Sarkozy's decision to not to lead the celebrations for the liberation of Paris, but to attend the memorial service in little out of the way Maillé, as an act of respectful acknowledgement of the tragedy that occurred there on 25 August 1944.