(Cont) Once the bath was filling the space where we would normally climb down off the first (or for you North Americans, second) floor, we had a little problem. We needed to be on the ground floor to deal with a half lowered bath.

Luckily, our second ladder is just long enough to reach one of the bedroom windows. 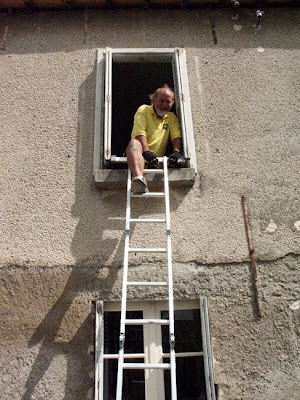 Once we were at ground level we had to do some more thinking and planning. 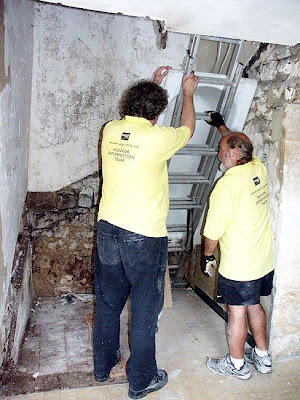 We decided that if I could take the weight of the bath off the ladder, Adrian could slide the ladder shut and we could lower the whole combination to the floor. Amazingly, this worked with very little confusion and only a little(!) physical excertion. 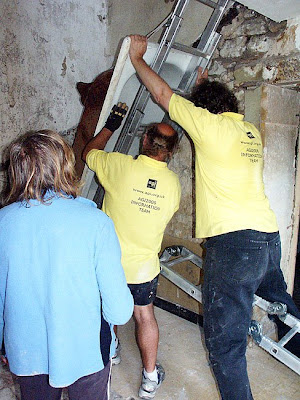 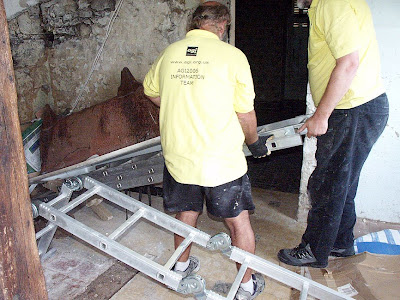 Next step was to cap the pipes as they entered the bathroom. Unfortunately, they are right hard against the wall, so we were unable to get a pipe cutter to work. We decided that a blowtorch migh be a good idea - melt the solder on the joints, leaving us with nice clean pipes to work with. Unfortunately I do not have a blowtorch, but Alan and Jane were due for drinks...... Luckily Alan DOES have a blowtorch, so in return for a couple of beers we had the tools to do the job.

After Alan and Jane had left, Adrian and I once again climbed the ladder (now back in its more sensible position). At this stage we were pretty relaxed... 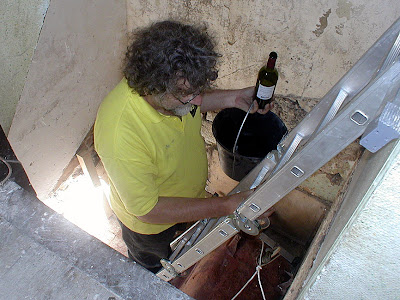 and it turns out, justifyably so. Fifteen minutes later, the pipes were capped, and we could turn the water back on. We didn't even burn the house down! 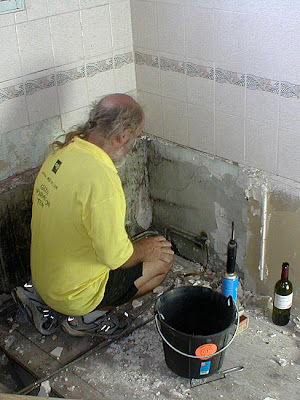 Next morning we put the bath on our new trolly (sack truck), rolled it into the garage, and the job was done.

Email ThisBlogThis!Share to TwitterShare to FacebookShare to Pinterest
Labels: Bathroom, Our house in Preuilly, Plumber

It sure must be handy to have the AGI 2006 Information Team around for jobs like that one.

Well, indeed, they are legendary, and should you wish to join the team, or even just own one of the shirts, I am sure 'on peut s'arranger', as this is France.
Susan