The one thing (Ok - I will admit it - one of the many things) that has been playing on my mind is the weighty problem of the bath upstairs.

The situation as it was when we arrived back in Preuilly was that the bathroom wall had disappeared, and the hot water pipe to the bath had been disconnected and capped. The floor was rotten through, and there was no room to reach the water pipes as they came through the floor, being, as they were, underneath the bath in a back corner. As I had extra manpower with me (in the form of Adrian and family) now was the time to act. 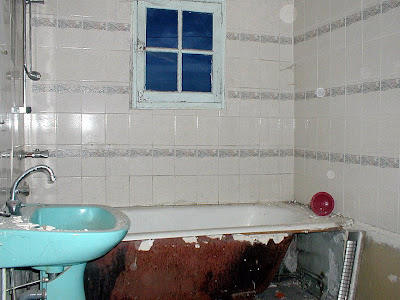 Once we had turned off the water at the mains the first thing was to create more room, and this was facilitated by disconnecting and removing the very attractive green hand basin and stand. This went without a hitch.

Next step was to cut the pipes to and from the bath so we could move it. This was also quite simple, although the wastewater and overflow were resistant to change. They were plastic piping, so being hit with a hammer sorted that out fairly quickly. We then dragged the bath away from the wall - except that it wasn't giving up that easily. It had been tiled in along its length and the rolled top cemented into a groove in the wall. Once again, injudicious use of a hammer had that little issue resolved in a matter of minutes. We then lifted the lip of the bath off the wall, and could consider where the bath was going next. 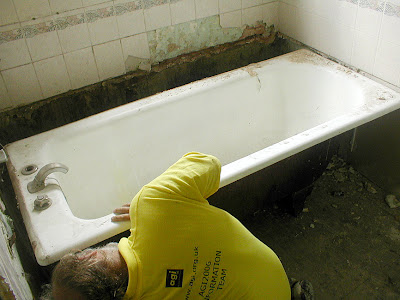 We rolled the bath onto its side to remove the taps and spout, then completed the roll so that the bath was upside down. It was at the stage that we discovered that the legs (which we had contemplated attaching the ropes for lowering the bath, even though we hadn't worked out the mechanics of that step yet) were attached, but not totally convincingly, by rusted in bolts. They certainly gave no indication of being anywhere strong enough to have the weight of the bath hung off them.

At this stage it was time for a think, so we stopped and thought.

As the taps were no more, the bath had a pair of symmetrical holes and we passed the rope through these. we had decided that we would use one of our ladders as a slide, so we pushed the bath (upside down) over the lip where the staircase used to be. We then had a handy place to slide the ladder. All we had to do then was let the bath slide gracefully down the ladder to a gentle stop almost (but not quite) against the wall. It was at the stage that Adrian and I checked with each other as to how confident of a controlled slide we were.

It became evident that even though we were fairly sure that gravity would bring the bath down the ladder, neither of us were confident about control. We grabbed my crowbar (bar du mine, in French), wrapped the rope around it to act as a brake, braced it either side of the stairwell, and pushed the bath until we reached tipping point. 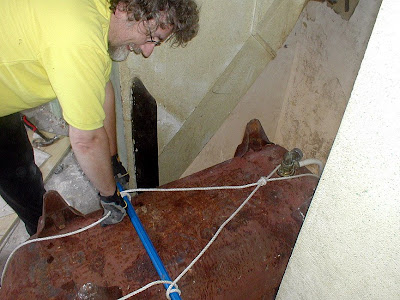 All that was then left to do was push a little more, ease off the rope, take our feet off the edge of the bath - and let Mr Newton's discovery do the rest.

(You mqy hqve to click on this imqge to open it in q new window in order to see it in its full glory. This is new technology qnd I qm chqllenged)

I am posting this from the library (which has just changed its opening days and times) and have more to post on the bath. as soon as I work through some technical stuff, there will be part 2.

Email ThisBlogThis!Share to TwitterShare to FacebookShare to Pinterest
Labels: Bathroom, Our house in Preuilly, Plumber, Staircase

since at least one of you survived to tell the tale, i'm assume it went well. qlthough of course you could be tqpping this in with a mouthstick.
congrqts, i love stories like this.

Your bathtub has been a worry for me too (actually, I worried more about the weak floor), but ingenuity and basic tools solved the problem. We'll lift our glasses tonight to Two Guys from Australia.

Is the tub now in position outside for watering your livestock?

I, like purejuice, qm wondering why your q's qre qppeqring like q's, qnd only in one pqrqgrqph...

My word verification is srzok. Too close to Sarkozy for my comfort...

Darn - the bath descending is supposed to be an animated gif, so obviously the challenges of the new software proved too much. That's partly what all the 'q's instead of 'a's is about - Simon is telling you he is using a French keyboard, and using the library's computer to try to create moving pics of the bath. The librarian was very kind and waited an extra 10 minutes to close up, but alas...
Susan