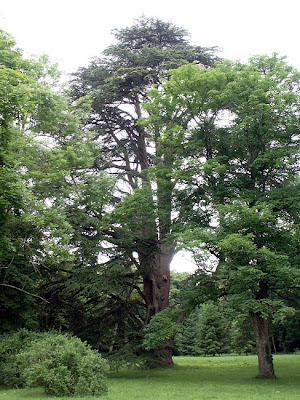 Cedar of Lebanon Cedrus libani has featured before on this blog, and not so long ago. Since it is so commonly seen in gardens and parks in France, and since there seemed be some interest in the tree, I thought I would share another nice specimen with you.
A close up of the cones. 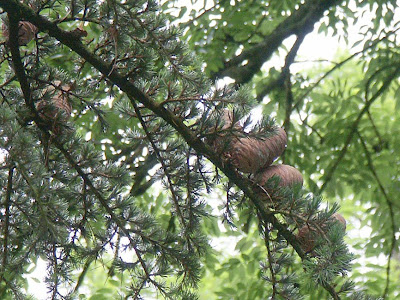 A close up of the needles. 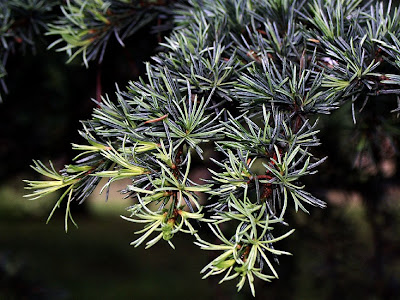 This tree is growing in the park of the Château de la Celle-Guenand. The château grounds are not obviously open to the general passing public, but we were very kindly invited in by the owner, who was up on the roof with the builder, engaged in some very serious repair work. Even though our own roof is now finished, we take an interest in the traditional craftsmanship that goes into the local slate and tile roofs, so we stopped to photograph and fell into conversation. We will post photos of the château itself and the building works at a later date.

Me and Dad indulging in a bit of tree-hugging. 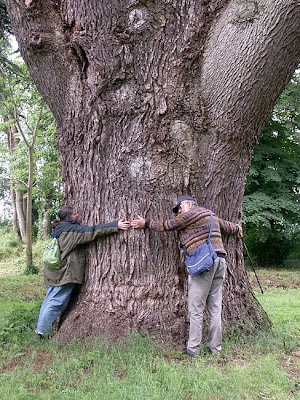 Email ThisBlogThis!Share to TwitterShare to FacebookShare to Pinterest
Labels: Gardens and Parks, nature and wildlife, Towns and Villages near Preuilly

Beautiful tree! Who's on the other side of the trunk?
Back from Mareuil and from Normandy. Will send desert flowers pictures soon. C.-H.

I love the tree hugging. Definitely gives the true picture of the greatness of the tree.

C-H - no one's on the other side - Mum was available, but would have been way too small and Simon was taking the pic. It was great to see you last month. Hope you are settling in back home OK, and look forward to some new desert blooms.

Jenny - I take it this means you are back home too? Sorry to have missed you in France, but I hope it really was the trip of a lifetime you hoped for. I will check out your blog when I have a moment.