In Praise of Bread

Bread - the one absolute staple of French cuisine.

Like most things French, bread is not just a simple matter of water, flour, yeast, and common salt - although by law these are the only ingredients allowed in the item labelled "pain". 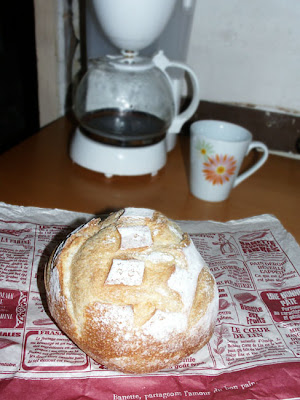 The traditional french loaf is not the baguette, nor is it the croissant, or even the "pain a campagne", it is the boule. A round loaf, usually obtainable in two sizes, the petit boule and the boule, a good boule stays fresh a long time - essential back in the days when you made your own bread, because you don't want to have to bake every day. When bread started to be baked commercially, the shops you bought the bread in were called boulangerie. (The traditional boule was naturally levened in the fashion of a sourdough rather than the modern variety using baker's yeast. Interestingly it still stays frsh quite a long time..........) 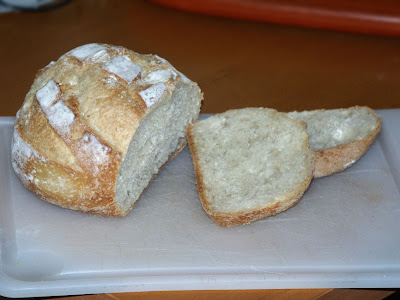 It is, though, the baguette most people think of as being the archetypal French loaf. Indeed, in some places a baguette is called a "french stick" or "french loaf". This is ironic - the all pervasive baguette only came about as the result of a technological advance made in Vienna and a law passed in 1920. In some places in france, the baguette is still known as a "vienne" (In Preuilly a vienne is the sweetened version with sultanas).

The technological advance necessary was the invention of an oven with steam injectors, perfected (or at least made reliable) in Vienna in the mid 19th century. The law was one which stated that bakers couldn't start work before 4.00, thus making it impossible to get a traditional loaf made before opening the shop for trade at 6.00. I am not sure how it is possible to make and bake a baguette from scratch in this time, nor if the law was a labour law or a law passed for the convenience of those trying to sleep.

What I do know for sure is that is is extremely difficult to stop eating good pain, fresh from the boulangerie and still warm from the oven.

This is the wrapper one of our local bakers (the small boulangerie at 4 Rue Chaumont Patin) uses to wrap bread. I guess it is the equivalent of reading the Cornflakes box. 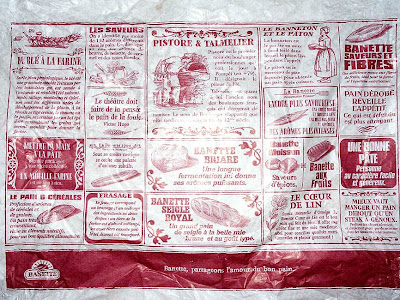 Thanks, Simon. I never thought about boulanger and boulangerie being related to the word boule, but it makes all the sense in the world. I know the baguette is a relatively recent invention. But baguettes are good, aren't they? Much more crust as a proportion of the total bread...

It never ocurred to me until I was in the boulangerie one day asking for a boule...... I was worried about it being a false friend (or equivalent) so I looked it up.

Baguettes are stupendous as long as you can manage a whole one withing an hour of buying it- but a good fresh boule is a joy for a whole day.