The French consume a lot of nuts, and three sorts in particular are grown in France - almonds, walnuts and hazelnuts. Almonds are especially widely used as they are one of the mainstays of the French pâtissier's art. All over France, almond paste or powder appears in yesterday's croissant; as marzipan, macarons or nougat; in biscuits and cakes of all sorts; and, in restaurants, swimming in the beurre noisette with fish. Almonds are not grown in the Touraine, which is walnut country, but almond trees are seen in many gardens to the south of us, in the Charente. The flavour can be sweet (milky fresh blanched almonds), moreishly nutty (unblanched dried almonds) or somewhat overpowering (almond extract). Excitingly, the flavour of almonds, like the kernels of other stone fruits, comes from highly aromatic chemicals which include cyanide. Almonds must be quite closely related to peaches, because on the tree, still clothed in their fleshy outer layer, the crop looks like rather poorly performing peaches. 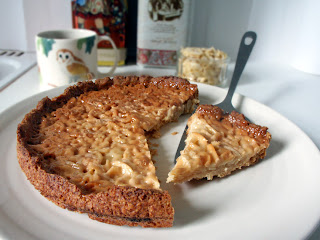 I made this almond caramel tart from a recipe given on David Lebovitz's blog. It is one that he apparently made often at Chez Panisse, the restaurant run by the highly influential Alice Waters in Berkeley, California. His instructions cannot be faulted.

(Thanks to Ken for pointing out a couple of errors in this entry, which I have now corrected.)
Posted by Susan at 10:00

Delicious, thanks for sharing the recipe

Nessie - nice to see you here, and glad you liked the recipe. Jane says you are a talented baker.
Susan