Recently I emailed Jean-Michel Chedozeau, the chef/proprietor of Restaurant de l'Image in Preuilly, to say that I had tried out his recipe for Brenne Carp Fillet with Ste Maure de Touraine Cheese and that we had found it delicious, but being in London at the time, did not have access to proper Brenne carp, and so had substituted another white fresh water fish (from Vietnam, but I forget the name). Thanks to C-H for pointing me to this recipe link which combines two regional specialities.

Jean-Michel very generously offered to get me some carp from his supplier, and so one afternoon, in return for a jar of my Lemon Curd, I picked up a plastic box containing four pieces of carp from him at the restaurant. He explained that his supplier was experimenting with a new machine for filleting and boning the fish and asked that I report back as to how many bones we found left in the fillets. He was clearly dubious that the machine was doing a good enough job for him to risk serving fish dealt with in this way in the restaurant. His concerns are probably justified - one of our pieces had no bones, but one had about 15 little pieces of bone, and the other two had about 10. As his wife Martine said, this is fine for private, home consumption, but too much of a worry for the restaurant.

The ingredients of this dish. 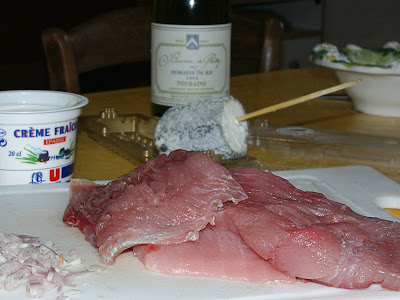 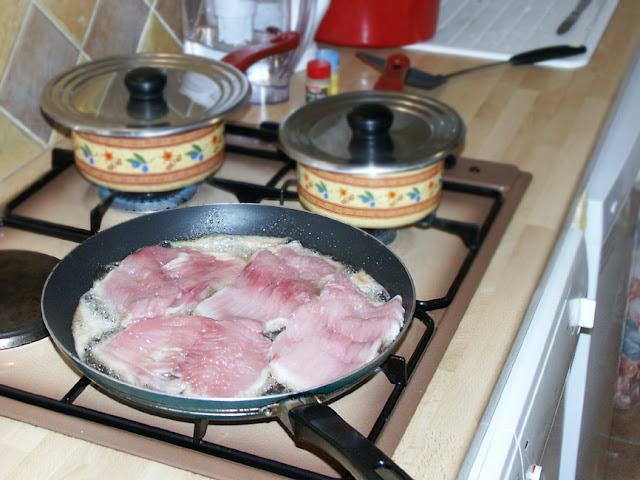 The pieces of carp have a rather curious structure, as though they have been run through a meat tenderiser. 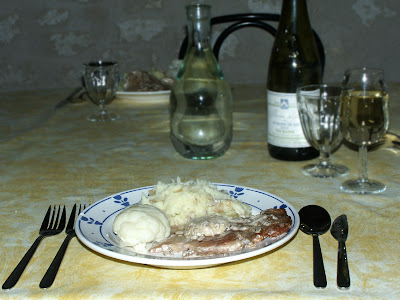 Whilst my effort was tasty, it was nowhere near as glamourous looking as Jean-Mi's original. He obviously exercised cheffy attention to detail and kept his sauce nice and white. I quite happily allowed mine to take on some of the caramel colour of the cooked fish.

Carp is despised in Australia as not being fit for human consumption, but here in the Touraine du Sud and Berry, and in many other parts of Europe, it is extremely popular, and farmed on quite a large scale in the Brenne étangs.

We have a soft spot for carp, as for many years we have had a ceramic carp hanging in our kitchen, a gift from a visiting Czech museum curator. She told me that the little carp is a good luck talisman, so we make sure we give it a pat from time to time and remind it that we need to sell our house in Australia.

In Slovakia we eat the carp as Christmas meal - we prepare it fried (as in fish and chips) and we eat it with potato mayonnaise salad. It's delicious.
Before Christmas, you can also see a lot of big "baths" in front of supermarkets and on markets with living carps - you can bring it home live or ask the vendor to kill it. Then you let it in your bath for two-three days and on Christmas Eve you prepare it for the dinner.

Katarina - Thanks for telling us about your Christmas tradition - I didn't know it before. I like carp fried too. If you have the carp swimming around in your bath does that mean that no one can wash in the few days before Christmas ? :-)) (BTW, the person who gave us the good luck carp is also Katarina :-)
Edith - if you are reading this one - did your family have carp for Christmas too?
Susan

To be honest, we had carp in my family only once - my father doesn't eat any fish with bones and my mother doesn't know how to cut and clean a whole fish. All the years we were on frozen filet. And it was two years ago when my boyfriend said that he can kill and clean the carp. My parents have two bathrooms in the house plus a bathtube in the cellar, so the carp was in the cellar. In other families, they prefer not to take a bath for some days and make happy their children.

I think carp might be quite difficult to fillet well - lots of fine Y shaped bones like herring I suspect - I've not had the opportunity to try it myself.
I enjoyed the thought of small boys going 'yeah! Carp for Christmas - no baths for a week - hurrah!'
Susan