Chatellerault is a surprising place.

A smallish (population 34,000) town near the centre of France, until 1968 its main industry was the manufacturing of arms.

Somewhere in here is a town. 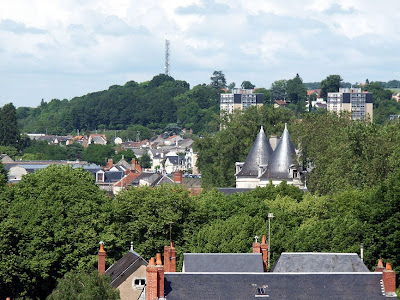 In 1816 the French Artillery Commission decided to create a new government arms factory in a safe place away from its borders. In 1819, a Commandant Notret, the last inspector of Manufacture de Versaille, started the production of tools (axes and spades), then increased production with the fabrication of swords. In 1822, the manufacture of firearms started. By 1837 it was one of two main firearms and sword manufacturing towns in France, the other being Saint-Etienne.

When the factory closed in 1968, the small town was left with a huge empty industrial complex (and presumably very few jobs).

Just part of the factory's roofs 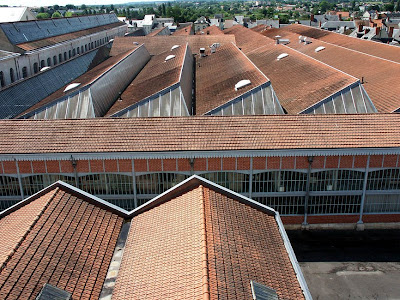 Part of the factory is now the French Military archives relating to armaments, with the rest of it being used for various social clubs, sports halls and the Ecole nationale de Cirque (National Circus school). It also house the Musee Auto-Velo, which I visited with Susan's parents and will be writing about later.

One of the outstanding parts of the factory are the chimneys which originally served the furnaces. The have been cleaned and a walkway installed between them, giving views over the town. 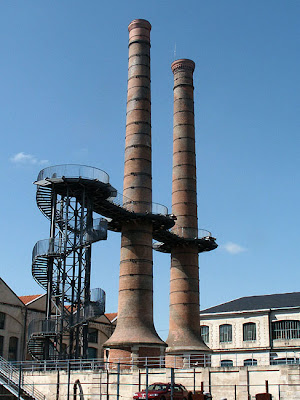 Although it is quite a slog to the top of the spiral staircase it is really worth it, because with the exception of the market square, from ground level Chatellerault isn't all that attractive. From the walkway you get a really different aspect. It also occurred to me while I was up there what good tradesmen the brickies must have been - those spirals aren't painted on, but laid in a different, darker brick. 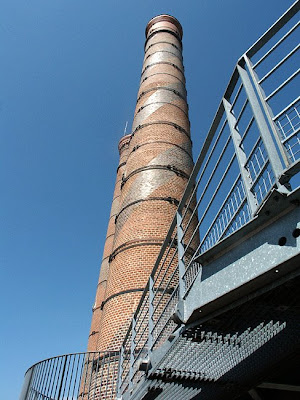 just looking at those beautiful abandoned industrial spaces made me think of the artist relocation programs some rust belt towns in the USA are deploying, with good success.

i think an artist would leap at the chance to live in the old arms factory.

here's one such program in kentucky.

Thanks for the link - I love the giraffe, and well done Paducah! I have a particular interest in textile arts, so it was nice to see a community encouraging this medium, as well as all the others.
Susan