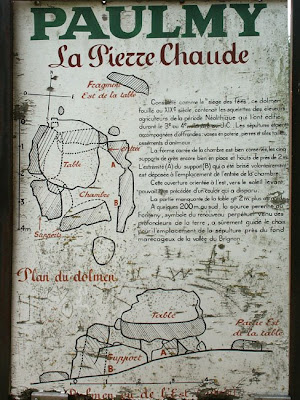 Many "dolmen" are shown on the large scale Michelin and IGN maps, but these are not exhaustive. There is, however, a great website called the Megalithic Portal, which lists ancient sites from around the world. Included are 23 sites in Indre et Loire, mainly burial sites.

This it "la Pierre Chaude" (the Hot Rock - sounds like a particularly naff 70's covers band to me, but I digress) near Paulmy. It isn't exactly unknown, or even unsignposted, but like many of these sites around the world, they don't exactly shout about it, either. I guess it is part of the conservation policy. 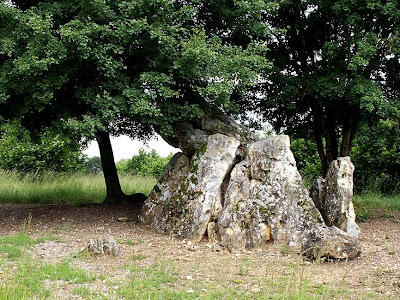 It is (or was) regarded locally as a 'fairy seat'. Excavated in 19th c, it contained skeletons of Neolithic farmer-graziers who erected the monument in the 3-4 millennium BC. Grave goods were found, including pottery vases, stone and flint knives, animal bones.

The original form of the chamber is well preserved with 5 uprights of 'grès' (sandstone) still in place to a height of nearly 2m. One of the stones has been deliberately broken to block the entrance. The opening is oriented to the east, towards the rising sun, and there may have been a passageway preceding this which has disappeared. A piece that has broken off the 'table' (the flat rock cover) is laying 2m to the north. Some 200m to the south, the permanent spring of Fonteny, symbol of perpetual renewal, comes deep from the earth, surely an indication of why the grave was placed in the middle of a swamp in the Brignon Valley. (Translation of the noticeboard at the site).

It is in the middle of a hazelnut grove, which sounds pretty witchy and ye olde majick (hazelnuts are one of the five sacred foods of ancient China, and also one of the 9 woods sacred to druids) but this hazelnut grove is a commercial orchard. 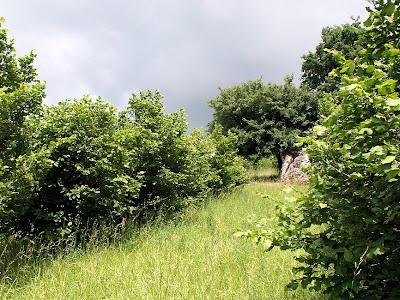 I don't know if I would drive a long way just to visit this or any of the other dolmen in our area, but it offers a good excuse to get out of the car and stand there looking contemplative if you're in the vicinity.