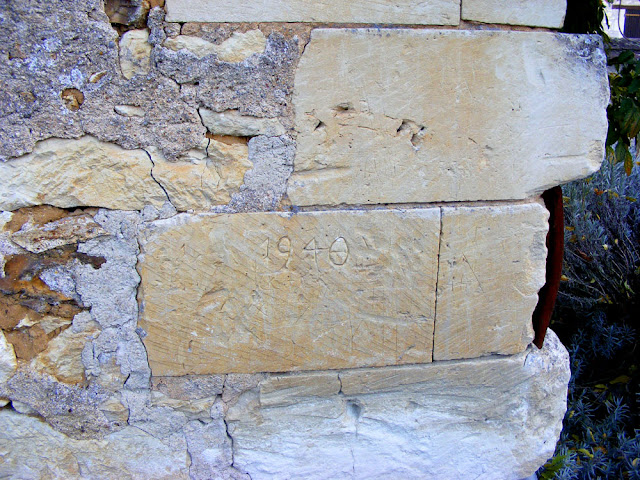 I noticed this inscription carved into a wall at about waist height in Les Viaullières, a hamlet near Chaumussay. I asked one of my companions, Joël, if he knew the story behind it. He usually knows the history of this sort of thing, but in this case, he did not. What he did tell me was that German prisoners of war had made the road we were standing on, but that would be a few years after 1940. So the date remains a mystery unless some knowledgeable reader can enlighten me.


The reference to German prisoners of war building roads in the area was the second conversation of this sort I'd had in the space of a few weeks. Jacky Foucher had also mentioned to me that they had built the road down from the Preuilly - Le Grand Pressigny road to Chaumussay, past her grandfather's farmhouse at Les Reuilles. As usual, she chipped me about my pronunciation of 'Reuilles'. It should sound something like 'rher-yuh' but I have a tendency to pronounce it 'rher-yee'. According to her it is an old word or a corruption of the word for 'stream', which is 'ruisseau'. I wonder if 'reuilles' is connected to the English word 'rill' in that case?

This must have been in early 1940, because I don't think there would have been many German prisoners of war left much longer after the invasion of France in early May of that year.

That same sound in Reuilles is also found in deuil, mourning; feuille[s], leaf/ves; cueille[s], I [you] pick; seuil, threshold; veuille[s][ent] (subj.), I [you] [they] want to, as well as in Preuilly and Neuilly (near Paris

Thanks for the explanation of the date MB. The line at Chaumussay ran past les Reuilles, as I am sure you know. Jacky Foucher's grandfather was the owner of the property there during the war and often had to feed the German border guards (much to his resentment, and he always refused to sit at the table with them). My impression from talking to both Joel and Jacky that the prisoners of war were German and they were talking about the end of the war, but maybe I have misunderstood. Do you know who built these roads and when?

Actually.... I wonder how that might work with the scrafitti at Les Hautes Thurinieres.... I’ll send you the picture via FaceEater!