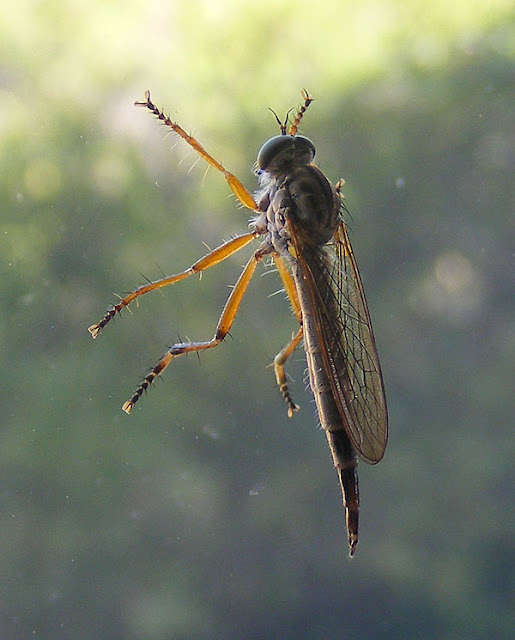 This is a female robber fly that I photographed on a sliding glass door in Canberra. I think it's Cerdistus sp, but the females of this genus are very difficult to tell apart, so I will never identify it to species level. I've contacted my robber fly guru, Reinoud van den Broek, the Dutch specialist in Asilidae (robber fly family) but I'm not holding out much hope that he will be able to identify it from a photo.


Cerdistus are 'classic' robber flies. They belong to the largest, most typical and most difficult subfamily Asilinae. Members of the Cerdistus genus occur in Europe, North Africa and Australia that I am aware of.


Robber flies are highly efficient hunters, preying on other flying insects and sometimes spiders. They possess stabbing mouthparts that can deliver a toxin to immobilise their prey. They do not attack humans although in the unlikely event you could catch one in your hands they are capable of piercing skin. The toxin they can deliver has no effect on humans. For such large and widespread flies there is remarkably little known about their life cycles.

That is a really nice photo.

Thank you. It's been worked on a bit because of course the light is in the wrong direction, causing silhouetting.