What Would Villandry Do?

For a couple of years now a serious pest has been present in gardens in the Loire Valley. The invasive alien Box Tree Moth Cydalima perspectalis (Fr. Pyrale du buis) appeared in France ten years ago, but really only made a visible impact more recently. It's everywhere in the forest now and gardens such as Villandry, with their metres and metres of European Box Buxus sempervirens (Fr. buis) hedging, have to be right on top of managing it or the garden would be ruined. 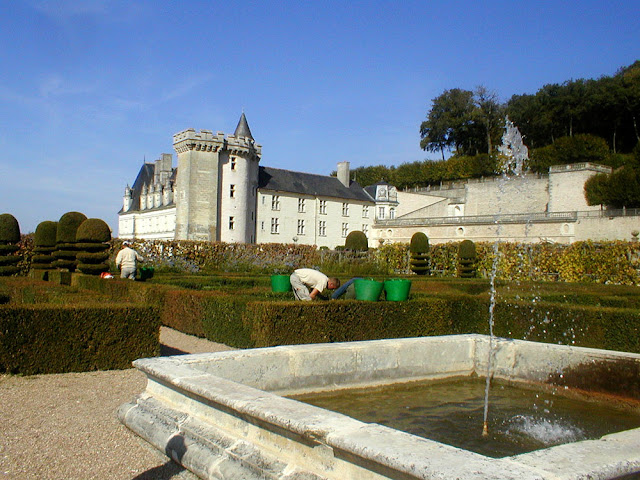 Last week the gardeners were out and about weeding and I stopped to ask one of them how they were coping. He said there had been a major outbreak of the moth in the spring, but the summer had been better. At Villandry they treat once a month with Bacillus thuringiensis and will have to continue doing so now forever unless an effective new organic treatment becomes available and assuming the moth doesn't develop immunity. Bt, as it is known, isn't ideal, as it is not specifically targeted for Box Tree Moth, so it will kill any other lepidopteran caterpillar it comes into contact with. Aerial spraying of it over commercial pine forests to control Pine Processionary Moth Thaumetopoea pityocampa (Fr. Processionnaire du pin) has been banned in France for this reason. I assume, since the garden is organic, they are using one of the naturally occurring subspecies of Bt, not one of the genetically modified strains.

Email ThisBlogThis!Share to TwitterShare to FacebookShare to Pinterest
Labels: butterflies and moths, Gardens and Parks, Pictures of Chateaux