I couldn't get over the number of species of gentian we saw in Switzerland. I thought we would be just that bit too late in the season by July, and I'd be lucky to see one. Looking on the Swiss InfoFlora website tells me that there are 24 species of gentian recorded for Switzerland. I haven't managed to identify and count up all of the ones we saw, but I reckon it was about half that number. 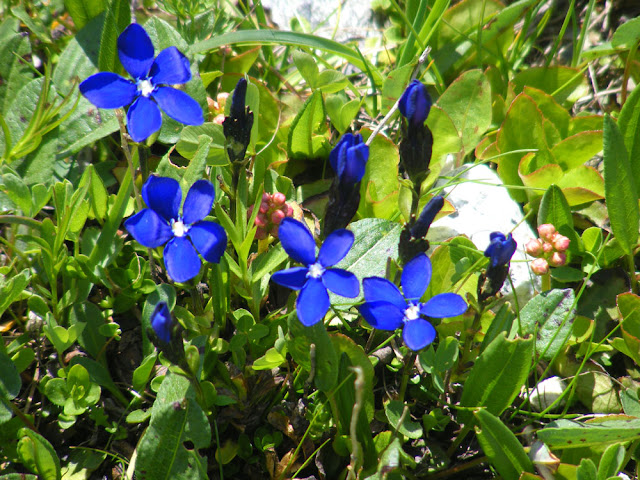 This one is Bavarian Gentian Gentiana bavarica, quite abundant in the very high damp grassland above 1300 metres. The one in the photo was at the top of Nufenen Pass, but I think we saw this species elsewhere too. As it happens, they were at their peak, being July and August bloomers.

I just adore gentians.... nature’s true blues (amongst others).
This is a stunner...

I was blown away by them -- and the fact that they photograph true as well, instead of going mauve like my Siberian Irises do.

Blue is always hard for me to photograph. You're done well; the color shows up spectacularly here.

These gentians are beautiful and the true blue seems to be genuine.

I've had the same problem with cornflower (bleuet). And couldn't even get the right shade with Photoshop. Maybe a technician could tell us why the color blue is so hard to get right with digital cameras.

Siberian, as well as all the other “blue” irises, contain magenta.... which is why they “purple-up”.... to get a true blue from your sibbies, you need to borrow one of my analogue Pentax cameras, a 50mm lens and buy yourself a roll of Kodachrome 50 slide film.... or else, use a very pale blue filter on yours.
Kodachrome is about to be re-issued next year in 35mm format!

chm.... It isn’t just digital.... gentians contain no magenta in their blue... all other commonly seen flowers do.... and it isn’t restricted to digital.... the best film for real blue was Kodachrome 50.... all others needed a blue filter... if you look at old photos of old world bluebells, you will notice that the foliage is an unnatural blue-green.... even Kodachrome 50 rendered greens badly, but there was no need to mess with blue filters.

Thank you Tim for the information. I won't complain any longer :—)