First Fungi Foray of the Season

Photos from the Association de Mycologie et de Botanique de Sainte Maure de Touraine fungi foray in the Foret de Preuilly on Sunday 30 September 2018. It has been so dry that we recorded a mere six species. No one can remember the species numbers being so poor before. Ten times that number would be normal.


Paul rummages in the grass amongst the oaks for bolets. 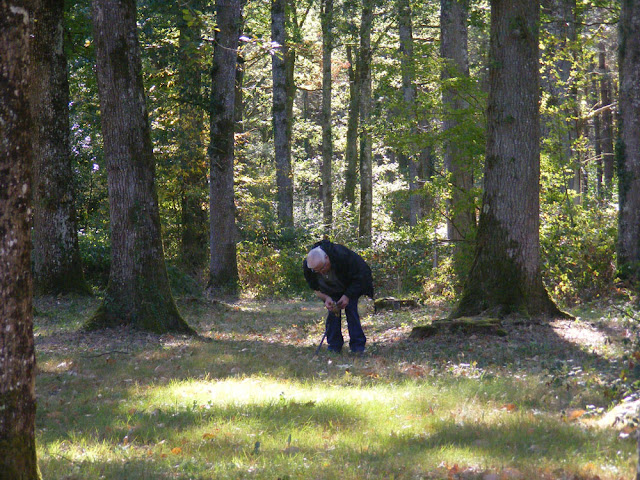 Jeannine surveys an oak for lichens and mosses. 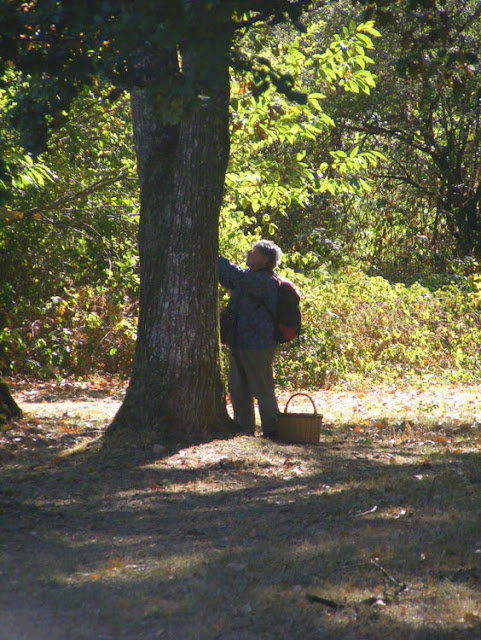 Paul and Jean debate the identity of these large mushrooms. 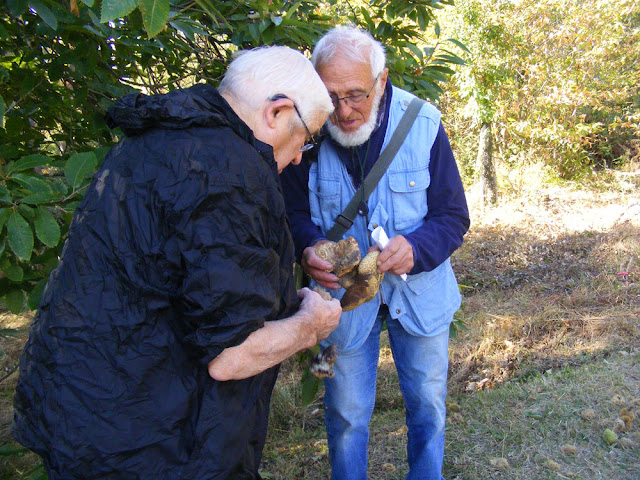 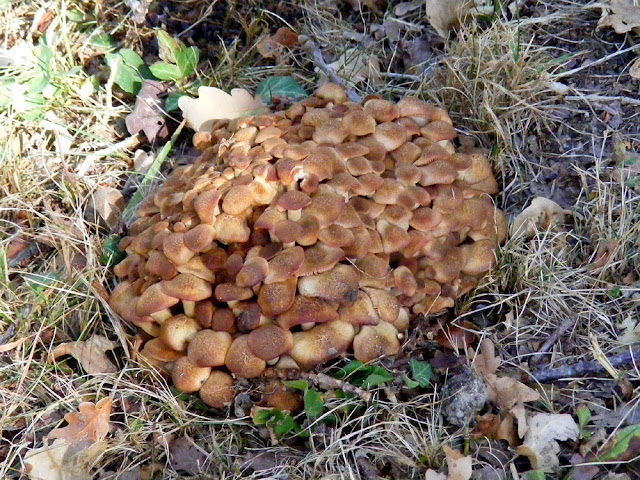 Like all the Armillaria species (honey fungi) this is a parasite on tree roots. It's not fussy and will attack almost any tree. After I had photographed it Garance (aged three) asked if she could crush (écraser)  it. I said no, because Paul and Jean wanted to look at it. We then discussed if the strip of asphalt was the road. I said yes it was and if we went down that way (pointing to the left) we'd get to my place. 'You live down there do you?' queried Garance. 'Yes', I said. 'Et moi, j'habite chez moi !' ('And me, I live at my place!') she responded. This made me and her pharmacist father Loïc laugh, but as I pointed out to him, it was perfectly logical. Garance was getting great Dad time and Loïc is starting early to introduce his daughter to the wonders of nature (a praying mantis was a great hit later). She was also out with Dad in order to give her little baby brother Basil a bit of peace and quiet.

Looking at a plant in a ditch. Loïc and Garance in the middle. 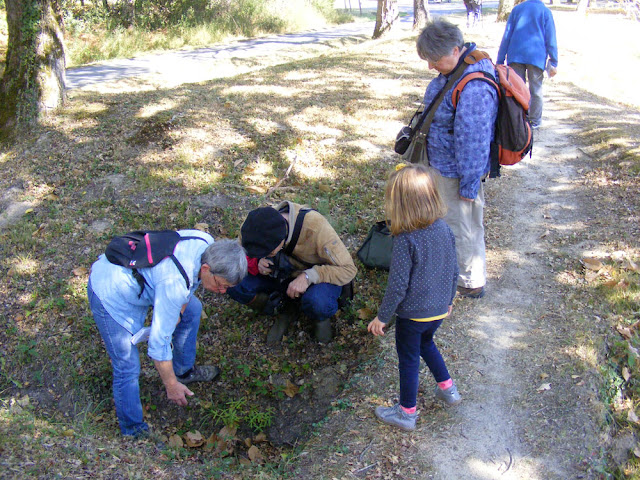 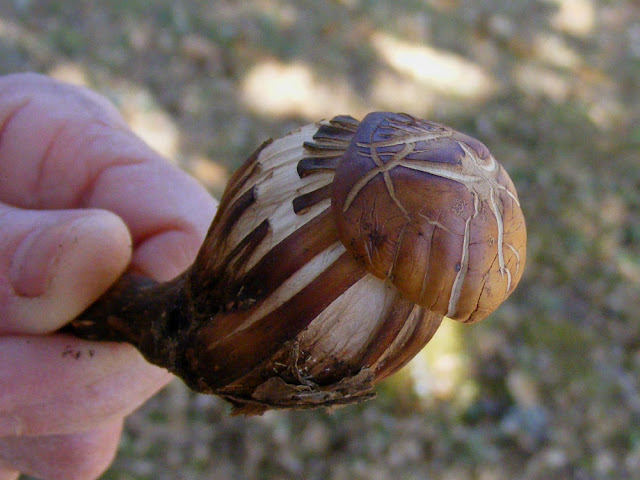 The Spindleshank Gymnopus fusipes (Fr. souchette) looks like it has some weird deformity or mutation, but this strange swollen and ridged stem is normal for this species. It is a parasite of oak trees. 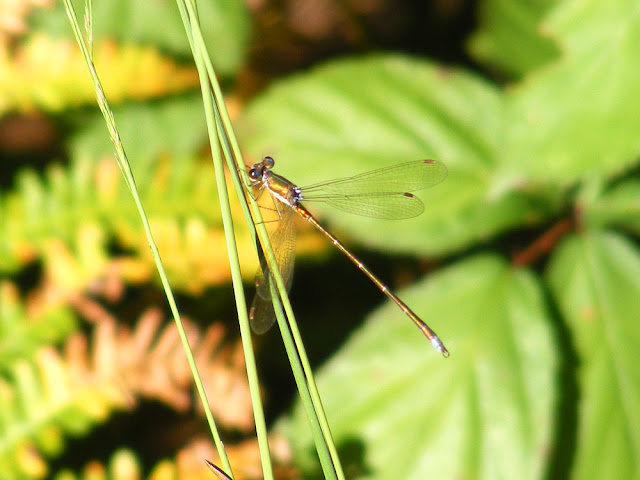 The Small Spreadwing Lestes virens (Fr. leste verdoyant) is a common late flying damselfly in this area. At least one other species of spreadwing was flying, as well as a couple of darters (Sympetrum spp) and Skimmers (Orthetrum spp). 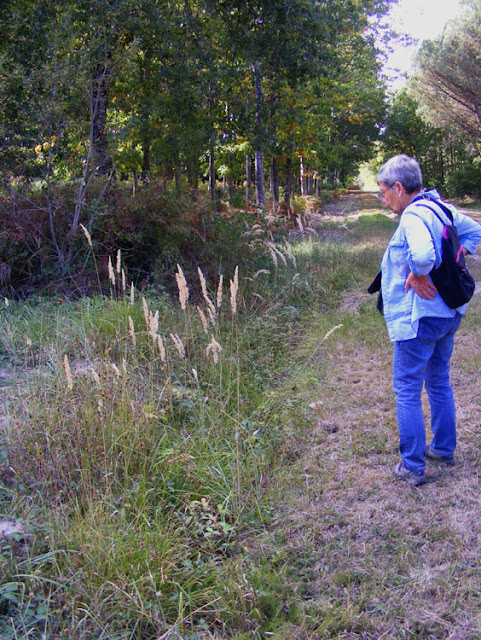 Wood Small-reed Calamagrostis epigejos (Fr. calamagrostide commune) can be found growing as a native from Great Britain to Japan and Africa. It is a large and attractive species of grass which is also cultivated as an ornamental in gardens. 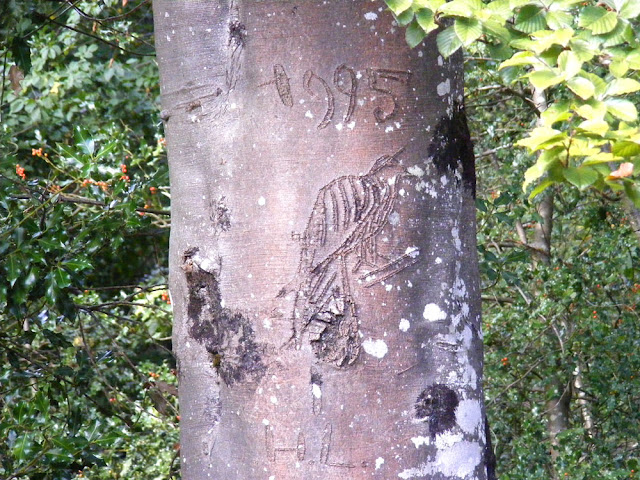 H.L. presumably carved this partridge into a hornbeam tree in 1995.


The pathetic haul for this outing. 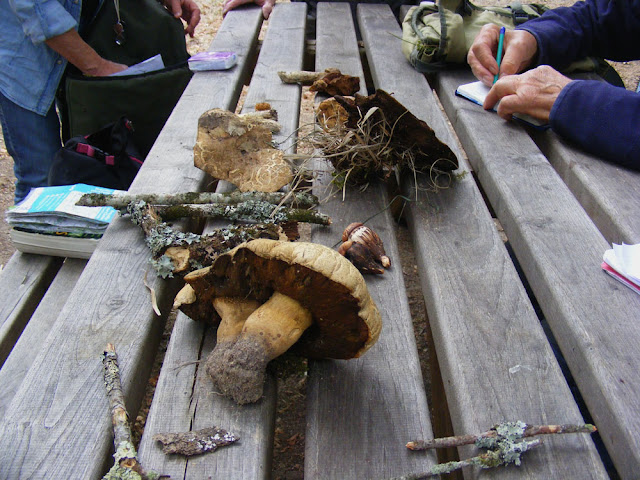 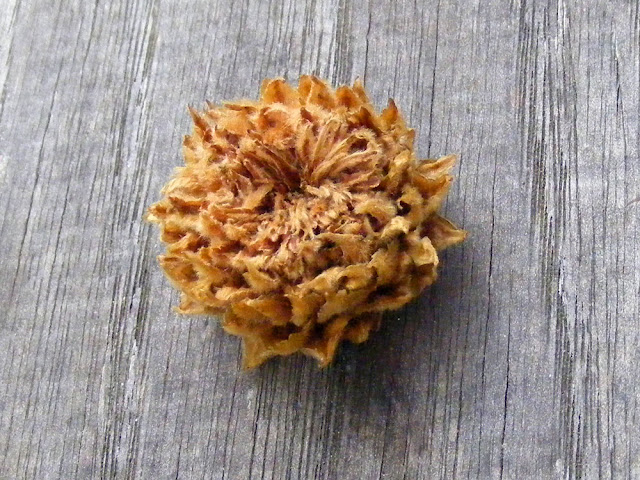 Oak Artichoke galls are caused by the cynipid wasp Andricus fecundator laying its eggs in oak shoots. The plant reacts by forming a growth around the 'invader', which in this case resembles a miniature artichoke flower.

For more photos of the outing you can see Andre's photos and Louisette's photos.

Great you had a youngster along. The group should try to encourage other young people to attend otherwise it will be another lost art. (especially looking at the age demographic ha ha)

At least one pharmacist is interested in fungi and passes his knowledge to his children.

We do try and encourage younger members. For the botany side it's not a problem, but mycology is proving much less attractive. We've got our exhibition on this weekend in Ste Maure, but I bet it doesn't result in any new members.

Yes, Loic joined the group when he was a student, in order to be mentored by Paul and some of the other retired pharmacists in the group.