A while ago a storm damaged the roof of the pergola at the orchard, then the Aged One ran into one of the uprights with his slasher and snapped the post in two. Meanwhile, one of my water butts split and leaked all its water out and the pallets the butts were sitting on started to collapse due to rot. It was time to call in the professionals.


All neat and tidy. It hasn't looked like this for ages. 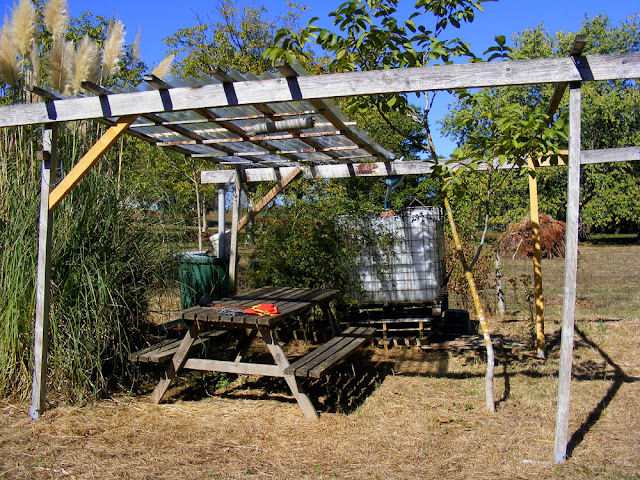 I contacted Alex and Nicole to ask their advice on how to fix it all within my meagre budget of a few hundred euros. I already had a stock of suitable wood to repair the post and strengthen the whole structure and we tossed a few ideas around. I also had five pallets they could use. I gave them the go ahead to do the work in September and they let me know when they would be there. We were working, so any problems that arose they would have to solve for themselves.


The new water butt arrangement. I especially like the watering can hopper. 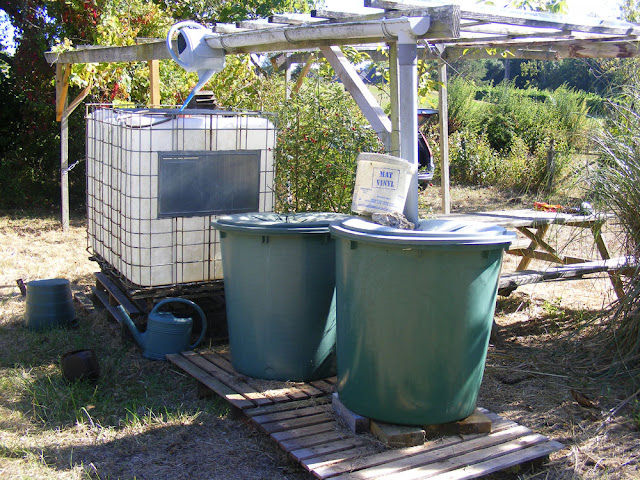 I'm very pleased with the practicality of their reworking of the water butt arrangements and they have braced the pergola so it looks less precarious. They've replaced the roof with similar clear corrugated sheets (with the caveat that they won't last more than a couple of years), strimmed the whole area so it looks neat and connected up all the water butts. The butts have also been moved at right angles to the previous arrangement.