Fort Denison is an island in Sydney Harbour, and has long been somewhere I have wanted to visit. When my family moved to Sydney it was something to look at and imagine ghost stories about - it is only relatively recently that plebs like us have been allowed to visit. We didn't get there last year, so I guess we have to write it on our list. My father and brother have been so I feel I am missing out. (To be honest, I didn't even investigate visiting because I didnt think it was possible.)

Fort Denison. Most people only knowing from passing it on a ferry. 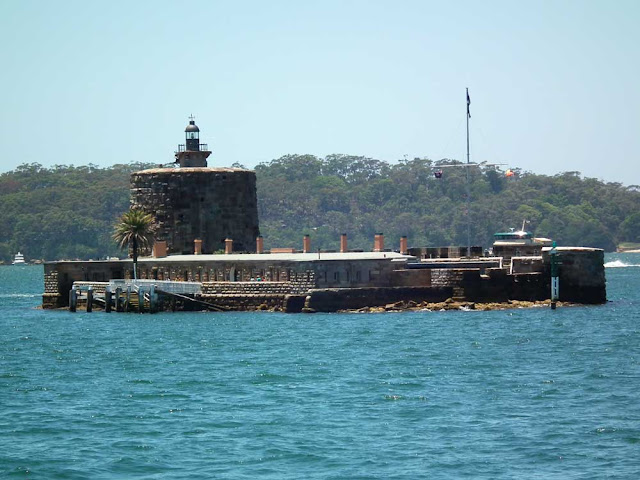 The fortress features a Martello tower, the only one ever built in Australia and the last one constructed in the British Empire. It is built from sandstone and the walls are between 3.3–6.7 metres (11–22 ft) thick at the base and 2.7 metres (8 ft 10 in) thick at the top, but the fort was obsolete by the time it was completed. The tower had quarters for a garrison of 24 soldiers and one officer.

Before the tower was built the island was known as Pinchgut and served as a prison (and as the town gibbet) but as far as I can tell only one person was ever sent there. These days there is a navigation light on top of the tower.

Thank you Simon for this post. It sent me on a research spree about what was a Martello tower. I found out that the Italian sounding name comes from a misspelled or mispronounced Genoese fort in Mortella, Corsica, before the island was bought from Genoa by France in 1768. Very interesting.

And, as you say, these extra-strong towers were built by the British all over the world

Ignorance on my part; I had to look up the word 'gibbet.'

Thanks for going to London. Must have been quite an experience. Today's Observer has a great editorial calling for a second referendum. Just in case you missed it.

Gibbet in the same in French, except there is only one B. The best known gibet in France was the gibet de Montfaucon in Paris. The medieval poet, François Villon, wrote about it in one of the best known poem in the Franch language, la Ballade des pendus.