One of the most interesting things last year at L'Art et Lard, the art and food festival held annually in Le Petit Pressigny on the second Sunday in October was this Giant Puffball Calvatia gigantea (Fr. Vesse-de-loup géante). 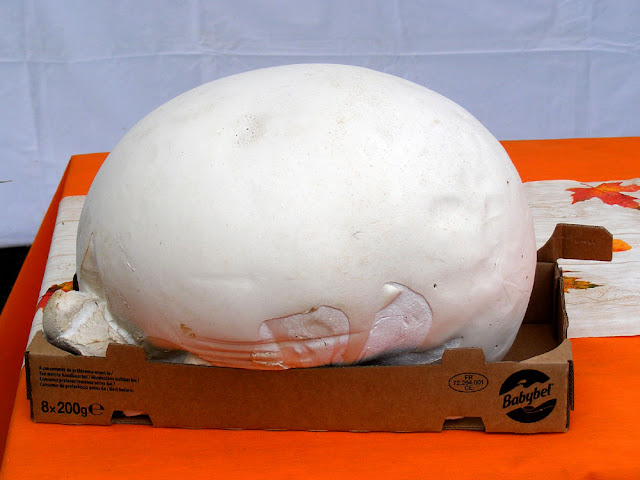 It was sitting all alone on a table in with nothing else around it in a thoroughly random way. No indication of what it was or why it was there.

Giant Puffballs live up to their names and can weigh several kilos (I think the biggest recorded was a metre across and weighed 25 kilos). They tend to reappear in the same spot or nearby, usually rich pasture, year after year but they are not particularly common. Their consistency is like that of a high density foam, and probably for that reason they have been used in traditional medicine as a dressing to stop bleeding. They are reputed to have styptic qualities, like Bitter Oysterling, which actually close blood vessels up.

They were also traditionally used as tinder, to hold a glowing spark for firelighting like the better known Tinder Fungus, or more often, to create smoke when beekeepers were working with hives.

Wild foragers love this fungi. Not because it has an extraodinary flavour, but because its spongey texture allows its use in dishes in much the same way as you would use tofu, for example, to carry other flavours and add a meaty bulk and texture. When they are young, fresh and pure white inside, you can peel them and eat the flesh either cooked or raw. Once they are no longer pure white (starting to go yellow and finally brown inside) it means the spores are developing and they are no longer suitable to eat.

I highly recommend you spend some time at L'Art et Lard if you are in the area on the second Sunday in October.

Email ThisBlogThis!Share to TwitterShare to FacebookShare to Pinterest
Labels: Events, Food and Drink, Towns and Villages near Preuilly

I've seen puff balls around here too, but never that big. I guess I should try eating one if I see some again. Probably too dry for them this fall.

Take it to the pharmacist before you do anything with it, to be sure!

Only bother to take it to the pharmacist if they have an interest in fungi. The mycology module at university isn't mandatory any more and most pharmacists don't do it these days, so they don't know any more about fungi than you do. Strictly speaking they are supposed to tell you to chuck any fungi you come in with and not eat it. French people of course believe that this is a ruse so the pharmacist can offer to take your fungi and throw it out for you, but really they are going to snaffle all the good ones and eat them.