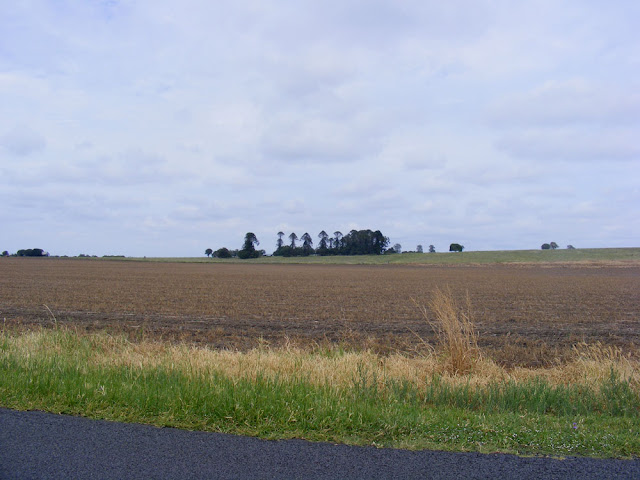 A homestead in the distance on the black soil plains of the Darling Downs. Surrounding the home is a stand of Bunya Pine Araucaria bidwilli. These relicts from the age of dinosaurs once had a wide distribution in eastern Queensland, but now only pockets of trees are left, most notably in Bunya National Park. A reserve was established as early as 1840 when it became clear they were disappearing rapidly.

They greatly resemble the Monkey Puzzle Tree A. araucana, which is native to Chile and Peru.  The genus Araucaria was around before the continents separated.

Bunya Pines have enormous (18kg) cones full of highly nutritious and tasty seeds. The trees will grow to 40 metres and live 500 years. They were tremendously important for the survival of local Aboriginal tribes and the gatherings to feast in the Bunya Mountains have become legend.

Do we know the reason why this tree was disappearing rapidly after having survived so many millenia. There was no pollution to speak of in the mid 1800.

Quite a contrast from yesterday's post. This scene reminds me of the of the northern plains in the US with its rich black earth.

Logging and land clearance for farming I assume.