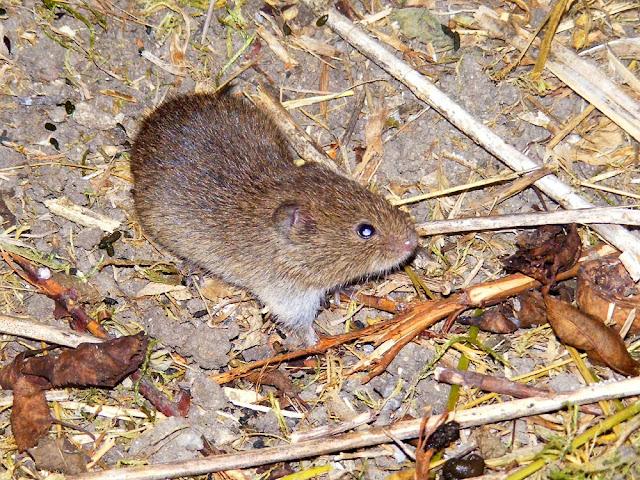 A vole, not sure what species (maybe Common) disturbed when I moved its shelter sheet of corrugated iron so Alex could mow. I also have several photos of where a shrew was.

With all the wet weather we've had over this year, the orchard didn't always get mowed regularly, and the potager is a complete weedfest. Added to that all the fenceline hedges were getting too tall and I desperately needed some new compost bins. Time call in the professionals. 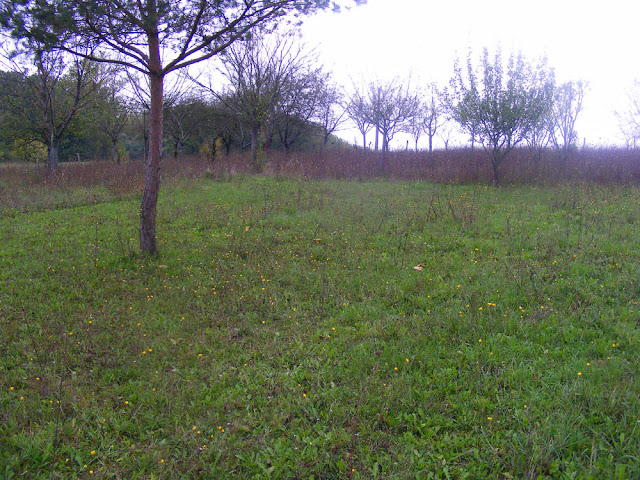 The section in the foreground hasn't been mowed since July, the rest even longer ago.

Our friends Nicole and Alex run a garden maintenance business as well as their gites, and we have used them for various projects in the past (most notably the coin d'apéro). 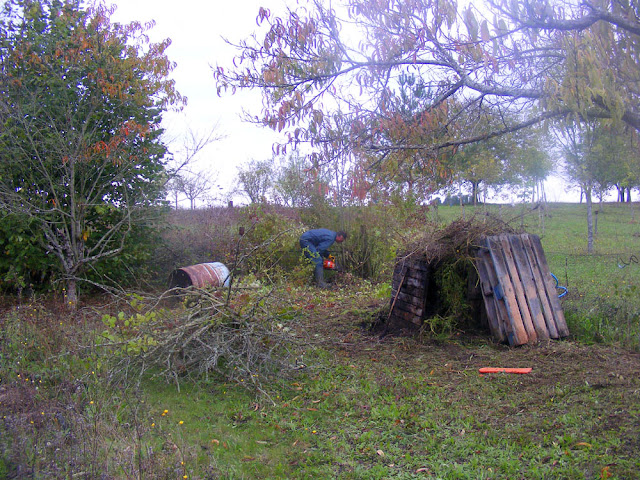 I called them up a couple of weeks ago and we met at the orchard to discuss the work. It was agreed they would come on 18 October and get as much done in a day as they could, for their standard daily rate of €240 + TVA. We all hoped it wouldn't pour with rain, but they assured me that if it was just damp with a few sprinkles they would work through it. Luck was with us, and although cloudy, the temperature got up to the low 20s and we had to shed a layer of clothing by lunchtime. (And it's rained pretty well non-stop the following days.) 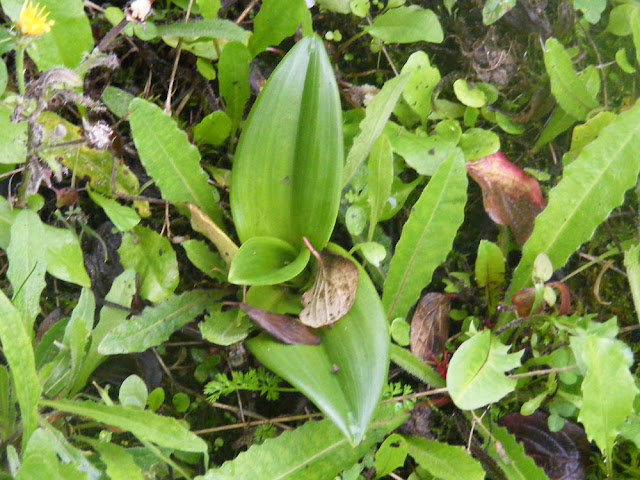 A new Lizard Orchid Himantoglossum hircinum leaf rosette. Last year this orchid had slim strappy leaves and didn't flower. These leaves are more mature looking, so it might flower in 2013.

I spent the day down there with them, and while they got on with trimming the hedges, cutting out a dead hazel to make way for some new compost bins, strimming and mowing the grass, I weeded the potager. In the interval between us discussing the work and the appointed day it had been warm and wet, then with a few cold days. The orchids had responded by all sending up leaf rosettes ready for next year. They look very healthy and robust, so I was very pleased. Fortunately they are mostly too low yet to be cut off by the big mower, although inevitably a few got run over. I'm sure they will recover. 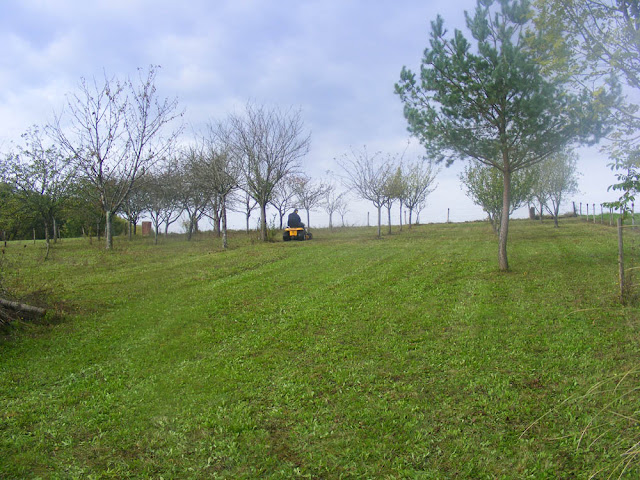 At the end of the day, you could certainly see where we'd been, but not in too severe a manicured sort of way, which is just how I wanted it. I picked some grapes, which remain in extremely good condition and are sweet and delicious. Some of them I passed on to Alex and Nicole just before they headed off to pick up youngest daughter Amélie from school.
Posted by Susan at 09:00

Poor little vole... it was on the loo... you should have knocked before lifting! That looks like the latrine area to me... those are very fresh looking droppings.
Cute though... only not when you've got veg growing... little b's have eaten all growing points out of the courgettes and the crooknecked squash... so no late pickings.
One thing is certain... it isn't a Bank Vole... nose too rounded, not red enough on the back and no grey line on the side... actually looks to me as though it is very pale underneath.

It may sound totally daft, but have you decided where to place your bonfire? If not, I would suggest you burn in the potager... you will sterilize an area of ground and feed it at the same time... then dig the ashes in. Do it as late next year as you can, else the potash will just wash through.

And the area you originally pile the rubbish on will be deprived of light and be much dryer... especially if you use thick black polythene underneath. So, you would be able to start planting earlier.

Tim: thanks for pointing out the latrine -- I hadn't spotted that. Anyway, if I'd knocked I wouldn't have got a photo! It's also definitely not a Short-tailed Vole -- ears aren't hairy enough. Like you I thought it has to be one of the species with a pale belly -- hence settling on Common -- bald ears, pale belly, medium length tail.

Do you not bag up your wood ash and put that on the potager?

C&E: Do you mean the ash from our stove? It gets put in a metal bin up here at the house, then when full taken down to the orchard and put on the compost. Am I wasting it? I could spread it on the empty beds in the winter I suppose, but until this moment hadn't thought of it (doh!?) A couple of professional gardeners I know have said it's really easy to overdo the ash -- most people produce too much for their garden. I've occasionally spread it on the back garden at the house, but it forms an impervious layer. It definitely needs to go somewhere it is dug in or is mixed with something else.

No, putting it on the empty beds in the winter will waste it.. hence doing it as late in the burning season as possible... it would be far better keeping the wood ash from the stove in a bigger bin up at the verger and putting it around the base of the fruit trees when they are flowering... or making up a solution of it for watering the flowering plants... don't forget, the potash makes the soil alkaline... and we are on alkaline soil anyway!
Also, only use a solution on the spuds... if you dig it in on the spud beds you will get scab for sure!!

Tim: OK -- the fruit trees sounds like the go for me. Thanks for the advice.

Just a thought... given this years weather... if it is not likely to rain soon after you've scattered the ashes... water! Else you'll 'burn' the grass.
Making a solution is not as difficult as it seems... even with your H2O difficulties... you need one of those huge rain collection tubs with a tap at the bottom... let it rain, add some ash... wait for another few days like the last 36hrs and you'll soon have some liquid feed... stir in a load of nettles as well and let them ferment down a bit... use the resultant liquor sparingly... it is better [and cheaper] than anything you can buy.

OH... and any charcoal left in the wood ash you do dig in will help keep the soil clean [that's why people used to use chimney sweeping soot on their allotment plots]...

Tim: does burning the grass matter? My thought was that it would be useful to create a bare patch.

For the liquid feed, if I use something with a tap at the bottom, won't it all just gunge up fairly quickly?