This is Part II of an account of an outing to the Foret de Loches by the Association de botanique et mycologie de Sainte-Maure-de-Touraine. Part I is here.

According to Jean-Pierre, we may be in for a very good fungi season. In the autumn following a hard winter or a prolonged period of dry, the mushrooms are often abundant. Since we have had both this year, perhaps we should expect to be overwhelmed by fungal fecundity! 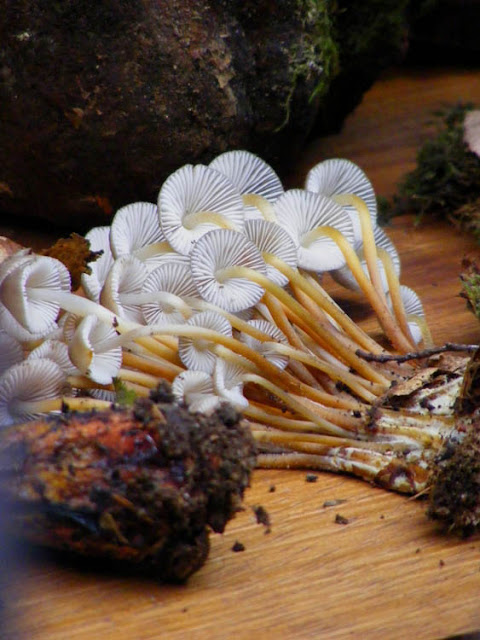 I didn't catch what these are called, but they were so pretty I've included them. 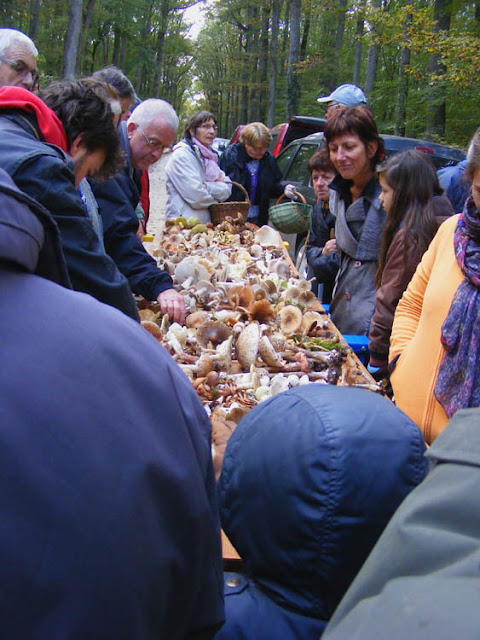 The final haul displayed, with the crowd of foragers contributing and admiring. 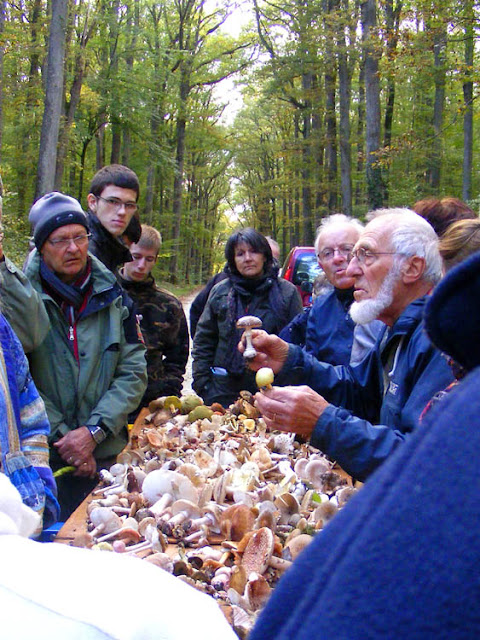 Jean Bouton talking to the group about two very poisonous species -- the Death Cap and the Panther Cap. He pointed out that you must check each and every mushroom as it comes out of your basket if you are intending to eat them. Many of the fatalities caused by the Death Cap have been because it is an unremarkable looking mushroom that gets bundled up with comestibles and accidentally eaten along with the edible ones. He also pointed out that many mushrooms accumulate substances like caesium and other hazardous materials, so even non-toxic species must be sourced from unpolluted sites. 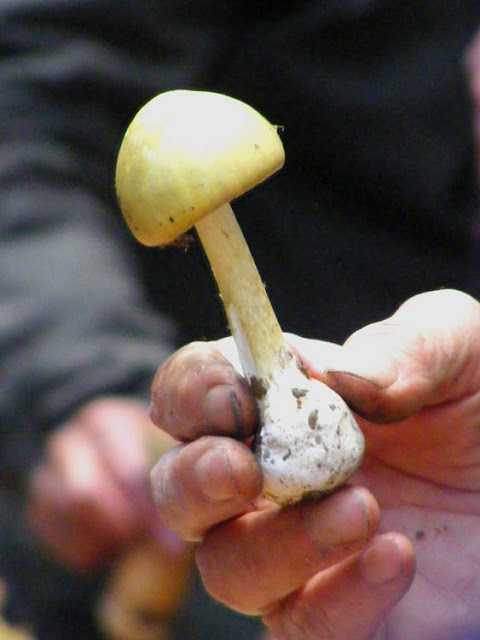 Death Cap Amanita phalloides -- eat a single one of these and you have about 3 hours after ingestion to get medical attention before permanent liver damage or death is inevitable according to Jean. They are the most poisonous mushrooms in the forest, and doubly dangerous because the symptoms of poisoning do not manifest themselves until long after it is too late (several days sometimes). In fact, you are not recommended to even touch them in case you subsequently touch your fingers to your lips and ingest a tiny amount of the poisons (yes, they contain more than one...) nor should you carry them in the same basket as mushrooms you intend to eat. Someone asked Jean about the fact that he openly handled this specimen, but unfortunately I didn't hear his response. These mushrooms are not uncommon, and are the reason that some foragers wear latex gloves. 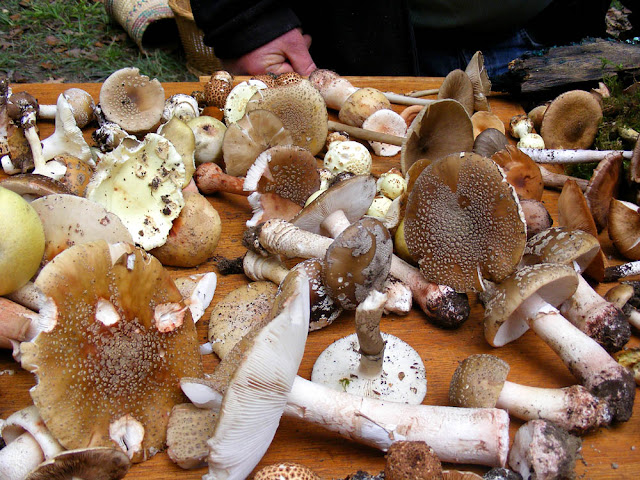 This is a mixture of Blushers A. rubescens and Panther Caps A. pantherina. Blushers are comestible, Panther Caps are one of the most toxic species. Can you tell the difference? I think I can, but I certainly wouldn't be putting my health or life on the line by eating any of these, just in case I was wrong. (Blushers get a pink blush on the stem and cap, especially if bruised or damaged, in case you are wondering what the difference is.) Blushers are very common, but Panther Caps are not uncommon here and they often grow in in proximity to one another. 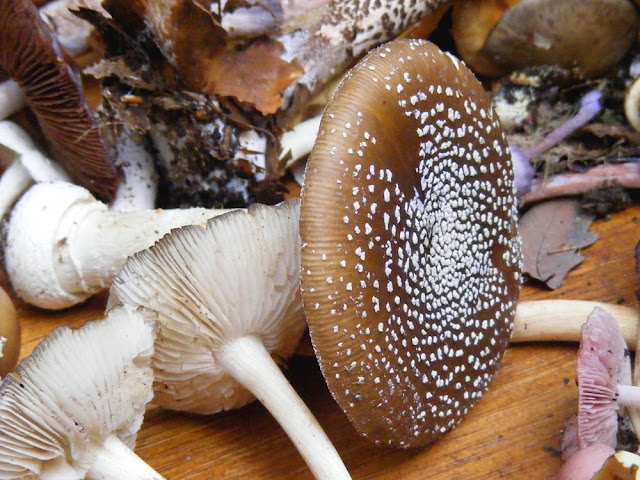 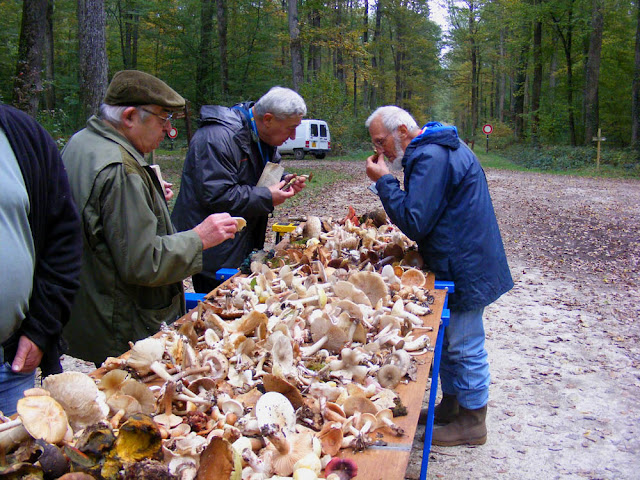 The Masters at work -- Paul, Jean-Pierre and Jean identifying fungi at the end of an afternoon of foraging.
Posted by Susan at 09:00

Email ThisBlogThis!Share to TwitterShare to FacebookShare to Pinterest
Labels: Events, Food and Drink, Loches and area, nature and wildlife

We will stick to supermarket mushrooms.... One bad ID and your DEAD... Its all toooooo risky.

Jean Bouton said that he was going to wash his hands before he left... so presumably he had soap, water and towel in his van. Please note though... a bottle of camping hygiene handwash, which is now sold everywhere and also used in hospitals to stop disease spread... WILL NOT REMOVE the toxins! It is only designed to kill skin bacteria... and you let it dry on your skin.
ONLY soap, water and a towel can remove the toxins.... and USE A NAIL BRUSH... there may easily be some residue under your nails!

The specimen in Jean's right hand is the worst one... pale brown cap! And it shows the volva remains very clearly! Best to avoid ALL white gilled mushrooms... except for easily identified species such as Shaggy Ink Cap and mature Parasol and Shaggy Parasol.

There are many others that don't have matching poisonous varieties... stick with the simply identified and shop bought ones... the latter are more expensive, but often cultivated! DO NOT buy mushrooms off vide-grenier stalls... you don't know the provenance or the care taken in harvesting them.

Latex gloves... all the children there really SHOULD HAVE BEEN ISSUED with them! Yes, they don't fit very well... but then... the damn things never do!!

I agree with Colin and Elizabeth -- market mushrooms are fine and sufficient. The others are not tasty enough to warrant taking the risk. People probably used to eat them because they didn't have much else, and when they got sick and died it was, well, just the way things were. People probably didn't even know what had made them so ill.

C&E and Ken: occasionally I've had a really impressively savoury cep dish, and they are fairly difficult to poison yourself with. Mostly though I agree with you, and I certainly wouldn't believe implicitly in an ID by a pharmacist. They are just using the field guides like everyone else.

I notice that the bush survival websites are all fairly anti-mushrooms, mainly because you expend more energy foraging than you gain from eating them, and there is always the risk of poisoning.

Tim: thanks for H&S clarification.

I was doubly lucky in learning about mushrooms.
First a friend was a mushroom enthusiast and took me out several times to show me what was what in different environments.
He showed me the difference between a Panther and what he called a false Panther....his technique was to break the stem and look for pink threads.

It was he I turned to on finding a new mushroom on old elm stumps...and he called a friend,retired, who cycled thirteen kilometres to come and identify it as a volvaire soyeux.

The local chemist was a mushroom fanatic...bring in a box of fungi and his other clients could put their suppositories where the sun did not shine.
He was a great teacher...and you had a little exam before you were allowed to leave with your booty.

He warned me about ink caps...fine on their own, potentially toxic if taken with alcohol.

What a lovely couple of posts...brought it all back to me!

Fly: These sorts of people are to be treasured!

I just hope the 3 experts who led the forage are training up some young 'uns. It would be shame if their hard won expertise was lost.

N&A: yes, Jean is mentoring Loic, a University of Tours student -- he clearly already is pretty good and very serious.

Brilliant photos. I need to find an expedition like this near me. I also find it tricky to find the difference between Panther caps and blushers.... hence why I photograph everything and leave it in the ground. I'm fine with field mushrooms and ceps though. Those I can work out!

LJ: I am very lucky to have such a good field naturalists club on my doorstep. A lot of the senior members are retired botany or ag science lecturers, and really know their stuff.

interesting experience to have a fellow with so much experience right there. I tend to just photograph them and leave them where they are.