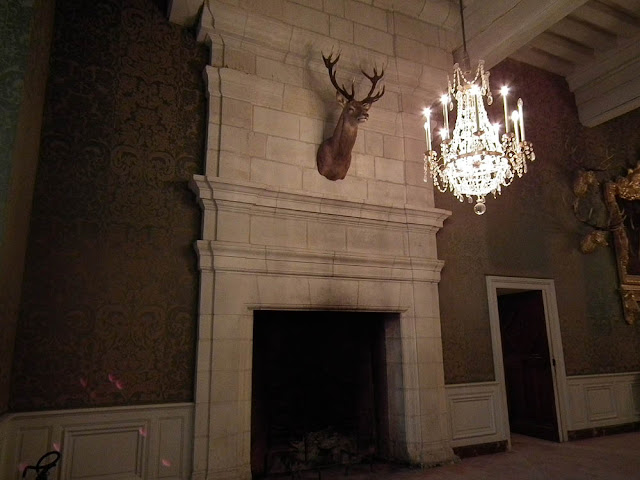 Most of the interior of Chambord is disappointingly 19th century, despite which this photo manages to convey a somewhat misleading impression of understated elegance. The reality is that nothing about Chambord is understated and very little there could be described as elegant -- the scale is too grand, too much about raw power and masculine fantasy.
Posted by Susan at 09:00

Susan, LOL! Too bad about that French Revolution thing, I guess...

Ken: Quite. It would be easier to bear at Chambord if the post revolution pretenders were interesting people, but they were all stupid and greedy.

It’s mostly the second part of the 19th century that was atrocious. No original idea. Everything was an “improved” copy of something else, especially in architecture and furniture. Even though the craftsmanship was excellent, it was still an “improved” copy. I can remember those dining room furniture so called Henri II. One was uglier than the next.

As was commented on Ken’s blog, Viollet-le-Duc rebuilt Pierrefonds. Also, he removed a genuine 14th century gallery on Notre-Dame façade to replace it by a faux 13th century one, or something like that. On the bright side, he saved Carcassonne.

Don’t start me on Haussmann...

When you think about all the wars there have been in France over the centuries, and all of humankind's ability to destroy, it's amazing that any of these old buildings are still standing at all. I'd rather appreciate them for what they are than spend time regretting that they've been modified.

Ken: Actually my point about Chambord was more about my personal disappointment that your experience is not a total immersion into Francois' world, rather than large sections of it being taken up by the Restoration monarchs. On a visit I would rather be thrilled by the life of a truly larger than life Renaissance king than scorn these self-agrandising mythologising fools in the 19thC.

Which is not to say I wish to ignore France's 19th century historical fact, but Chambord is such a potent symbol of Francois, and it is sadly watered down by too many 19thC rooms celebrating unworthy people. I can see why the curators have gone this way -- it is a part of the history of the building, and there are a lot more artefacts available to them to fill the rooms, and a lot more documentation.

My post simply presents my personal disappointment -- regret is too strong a word. But there are things to be aware of and one can comment on -- the curators at Chambord do it themselves in relation to the staircase, with a long explanation of how they conserved it and the damage the 19th restorers did, whilst similtaneously saving the place.

The 19thC gave us some wonderful pieces of built history, and in a good 19thC building I am very willing to immerse myself in their time.