Cat on a Roof 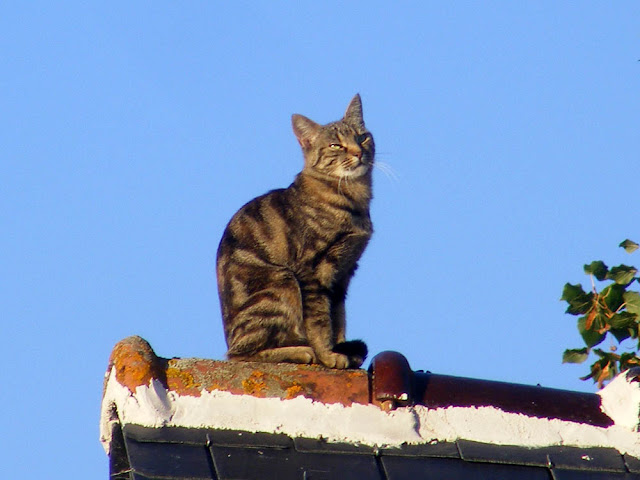 Our neighbours' garage roof is not tin, nor is it especially hot, but it undeniably has a cat on it. 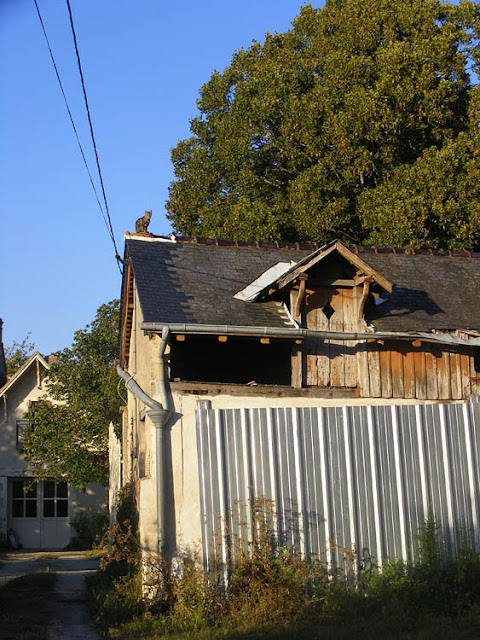 The cat in question is one of several that has moved in to our neighbourhood along with their owners this year, more than doubling the cat population in the houses surrounding us. 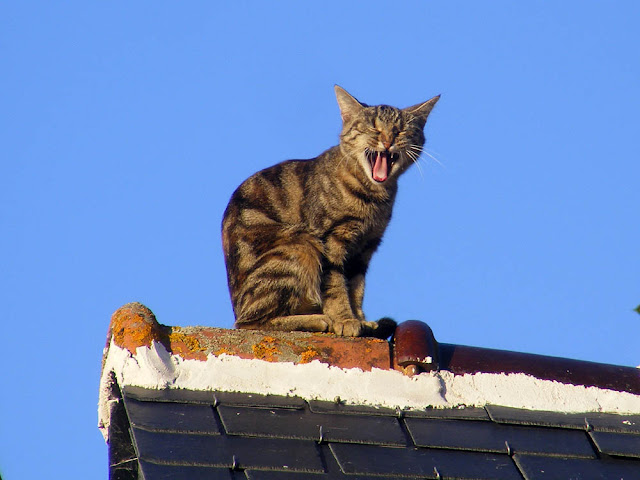 Individually, cats are charming creatures. I enjoy Pepsi's inspection tours and am entertained by Katinka's antics. 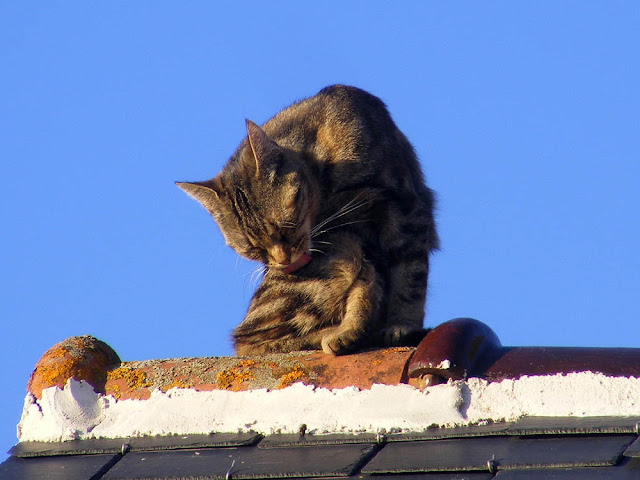 Sadly, as a species they are problematic. This is not their fault, it is our fault. We domesticated them, we've allowed their population to skyrocket to pest proportions. We have developed all sorts of sentimental attachments to them and anthropomorphised their behaviour, so that sensible methods of control are unthinkable. We don't get them neutered and we allow them to wander at will day and night. Inevitably, some of them end up feral. 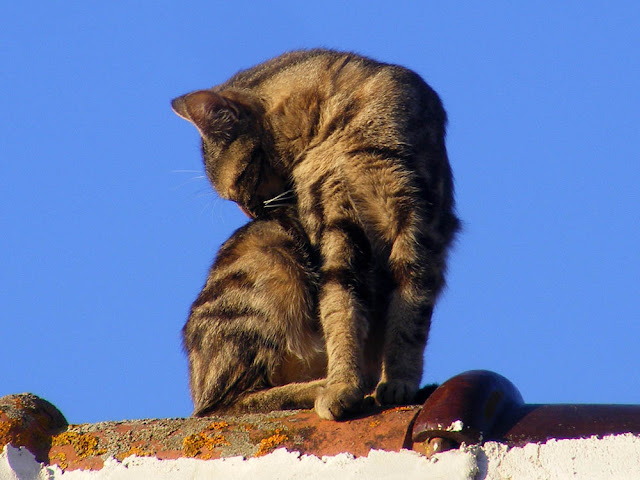 Despite the fact that we don't own a cat and I am not the most diligent housekeeper, we almost never get rodents inside the house. There is probably a connection between the number of cats in our neighbourhood and the unnaturally low numbers of a highly synanthropic (a wild animal that associates with man) species such as the House Mouse. I'm not saying I want mice in the house, but I know that it is unlikely the cats are just responsible for killing mice. They are small mammal specialists, so I find dead voles, shrews, rats and dormice in the garden from time to time. 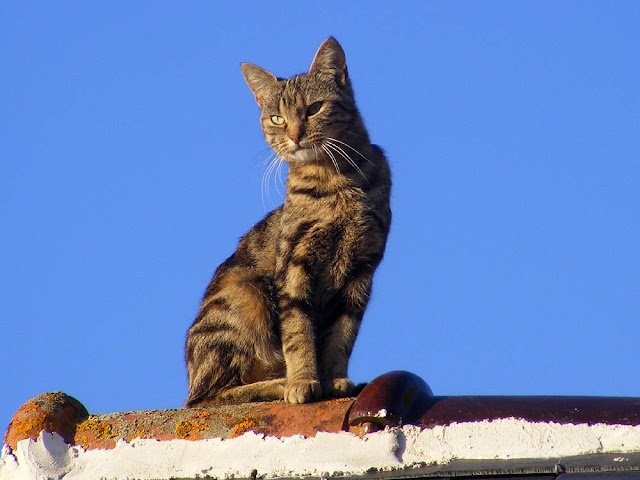 I also find lizards and snakes, which in all likelihood have been killed by cats. Wild reptiles are extinct in all European cities because of domestic cats.

Domestic cats are what conservation biologists refer to as 'subsidised exotic predators'. Their population density can reach more than 100 times that of native carnivores, and around 35% of households own a cat. There have been quite a few studies of domestic cat hunting behaviour, all of which show broadly similar results. Typically, domestic cats spend between 5 and 9 hours per day outside. About half of these cats hunt, and 70 - 90% of their target prey are small mammals. They frequent gardens and nearby land if it is relatively open (for example, pasture or the fringes of sparse woodland). Scientists monitoring hunting domestic cats observe that they hunt about 5 or 6 times more frequently than their owners estimate.They manage to capture prey on about a quarter of their attempts. Half of the prey escapes alive, so their total kill rate works out at around 13%, or about 2 kills a week. This kill rate is more than three times as high as owners estimate. Nevertheless, this is quite an inefficient kill rate, and domestic cats are only responsible for low prey numbers in quite small geographic areas. So long as the metapopulation of prey animals is healthy, and the population density of domestic cats not unusually high, they rarely threaten small mammal populations in Europe, where they have been established for centuries.

Feral cats, as Australia knows to its cost, are an entirely different matter. They are not 'subsidised' (ie not receiving supplementary feeding) and so are hunting for a living.
Posted by Susan at 09:00

RonRon, as you know, is too lazy to try and catch more than a Daddy-Longlegs or a moth... but Baron more than makes up for that... he averages three voles a day... mainly from the potager/verger area, which I am very happy with... less frequently from the meadow, where he tends to hunt along the edge of where I've mowed and only for a short while after mowing... he's only had three birds in the time he's been here... two of which survived 'unscathed' physically... Lord knows what went through the mind of redWren as it looked down Baron's throat.
There are a load of Stumpies around here [lizards without tails] but he doesn't try and kill and eat them.
I've seen him sitting looking at a frog... but making no attempt to catch or eat it.
RonRon will 'chase' some insects outside... grasshoppers mainly, where chase involves touching them with a paw to make them hop... and then plodding after them and doing it again. She was on the bench just outside the door this summer when a lizard walked straight across at the tips of her front paws... she made a great effort... and watched it ALL the way!

Perhaps you could organise a CAT HUNT... and get rid of a few or even a lot...

Too many semi-feral cats in one area can be heartbreaking to see. Too little food, too much inbreeding and disease play havoc with the population.

Our two do chase and catch things but 99% is mice or other field rodents. Of the two Shadow is by far the better at it. He can, and does supplement his diet. [Just as well as Tinka often scoffs his cat food!}

We've only had the very occasional bird fatality--mostly they are rescued by us.

Tim: I think you should stop subsidising the Aigronne Panther -- he clearly doesn't need it.

C&E: Won't work -- for a start, think about the potential (or lack of...) of your local hunters. Also, Australian feral cat control programmes have discovered that they are almost impossible to shoot and extra-ordinarily difficult to trap (and of course, you can't risk poisoning them).

N&A: Cats aren't designed to catch birds so they are crap at it.

I absolutely agree with you about semi-feral populations. The sort of situation you describe is an urban (or sometimes farmyard) phenomena. The cats are in plain view and could be managed much better -- supplementary feeding; trap, neuter and return programmes, for instance. Unfortunately such programmes are relatively expensive because they require manpower.

Still love the cat on the roof photo. We have two indoor cats. One of our neutered cats began spraying whenever the outdoor cats would come around the house -- since the neighbor feeds them. I finally had to let the spraying cat become an outdoor cat, but I put a bell around his neck in hopes of giving all the other critters a better change to avoid him. He stays on the front porch or in the backyard a lot and seems content if he can drive the outdoor cats away. I understand your sentiment though. That same neighbor who feeds the cats has a birdfeeder. It's like a salad bar for the cats.

Susan, you said "Tim, I think you should stop subsidising the Aigronne Panther -- he clearly doesn't need it."
Do you want to tell him that... somewhere around 6PM of an evening?
I'm certainly NOT going to try...

The clocks went back last night... they've been queueing at their "correct" time every meal today... we've had to turn the radio up just to hear it!!

Do cats occupy the same sort of ecological niche as urban foxes? Round my way, foxes can be seen quite often. It occurs to me that this is an area with far more apartment blocks than houses with gardens, and more of those apartments occupied by the sort of people who don't keep pets anyway, and I'm wondering now if there's some sort of correlation.

Auty: no, foxes are opportunistic scavengers and omnivores. They will hunt small mammals, but only if there isn't easier pickings. I doubt if urban foxes hunt much. Cats are strictly carnivorous and rarely scavenge.

Bertie the black cat brought us a mole the other day. Evidently, cats will hunt moles but won't eat them. He gave it to us as if it were a fine present. He also catches birds, lizards, and voles/mice occasionally. He is neutered so he won't be producing any offspring, and we feed him well. New neighbors here have brought two more cats into the hamlet. Oh well...

We have a couple of rather fat cats in a rural Victorian setting. Most of the time they catch mice - they eat everything except for the 'guts', but occasionally they will catch a small rabbit and eat - wait for it - just the ears. A feline delicacy I am sure.
We watch them sitting atop fence posts and imagine them doing a 'belly-flop' to catch their prey!