During the Great Freeze of 2012, back in February when I was keeping warm in front of the wood stove, one of the tasks I took the opportunity to deal with was shelling our walnut harvest. The walnuts had been sitting in a box in the pantry since the autumn as I was still using walnuts shelled and frozen from the previous year (and originally given to me by our neighbour Edouard, in an enormous net sack!).

I decided to make granola to use up the last of the 2010 walnuts in the freezer and walnut cream to use up the nuts that were left over after packaging up the 2011 nuts in a neat 150 g box for the freezer. (The 2011 harvest netted me about 200 g of nuts - a meagre quantity, due to the drought, but those nuts were good quality, with few rejects. But if I thought that was bad, this year I have no walnuts at all, and neither do any of my neighbours. I had to buy walnuts at the supermarket yesterday! Unheard of!)


It may not look very cheffy, but the tangy cream combined with the buttery cake is heavenly. 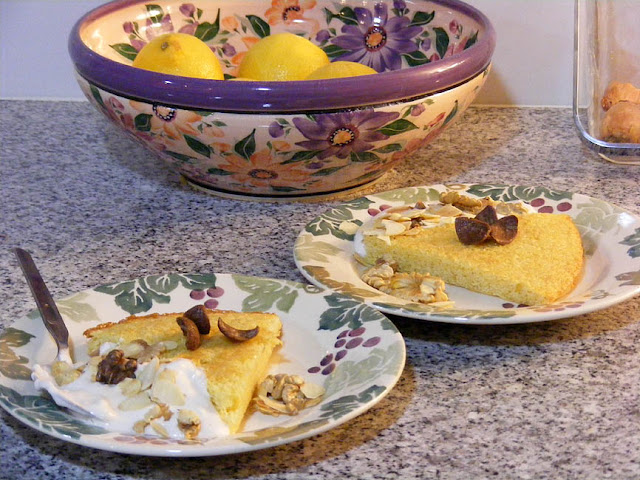 Walnut cream is super easy, and in my opinion, much nicer than creme chantilly. First, tip a box of cream cheese into a bowl and stir it until it is smooth and creamy. Add a dash of walnut liqueur (I used my homemade liqueur de noix, which at 3 years old is now extremely drinkable). You could also add some chopped walnuts at this stage, although I didn't. Then, in a second bowl, whip two egg whites until stiff. Add 3 tablespoons of sugar to the egg whites and then carefully blend the two mixtures together.

Earlier I had made a Victoria sponge disc by making a regular quantity of sponge batter but cooking it in a 30 cm tin, so it ends up about 1 - 2 cm high and can be used as the base for cream and fruit desserts. Rather than spread the walnut cream all over and decorate then cut into wedges I decided it would be easier to store if I kept everything separate and built the dessert individually as we wanted to eat it. Walnut cream is best eaten the day you make it, but it will keep in the fridge for a few days. We weren't expecting guests, so this was 4 days worth of desserts sorted.

A wedge of sponge went down on each plate, followed by a dollop of walnut cream, which was sprinkled with a mixture of toasted walnuts and almond flakes, with a few chocolate cornflakes. I stole the chocolate cornflake idea from Frédéric, who is the chef-owner of the Coté Cour in Azay-le-Rideau. The restaurant is just at the gates of the chateau and is easily the best rapport de qualité / prix in the town. We take clients there often, and Sandrine, Frédéric's wife, provides a warm front of house welcome. The chocolate cornflakes are ghastly as breakfast food, but make fun crunchy dessert decorations.

First I have ever heard of corn
flakes covered in chocolate.
Can't imagine the French of all
people eating them for breakfast.
But I guess they do like their
chocolate!

Seila - they ain't corn, they're wheat. Think a sort of coco-pop, but flattened out - like this.

Susan, I've been using that little bit of vin or liqueur de noix that you left here a while back as a flavor ingredient in cakes and cookies. You are right — it's delicious right now.

Chocolate Cornflakes made in cupcake cases were a favourite to make by children when I was little and my own children loved them too. Good quality ingredients are essential. Eat immediately before they go soggy! These days they seem to be called "Chocolate Petals".

Ken: glad you like it. I am rapidly running out, and no chance to make any new for the last couple of years.

Sweetpea: are they what French kids would call roses des sables?

Susan...
those curved things aren't chocolate cornflakes...
they are an expanded, reconstituted maize flour, chocolate flavoured, breakfast product...
the moment milk gets any where near them...
they go to MUSH!
Yuk!!
Dubble-YUK!!!

However, I have been known to munch my way through a bowl of them... dry!!
So as a topping, like you've used them, they are fine... I might even like them.
I still can't get my head round all [well, almost all] breakfast cereals being covered in "chocolate" in France...
a country of such refined tastes???

Tim: yes, the chocolate cornflakes are gross. I don't know why anyone would eat them as breakfast cereal. They go stale and even more disgusting quite quickly too.