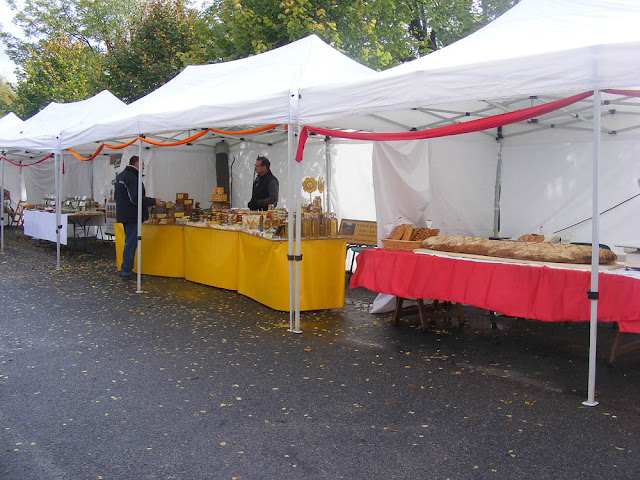 The lack of crowds is evident.

As predicted, the annual food and art festival in le Petit Pressigny, l'Art et Lard, was more or less a total washout. The weather ensured low visitor numbers, but there were fewer food stalls, and the art was noticeably less varied and attractive. I'm rarely very interested in works on canvas, and for some reason they seemed to dominate the festival. Worse, they seemed to me to be clones from the same art school, producing dark, ugly work (even when it wasn't dark and ugly in tone, there was a lot of deep blue and black in evidence). The one exception was Marie-Noelle Nisseron, who was displaying some quite charming portraits of families and friends interacting. 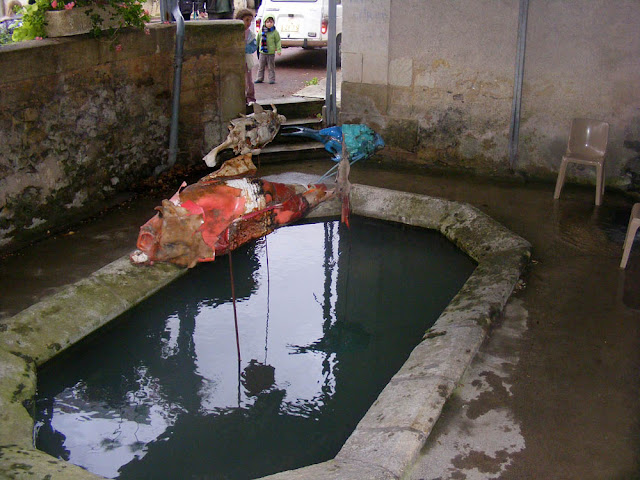 A sculpture by Putsch in the lavoir.

I'm much more interested in mixed media works, metal sculpture and ceramics. Luckily, there was a good blacksmith and a traditional zinc worker, as well as popular local potter Magali. She had some really beautiful pots in her trademark grey blue glazes, lovely shapes and there were at least half a dozen pieces I could happily have taken home. They aren't expensive either, but I didn't feel I could justify treating myself just at the moment. 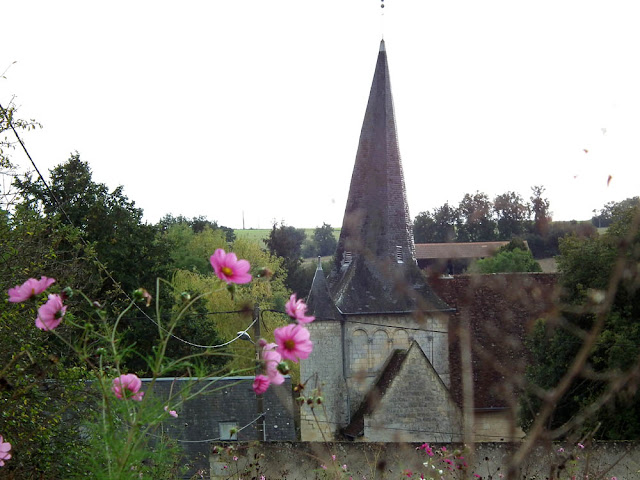 Check out the distortion on the steeple of the church in le Petit Pressigny.

I bought a couple of pieces of flan for dinner, a jar of forest honey from the Brenne, some freshly pressed apple juice and a net bag of freshly harvested walnuts in their shells from Huilerie Lépine. Madame Lépine warned me that they are not quite dry yet and advised me to spread them out in a basket for a while before storing. 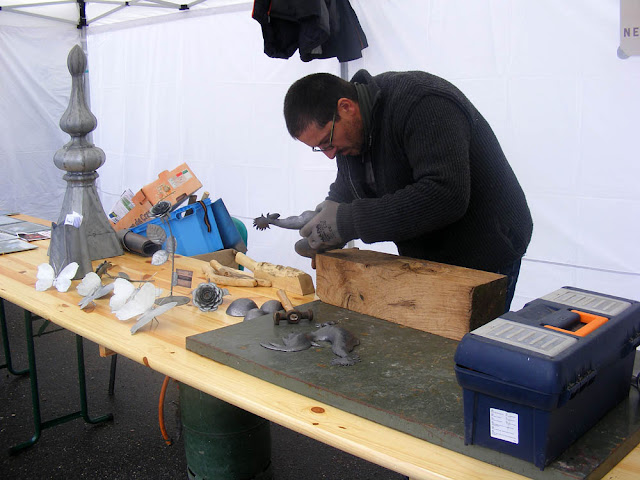 Pierre Gaillard of Girouettes Gaillard fashions a cock for a weather vane out of zinc.

There were very few people walking through town to look at the art, but of those who were there, a significant number were from the soi-disant expat community, and at least a dozen others were French locals that I knew, so I had quite a social time.
Posted by Susan at 09:00

So you don't like the 'daubs' either... did you visit the display of illuminations and calligraphy on parchment by Anne-Marie Guin-Brunet... superb work... the combination of both on an eel-skin parchment looked just like a medieval pennant.
And did you see the ephemeral art by the etang?

We were intending to come but the really horrible weather made us change out minds.

ermmm 'change our' I mean!

Ohh. What a shame. Is it really a year since we had a wander through the village, saw that sad and lovely homage to age and ate pizza by the sluice?

Tim: I only realised when I got home that we hadn't seen the illuminations -- damn.

N&A: We managed to catch the only reasonable window.

Liselle: Yep, but see you in a month or so, somewhere new and shiny :-)

About the steeple. Well, that happened after they became sister cities with Pisa, I guess.

Too bad the weather wasn’t cooperating. When you think of all the preparations and hopes involved for such a meager result. It’s a shame!

We were sorry to miss the event, but perhaps fortunate.

It's so close to home and I really wish I had an ounce of artistic talent. Were there any mosaics? We met someone in the summer who has renovated between LP-P and La Celle Guenand. We saw a exhibition in LR-P and I loved some of the pieces, although rather expensive the workmanship was fine.

Gaynor: there was someone called Gerda Jacobs with mosaics in natural stone. I felt they were rather inconsequential. She didn't have any larger pieces, and the small pieces were too small to have much impact, so it was difficult to judge her work.

I think her name was Gerda. Some of the pieces we saw and liked were large floor standing ones. I think she runs courses from her studio.