Conserving the Vault of the Chapelle de Tous les Saints

Recently I had the chance to go up on the scaffolding and watch wall paintings conservators Sabine de Freitas and Corinne Tual working on the painted wooden ceiling panels of the Chapelle de Tous les Saints. I happened to be passing the chapel, on my way to the bakers, and noticed they were there, so I asked permission to join them. Sabine, as always, was glad to talk about the work and be photographed. Corinne was less appreciative of me arriving and breaking her concentration, but put up with me with good grace. It was a dull overcast day and the two conservators were really struggling with the lack of light.

The panels were initially removed one by one and dusted thoroughly on both sides to remove years of accumulated grime, feathers and dead insects. When they were put back in place they were numbered from 1 to 90. Due to the restrictions placed on the restoration work by DRAC all of the deformations and misalignments that have occurred over time had to be kept. This meant that panels had to go back to exactly where they had come from and where panels were missing the carpenters had to individually craft each unique shape to fit the gap. 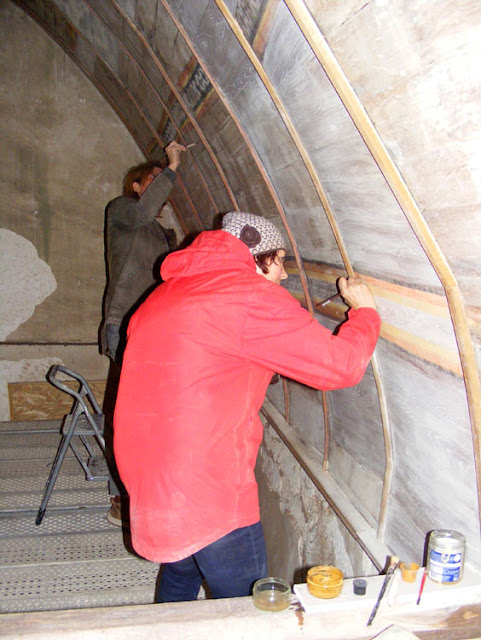 Once basic cleaning had been done and the panels back on the ceiling, temporary bands were attached to ensure the panels were not affected by the vibrations of the carpenters and roofers working on the beams, rafters and tiling above. The new oak panels have been treated with bicarbonate of soda so their colour blends in with the old as the tannins in the wood take time to migrate to the surface and darken. The originals would have been coated in limewash to protect the wood from moisture and Sabine has recreated this by mixing a bit of dust with limewash to tone down the whiteness and give a 'dusty' effect.

Sabine is utterly captivated by the chapel. The more she works on it the more she realises how special it is. She thinks it is significant that not only does it contain an important and unusual danse macabre, but that is combined with the dedication to All Saints. She feels that emphasises its function as a funerary chapel, although not everyone agrees with her analysis.


Corinne mixes up some paint. 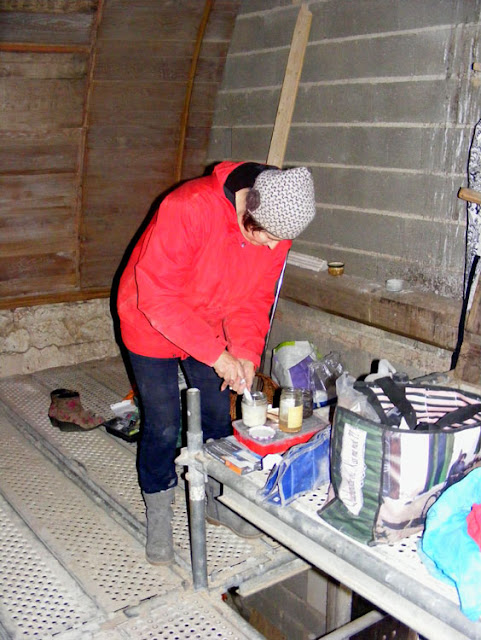 However, it is significant that her work has revealed that the chapel was clearly conceived as a whole and built and decorated as a single project sometime around 1500. The reason for her careful analysis is that in order to restore the paintings, she needs to first understand how they were made. Once she knew how the paint was applied and what the pigments were she was able to develop a conservation plan. She has demonstrated that the pigments on walls and vault are the same, and some of the decorative motifs are repeated on both. She has also discovered the residue of paint on some of the carved decorative interior stone, again from the same period, and has realised that the dancers are set in a frieze that is intended as an architectural trompe l'oeil. Once upon a time there must also have been beautiful stained glass windows which continued the theme.

It is very rare that such a complete and original artistic concept for a chapel survives. Usually the roof vault in this style of chapel decoration has been repaired and repainted, even if the wall paintings remain intact.


You can see how wonky the panelling is these days. 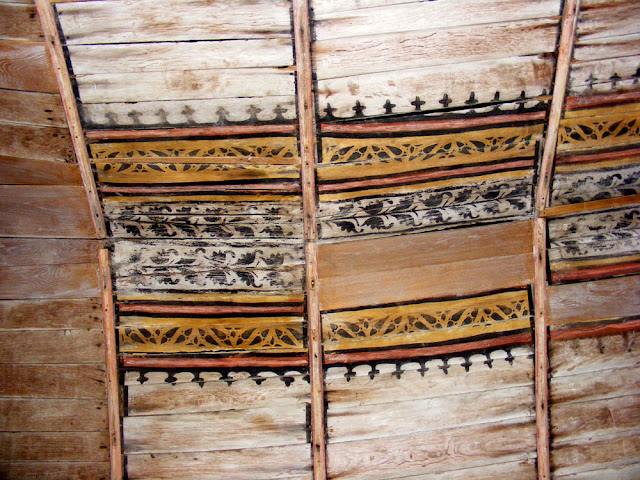 Sabine and Corinne's main work consisted of impregnating the painted sections with casein to stablise them. They were careful not to 'over-restore' the vault, as they did not want it making too much of a contrast with the as yet unrestored danse macabre wall paintings. When a decorative painted strip was interrupted due to damage they decided to sketch in a continuation of the red and yellow borders, but not reproduce the decorative pattern between these. It's all about being able to 'read' the design but still allowing the viewer to be clear about what is original and what is restoration.

Sabine very clearly sees her job as not just the technical aspect of wall paintings conservation. She is also a committed educator and communicator about her craft, dealing with architects, artisans and the public. At the onsite meeting on 16 June when benefactors were invited to view the work, she was the presenter who engaged the public the most and who they talked about the most admiringly afterwards.

The conservation work on the ceiling was scheduled to be finished at the end of June but I haven't had a chance to pop down yet to see if the scaffolding has gone and the conservators all packed up.

Previous posts about Sabine and the work to save the Chapelle de Tous les Saints:

Assessing the State of the Chapelle de Tous les Saints

Budget for the Restoration of the Chapelle de Tous les Saints (check out the picture of the ceiling before restoration).

And another building in the area that Sabine and Corinne have worked on:

I'm glad I finally was able to contribute to the restoration of this interesting chapel.