The Legendary Salamander, at Last

At last I've seen a Fire Salamander Salamandra salamandra (Fr. la Salamandre tachetée). I've wanted to see one of these most elusive of amphibians since we moved here ten years ago, but they just don't come out to pose for photographs all that often. The one in these photographs was spotted lumbering across a track in the Forest of La Guerche.

Fire Salamanders are the most widely distributed and easiest to identify of all the salamander species in Europe. None of the others are yellow and black. They can grow up to a length of about 20 cm, like this one, and have lustrous rather oily looking skin. They are not very agile and move ponderously. Since they exude a neurotoxin from their skin they have no fear of predators. They have two noses (that is -- two separate organs for smelling, not just two nostrils like the rest of us), but no vocal sacs (unlike frogs) and no ears. Like snakes, they moult and slough off their skin periodically. 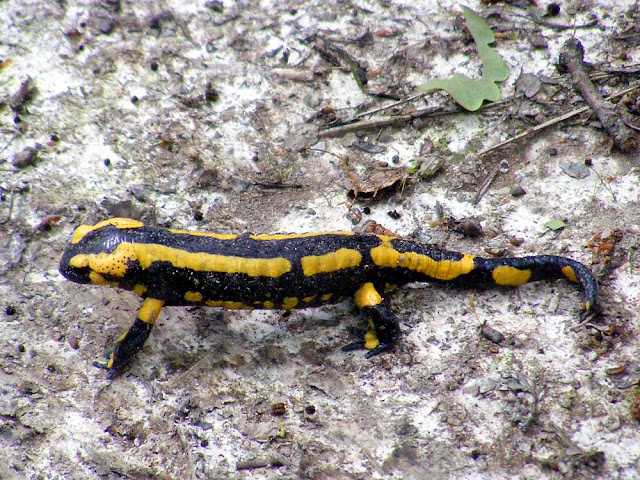 This salamander, like most in France, is the sub-species S. s. terrestris. It can be distinguished by bigger, more regular yellow blotches and its larger size. Individuals can be recognised by their unique yellow pattern.

Salamanders are nocturnal, which is why you don't see them all that often but if you are lucky you will find them in damp forests with plenty of surface rocks and fallen branches.  Most people, if they see a salamander at all, it is as roadkill. They seem to be attracted to wet warm road surfaces and as a result often get squashed, especially as their principle habitat of forests is increasingly fragmentised by roads, and because they are not exactly nippy when it comes to escaping danger. Salamanders may live in populations of a couple of hundred per hectare, but they are extraordinarily loyal to their couple of hundred square metres of territory and don't travel very far. Tant pis for them if it happens to be traversed by a road. In captivity they can live to fifty years old, and have been recorded at over thirty years old in the wild. 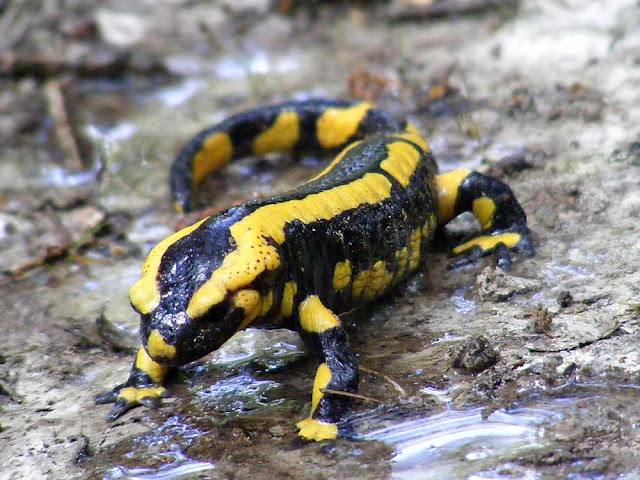 Although adult salamanders need to live in a damp environment, they can't swim. Female salamanders will park themselves at the very edge of a shallow spring in the forest and pop out eggs containing fully developed larvae. These will hatch immediately and flip themselves into the water where they spend their youth eating any animal smaller than them in the water. Unlike frogs, who lay thousands of eggs and produce thousands of tadpoles, salamanders limit themselves to about thirty hatchlings.

Over winter salamanders hibernate, usually descending underground into caves, and usually returning to the same place year after year. Adult salamanders spend their summers munching their way through small soft bodied creatures such as slugs and worms that they happen upon on the forest floor.

Of course, the reason for the salamander's fame in this area is because François I chose the little beast as his personal emblem, and had it carved all over the Loire Valley on his various residences. Likewise his court used the emblem on their residences to signify their closeness and loyalty to the King.

These days, salamander numbers are declining, partly due to their extreme sensitivity to insecticides (they aren't insects, but even low exposure to insecticides will kill them). The other significant risk to their numbers is the fragmentation of their habitat, often dissected by roads, and lacking corridors between pockets of suitable forest to allow movement of individuals.

This creature doesn't look real, almost as though it's made of plastic. You must have been thrilled with such a photo opportunity. I hear that salamanders are also threatened here in the States too because of all the factors you mention. Zoos are even building special exhibits recreating their natural environment in hopes of increasing the public's knowledge of them and their habitat in order to boost conversation.

Thrilled is exactly the word -- and it was so co-operative, just standing there for ages. Unlike the Garden Dormouse that lept out at us this morning and disappeared in a flash.