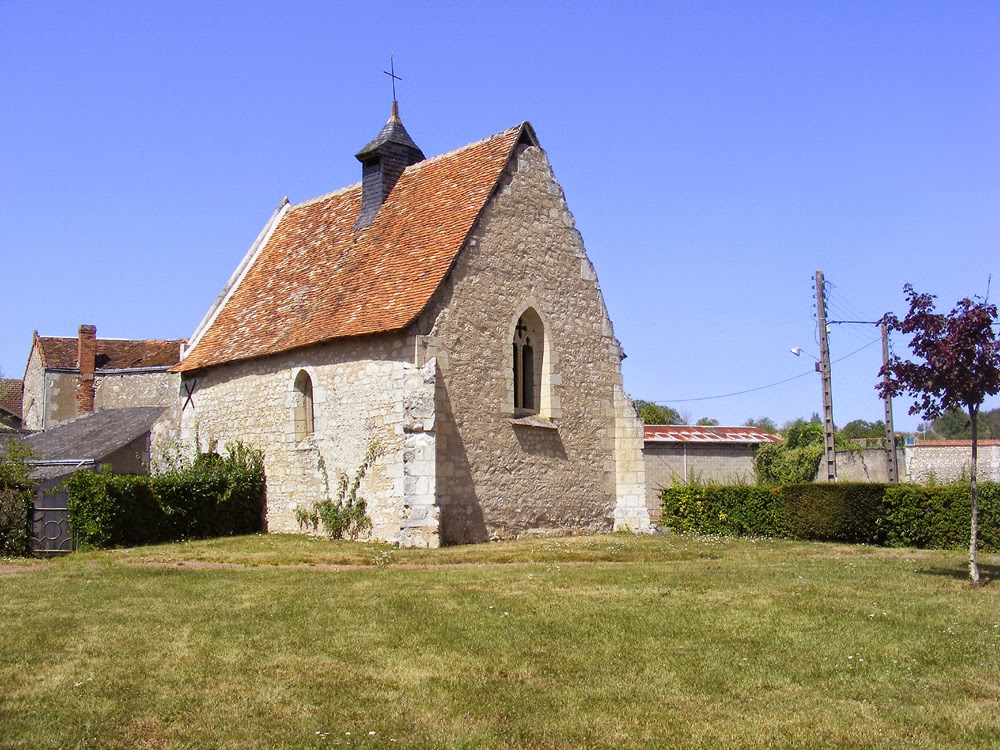 Regular readers will be aware that we are involved in a campaign to save the Chapelle de Tous les Saints in Preuilly, which has rare and important wall paintings. The Chapel dates from the early 16th century and is in very poor repair. It is owned by the town of Preuilly, who have passed over the responsibility for managing the restoration campaign to the local history society, known as the SAP. We have written about the chapel a number of times before:  La Danse Macabre; A Chapel at Risk; Assessing the State of the Chapelle de Tous les Saints.

On Monday 5 January I attended a meeting of the local council. It was a special meeting, open to the public, so that the architect engaged by the SAP could present his report on the condition of the Chapelle de Tous les saints and propose a programme of works and expenditure. Nine members of council, 3 observers including me and the architect Monsieur Barthel were present. The meeting was not minuted but most people attending took notes.


A video on the Chapel made by our friends Dominique and Dominique Robin.

He began by describing the building as 'a little jewel' with 'hidden treasures' and outlined a programme of works which would restore and maintain the building little by little. He reckons the programme could stretch to as much as 10 years, but might be done in five.

There are serious structural problems which must be addressed first. The three main elements of this are:
These three major problems have knock on effects, leading to further problems:
All of this work is to protect the building from water damage -- as he put it, 'giving the building a hat and coat'. Once that is done we can think about the following problems:

Doing all of the above will make the building more attractive, but also in the process protect it. Both will help when seeking funding grants.

Specifically, he suggests the programme of works should go like this:

His argument for restoring the interior before the exterior is that once the interior is finished we can start to show the building to people. The most difficult part of the interior will be the painted vault and he has taken the advice of the regional curator regarding this who has proposed a solution that I didn't entirely follow. It sounded like they suggested making a sort of sandwich of the wooden panels in situ rather than dismantling them, cleaning, repairing and reinstating.


You can clearly see that the roof does not sit on the gable squarely. 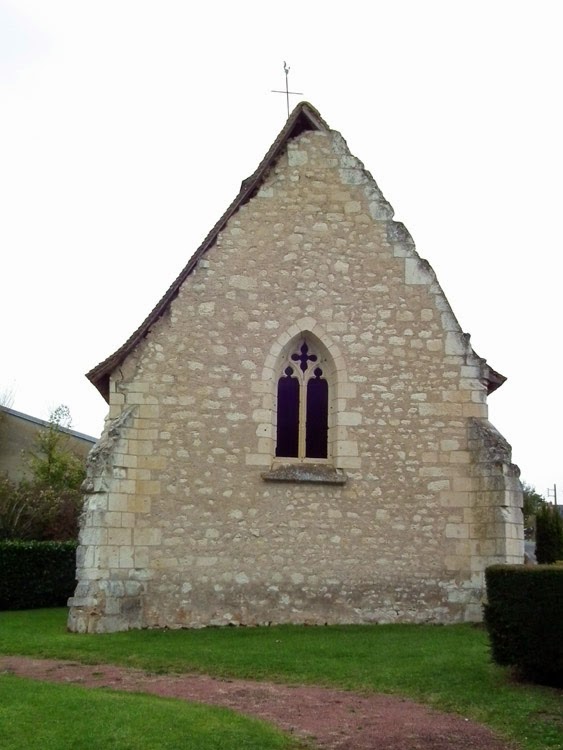 He suggested ways of using the building once restored, by thinking of it as an extension to the mediatheque across the road. It could act as a complementary space for educational activities and exhibitions. He had gone to the trouble to design a possible interior layout for displays which had visitors entering by the front door and exiting by the side door. He pointed out that one problem with the building is that it will need to be supervised when open. He also suggested making some small improvements to the park to make it more attractive.


The sloping top of the buttress is degraded and the gable is disintegrating. 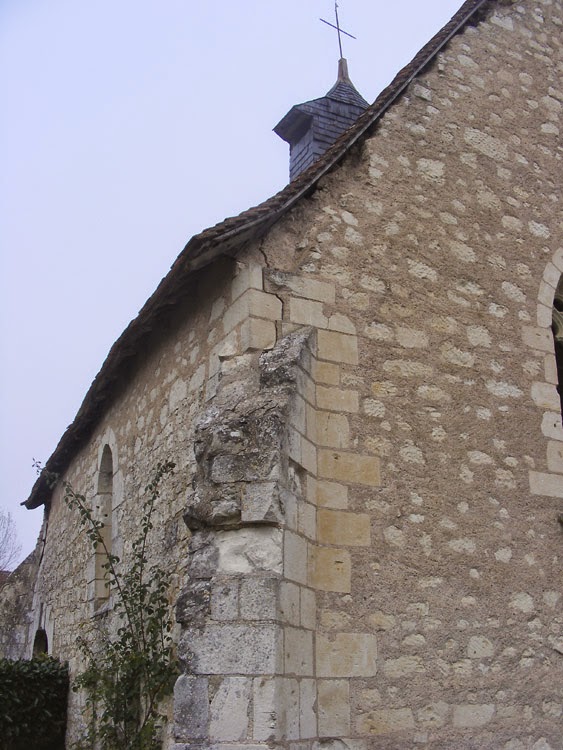 The big question is how to fund all of this. It is clearly way more than the commune can afford. The Société Archaeologique de Preuilly (SAP) needs to raise 5% of the project money and then apply for grants. Donations are about 60% tax deductible for French taxpayers, so roughly speaking, a donation of €100 has a real cost to the donor of €40. Grant giving organisations would be prepared to fund 20% of the project. One of the grant giving organisations, the Fondation de Patrimoine, can also help manage the fund raising. All grants are a function of the donations received, so the more we can raise ourselves the bigger the grant we would get.

DRAC would also be able to help, especially with the paintings, as would Sauvegarde de l'Art Français. What is needed is a definite programme with possibly conditional phases. It's a real juggling act to manage the fund raising, the grants and the work. It's important to have a dossier that one can present to potential donors and grant givers. Monsieur Barthel observed that in his experience when public aid is difficult to get, private aid goes up.


A detail of the Danse Macabre wall paintings. 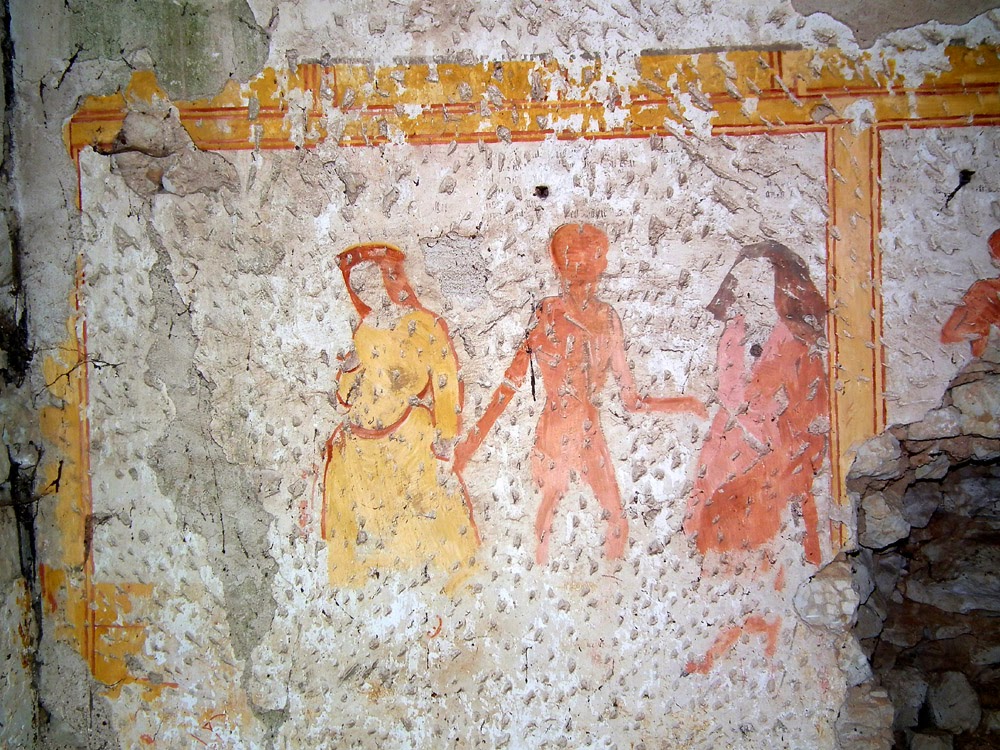 Once the meeting was opened to discussion one of the council members asked about the possibility of repairing the building bit by bit using volunteers or trainees. Monsieur Barthel responded that it would indeed be cheaper, but it makes the project longer and harder. The work has to be very well supervised and managed and you still have to have a qualified professional organisation to do that and to sign off the work.

Bernard de la Motte, president of the SAP has already raised €2300 and has pledges which will bring that to €4000. He feels that we need to focus on the rarity of the Danse macabre paintings to encourage funding. He reported that curators and architects from Batiment de France, the Fondation de Patrimoine, la Sauvegarde de l'Art Français, DRAC and the Conseil Général have all been to see the building and all are positive and supportive of the project.


The ugly cement blocks of the rebuilt western wall and the parlous state of the wonderful vaulted ceiling. 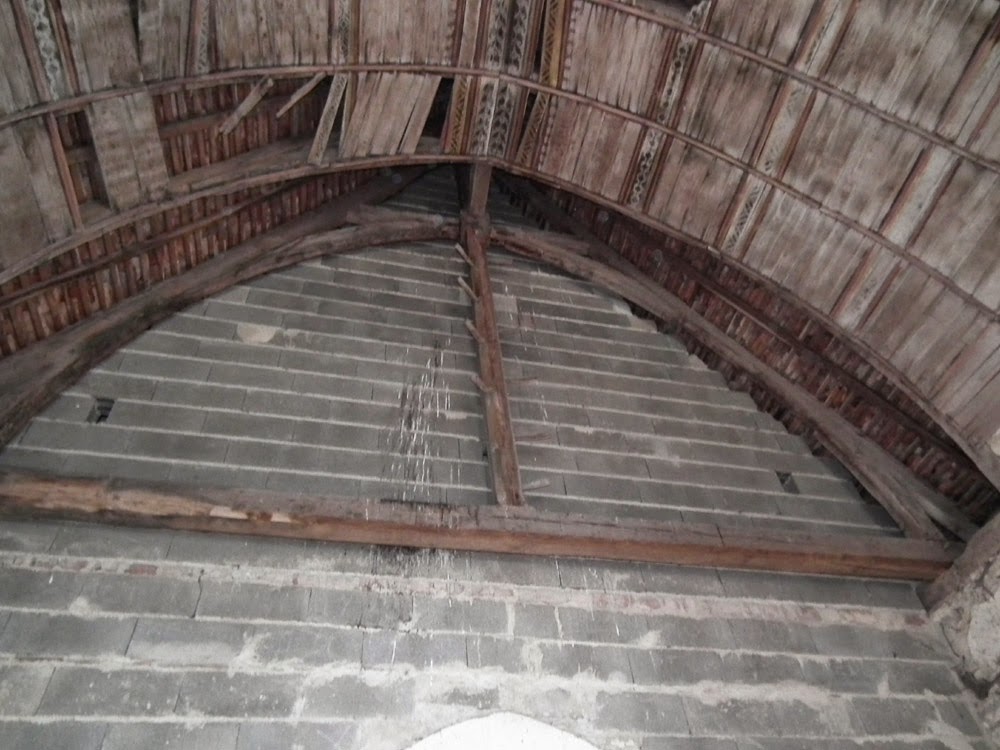 He wants to be able to present a dossier to the grant giving bodies as soon as possible, but asked if the meeting felt we should be asking for aid just for Phase 1 or for the entire project. The concensus was to go for the whole project. Some of the council members were visibly shocked by the amount on the bottom line and mentioned what you could get as new build for that amount of money. Others were of the opinion that if that's what it cost, that's what it cost to restore this important little building.

Anyone who wishes to pledge a donation to the project may do so by contacting us or Bernard de la Motte.


The chapel in the snow. 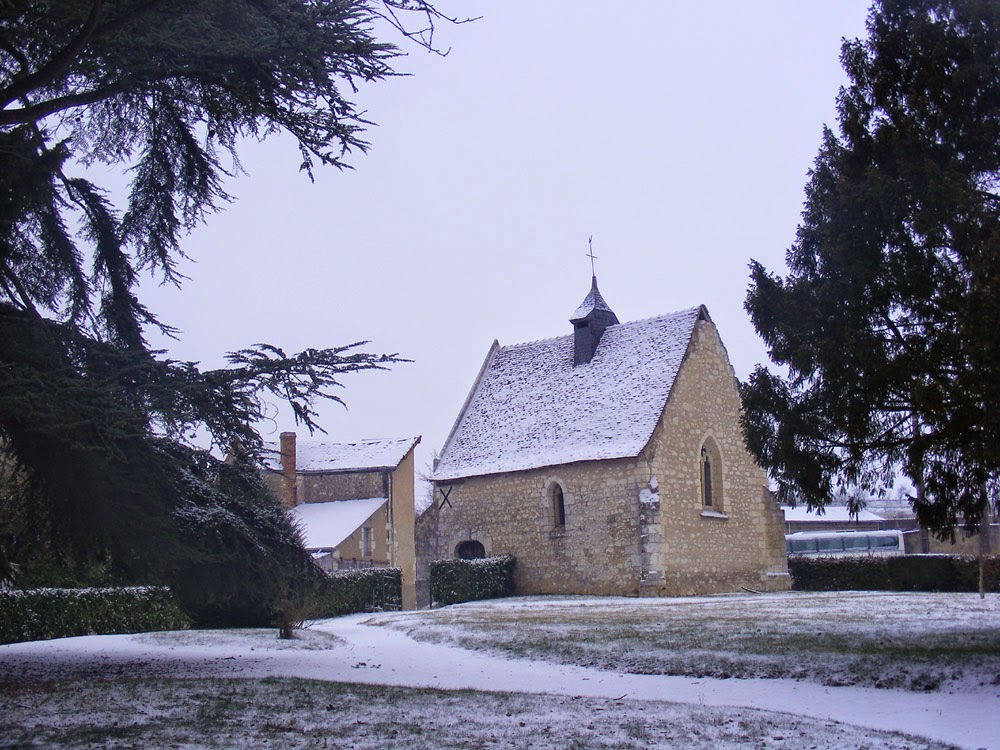 Soda Bread, dense on the inside and crunchy on the outside.

But, the thought just occured to me...
I don't suppose anyone mentioned one of those temporary "tents" as per a lot of renovation projects...
that would both protect the structure and the workers??

Tim: No, no one mentioned a temporary protective structure. My guess is that it wouldn't work out much cheaper and might cause the project to drag out even longer because people would be lulled into a false sense of security. On the other hand, it might offend everyone's aesthetic sensibilities and they would rush to fund the restoration in order to get rid of the ugly temporary structure :-)

The dog could easily be one which is allowed out to do its business on someone else's property. The curious thing is we are currently having the same problem up at the house all of a sudden too.

Funny quote from the blog post about soda bread:

"...if you’re in a pinch and in desperate need of bread, then Irish soda bread is your… loaf..."

Don't get me wrong — I like soda bread. I use a recipe given to me by an American woman whose father was Irish.

What does "flashed" mean in your sentence about turkey escalopes? We had those a couple of days ago, in a tomato sauce with capers, olives, onion, and garlic. Good good good.

Ken: As in flash fried. Put on a very hot griddle for a few seconds, turned, then doused with the lemon juice mix, turned again and taken off the heat for a few minutes. They turned out very well.

Susan, many thanks once again for your excellent blog post on the chapel, particularly for reporting in detail on the problems and defects identified and the proposed programme of works.

We think the video by the two Dominiques will be a great asset in raising consciousness.

Would that we had also been able to be present as observers.

John: I wrote the post with you in mind :-) It would have been good if you could have been there. You might have been able to make more sense of the business about the ceiling. It's the trickiest part of the building to deal with, even more so than the paintings.

This chapel is gorgeous, but the details of restoring it are dizzying! It would be a horrible shame to lose it though. Good luck with your struggle.

Betty: Thank you. I think it will take a lot of time and funds juggling but is achievable. Bernard dlM is invaluable as the person who will do the bulk of the paperwork required.

Appreciated the 'new build' comment...reminded me so much of when the commune where I last lived when in France decided to restore a chapel...total stupefaction on the part of some councillors.
What do you want to do that for when the football club needs modern showers..

I had no idea about the Chapel which looks incredibly interesting. If it is a question of safety,(i.e. unsafe for visitors) then perhaps it cannot be promoted at a Tourist Office? I'm sure people would travel afar if they knew about it! I for one would be willing to pay a fee or even make a donation. Perhaps at some point there could be a global internet request for donations? I am sure the society attempting to gain its restoration know the important bodies to generate support and assistance but finance is always of essence. There is always HOPE. The organisers of this Theatre rescued the building though the rescue story took years: http://www.tourisme-vienne.com/en/activite/978/theatre-blossac
If there ever is an opportunity to see it I would be delighted.
Thank you for such excellent, extensive coverage.

Fly: Indeed, I was pleasantly surprised that any of the council members were unequivocally supportive of the project.

RiF: I'll mention the theatre project to Bernard -- they may have useful insights. At the moment we can't generally let people into the building in case a piece of the ceiling falls on them. If you want to see inside let me know and I will arrange to get the key and take you there.