The latest issue of C'est en Touraine, the magazine of the Conseil Général d'Indre et Loire, has arrived in our letterbox and in it is an article about the dairy factory at Verneuil sur Indre. It contains all sorts of facts and figures so I thought I would inflict them upon our readers. 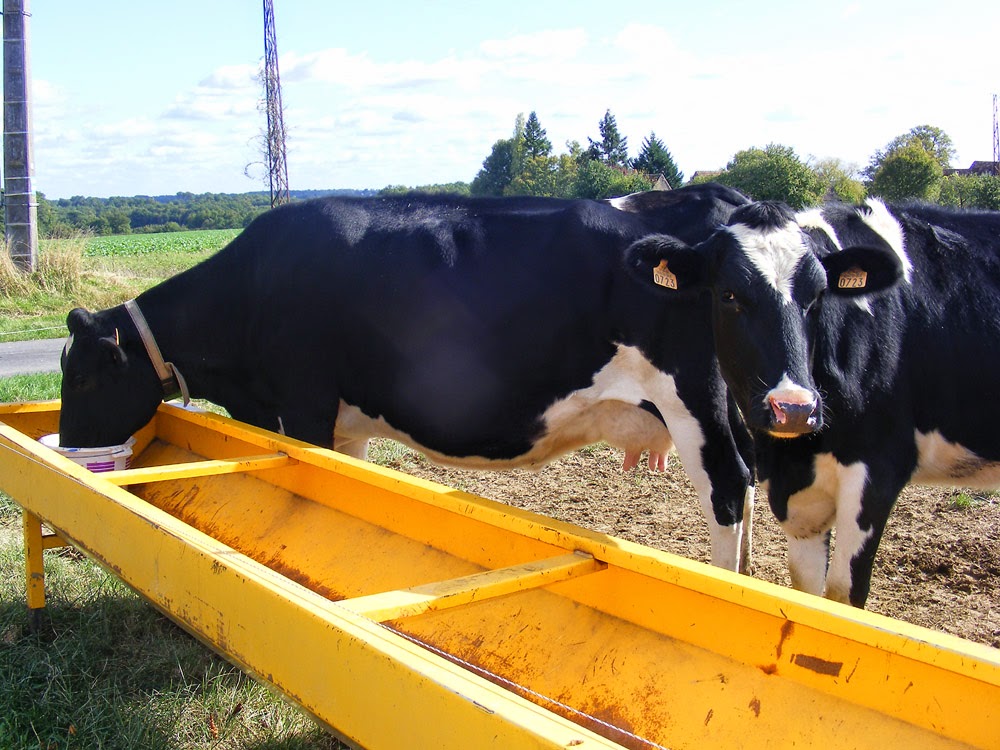 The co-operative dairy factory in the Loches area began production on 26 June 1910. In a little over a century the factory has adapted and evolved to cope with changes in agricultural politics and the globalisation of the marketplace. Working closely with 350 local dairy farmers the 130 employees of the factory process 250 to 300 tonnes of cow and goat milk every day. The raw milk is transformed into 4000 tonnes of milk powder, 800 tonnes of cheese, 2100 tonnes of butter, 100 tonnes of cream and 40 million litres of UHT milk (per year I assume -- the article isn't clear). Just recently, with the support of the Conseil Général, the factory has been extended by 2100 m² and the milk conditioning system modernised. (I assume the support from the Conseil Général was in the form of a grant to boost the local economy, but again, the article does not spell it out.)


Dairy goats (for illustrative purposes only -- I don't think this farm is in the co-operative supplying the factory). Photo courtesy of my Dad. 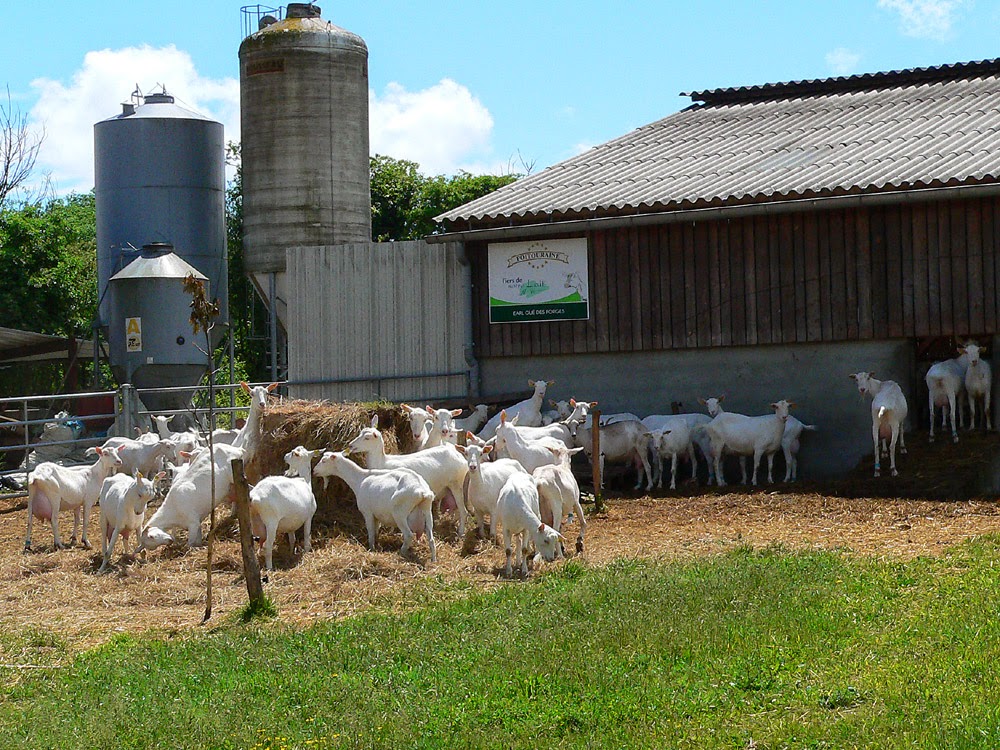 The factory now boasts a giant butter making machine, with a capacity for producing 800 kg batches of butter (2100 litres of cream yields one tonne of butter). Depending on who the butter is destined for it can be cut into 5, 10 or 25 kg blocks as an ingredient for other food manufacturers. They also produce 33 million 250 g blocks for the supermarket shelves. In the spring the butter is fruitier and easier to spread. In the winter it is drier and sought after by pastry chefs. They buy it up and stock their freezers.


Following the milk tanker, heading towards the factory. 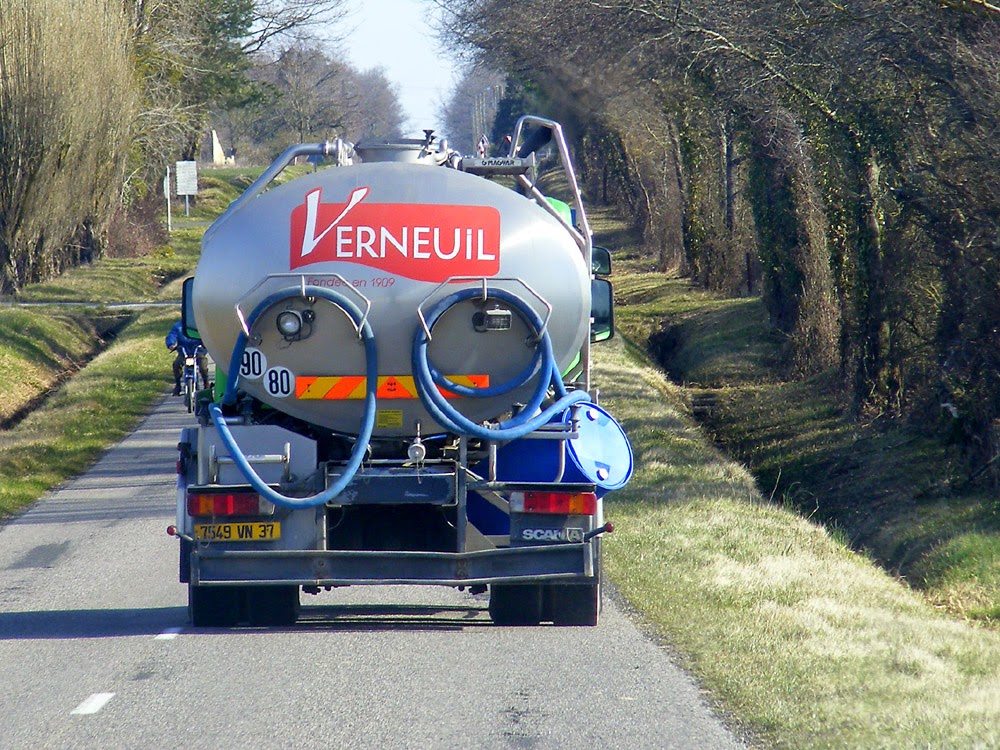 The milk collected the day before is skimmed and pasturised. The cream is taken off using a centrifugal separator and a lactic culture is added. It's allowed to mature for 18 hours in a special vat. The following morning it's pumped into the butter making machine in the next room. From 5 am to midday a team of 6 people make sure this traditional process goes off without a hitch. 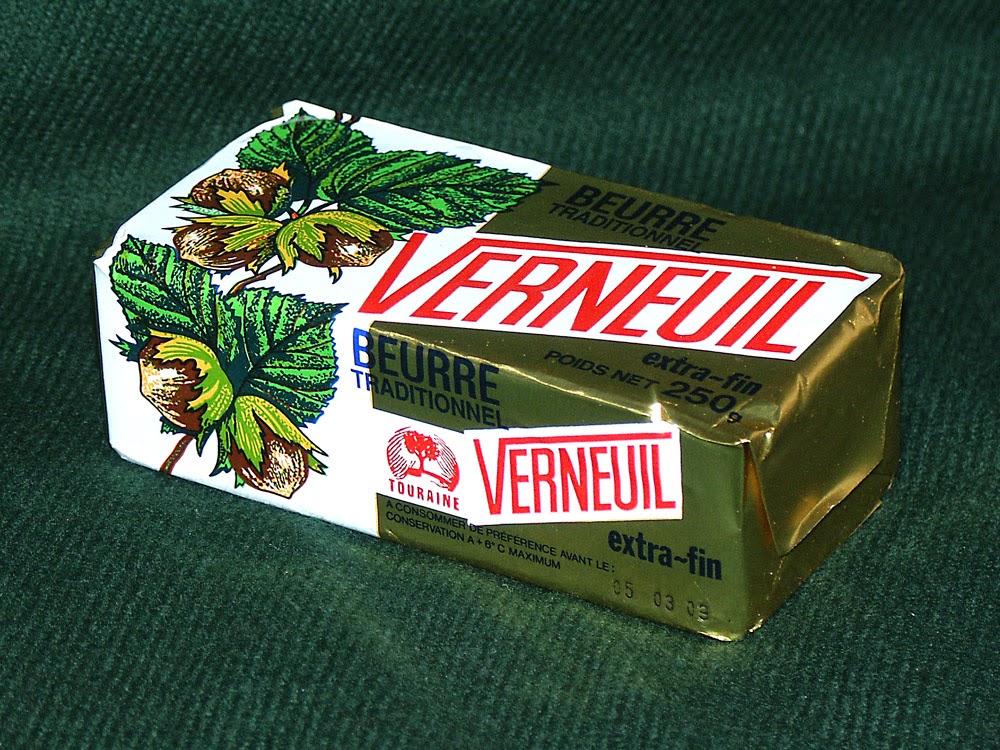 From 8 to 10 tonnes of butter comes out of the butter making machine daily. The fat content is compressed by a wormscrew then pushed towards the processing line. It is cut and boxed for the food professionals and each box is weighed manually.

The cutting and wrapping of 250 g blocks is done on another line in parallel. Between 50 and 60 tonnes of salted butter roll off the conveyor belt each year.

" In the spring the butter is fruitier and easier to spread. In the winter it is drier and sought after by pastry chefs."....
That is a useful little snippet!!
I'd never really thought about butter changing with the seasons...
but it is common sense really, in'it!

And don't forget that they are now making a Demi-sel butter for those of us who don't like it Doux...
and a previous article about the dairy pointed out that some 60% of the powdered milk goes to China.

Tim: Milk and butter especially change with the seasons and what the cows are eating. The taste changes and the keeping quality changes.In the winter milk and butter are stronger flavoured, but more likely to go rancid in summer. Both effects are due to forage, not storage. Occasionally the laitiere will apologise to me that the milk or butter tastes and says it's the pasture.

I didn't forget the 50-60 tonnes of demi-sel...They've made it for a while -- more or less ever since we've lived here I think. Our Vival always stocks it because they are from Brittany and also like salted butter.

I didn't know the bit about exporting to China, but it doesn't surprise. Apparently the Asian population is evolving at a remarkably rapid rate to have the gene which gives you lactase. Listed to a radio programme on the BBC World Service last night about it.

Feel the same about 'murdered' milk as I do about butter without salt salt. Toast just isn't toast when the butter is un-salted. We are forever treated to tea with semi-chalk water by our children who think nothing of using fat plentifully in routine cookery.

As a farmer's son I should have known about the seasonal variations in taste. When we had a local dairy we used to see the difference in winter/summer milk in bottles by the position of the cream line.

As to regional support for local processors and farmers, what a contrast with the UK! Our dairy farmers are a dying breed in more ways than one.

I'd better stop the rant coming on.

Reading this very interesting post, I feel my cholesterol going up alarmingly! Thank you all the same.

John: Unfortunately supermarket milk, whatever the fat content, is one of the most processed foods you can buy. Milk is routinely split into its constituent parts and put back together to create a standard product.

It will be interesting to see what happens now the milk quota system is ending. Unfortunately, the most likely result is that dairies will supersize or die. I think our laitiere will be more and more thankful for her local delivery round, and the Verneuil co-op is probably big enough to survive.

chm: don't worry. There's good recent studies to show butter and whole milk is better for you than the messed around with alternatives.

That sounds like quite a going concern -- I hope it will carry on.

Despite your comment at the beginning, I found this quite interesting!

Betty: I think the Verneuil co-op will survive too. I worry more about the individual dairy farmers. The price they are currently paid barely covers costs. Once it's a free for all a lot will go under and some will become enormous -- neither of which is desirable from an environmental point of view.

I'm glad you found it interesting. I thought it might be a bit stats heavy for a lot of readers.

It's another subject, but I noticed the same phenomenon with coffee. Back then, you couldn't easily find ground coffee in France. You had to buy beans and grind them yourself. In America at the same time it was difficult to find coffee beans — all the coffee was sold already ground. Now it's just the opposite: in France it's not always easy to find whole coffee beans, and in many parts of America nobody would dream of buying pre-ground coffee.

Sometimes it all makes my head spin.

Ken: LOL. Even today in France I think that salted butter is very much associated with the north west and it's mainly us Anglos buying it in the Touraine (and the odd displaced Breton...).

If the EU signs this free trade agreement with the US then I think we can expect to turn into Mexico here in terms of what's in the supermarkets -- regional differences will be swept away because they will be in a sense illegal (or at least prohibitively difficult to maintain).

The stats were interesting, thank you...and with a bit of luck the co op has the wherewithall to survive.

My grandparents farmed, so I was well aware of the difference between summer and winter milk - and cheese too.

Here in France an old friend liked her Swiss cheese...but only that made from the spring milk and God help her supplier should it prove not to be so.

If the EU goes into this vile trade treaty it will be an act of betrayal of local producers...not that that will worry the buggers in Brussels.

Fly: I don't understand what Brussels thinks Europe will gain. It is so clearly prejudicial to the European economy, especially on the smallscale local.

Salted butter seems to be a standard item now in our Saint-Aignan supermarkets.

Ken: No, Mexico has a 'free trade' agreement with the US and the result has been the flooding of Mexican supermarkets with cheap processed American food to the detriment of locally grown fresh food. One of the things under threat if the agreement goes through here is geographical certification such as IGP and AOC.

So I suppose the same is true of Canada.

Ken: Yes. Canada has learned to its cost that it cannot protect its homegrown industries because of the not so fine print in the 'free trade' agreement.

Well, what I hope is that more Mexican food might come to France. And Canadian ptoducts. Protectionism has never really worked -- unfortunately. I don't really understand why the American model is so irresistible. But I look at the dairy "factory" (you said) and I see an industrialization of food processing on that same model. On n'arrête pas le progrès.

Ken: The factory at Verneuil is indeed a factory, but it's a co-operative, not a multinational corporation operating under the terms of a supposedly 'free' trade agreement with America (actually a devilishly cunning form of protectionism in its own right). The issue is not more Mexican or Canadian products in France -- at this point there is no reason not to welcome such a thing. Google 'corporations suing governments'. You'll find articles in the NYT, Guardian and many others.