The Loire sands at Berthenay are a treasure trove of botanical interest. Here are some photos from an outing I went on with the Association de Botanique et de mycologie de Sainte Maure de Touraine in September last year.


Algae growing on a damp patch. 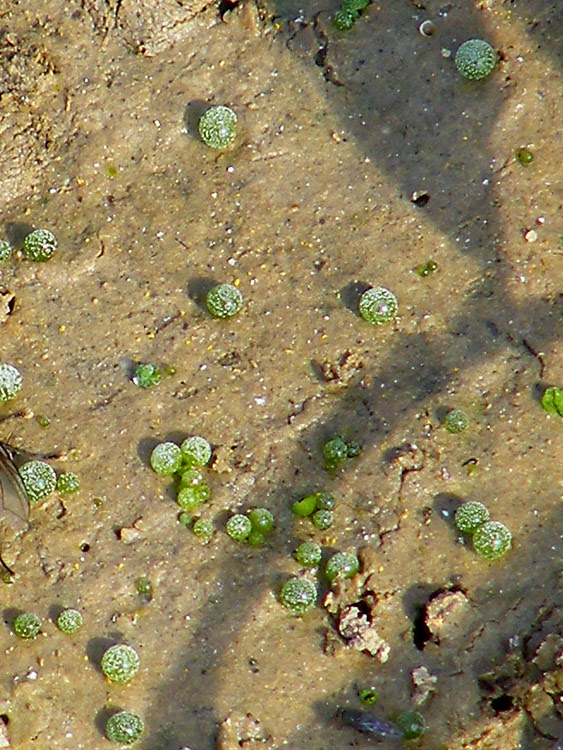 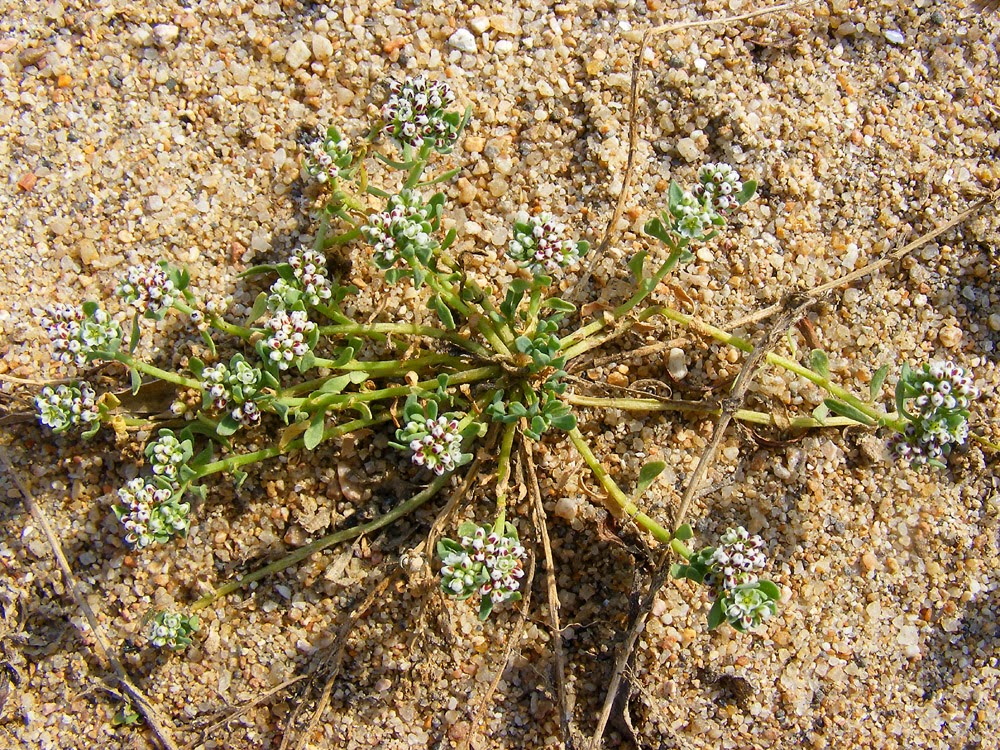 Dodder Cuscuta epithymum, a parasitic plant which attacks, amongst others, members of the Solanaceae Potato/Tomato family. Here it is entwining itself around and inserting its probes into a plant on the river sands. It was targetting Thorn-apple Datura stromonium particularly, which is an introduced solanum originally native to the Americas, but which has now found its way all over the world. My friend Paul tells me that during the Second World War, when tobacco was rationed, his father and others who were heavy smokers resorted to smoking Datura. He doesn't know if his father experienced any of the well publicised psychoactive effects of imbibing Datura.
Update: see the comments below for a discussion of the identity of the two plants in this photo. 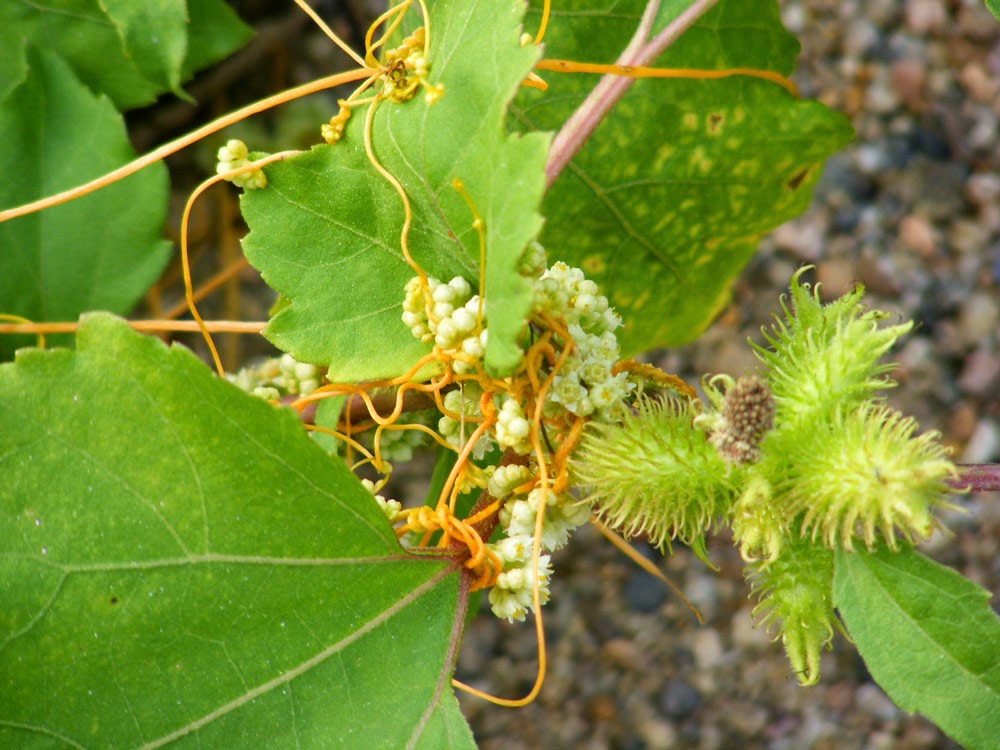 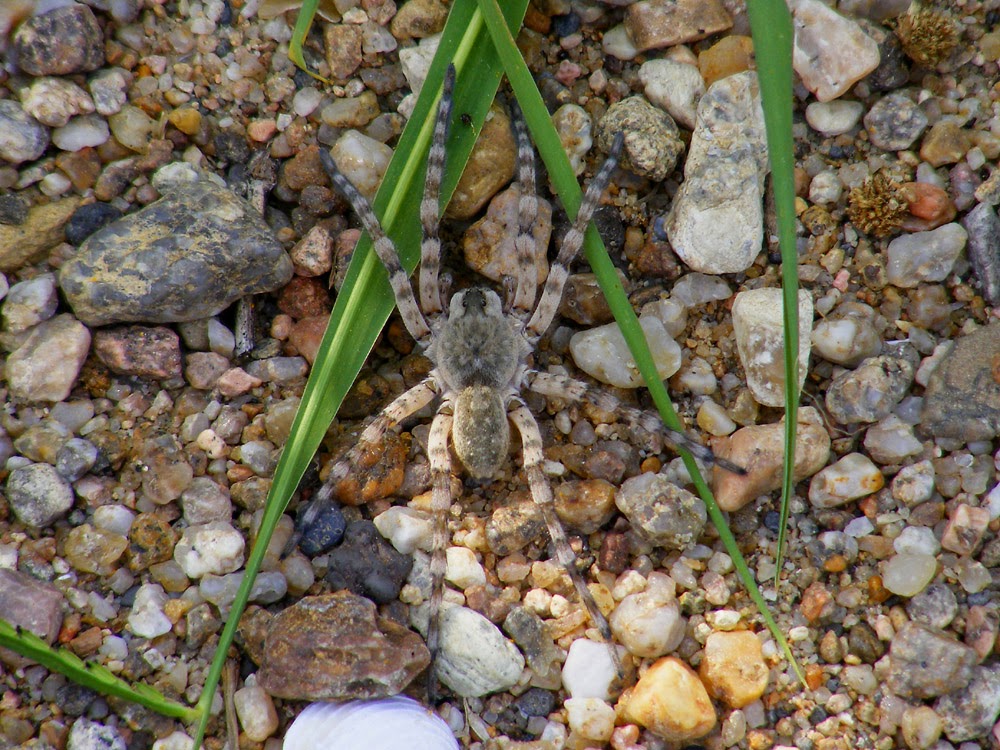 Chufa Sedge Cyperus esculentus (Fr. Cypère dorée).
It is a close relative of papyrus and can be used to make paper in the same way apparently. Its tubers are eaten in Spain and Africa and may have potential as a biofuel, but in most places it is considered an invasive weed. 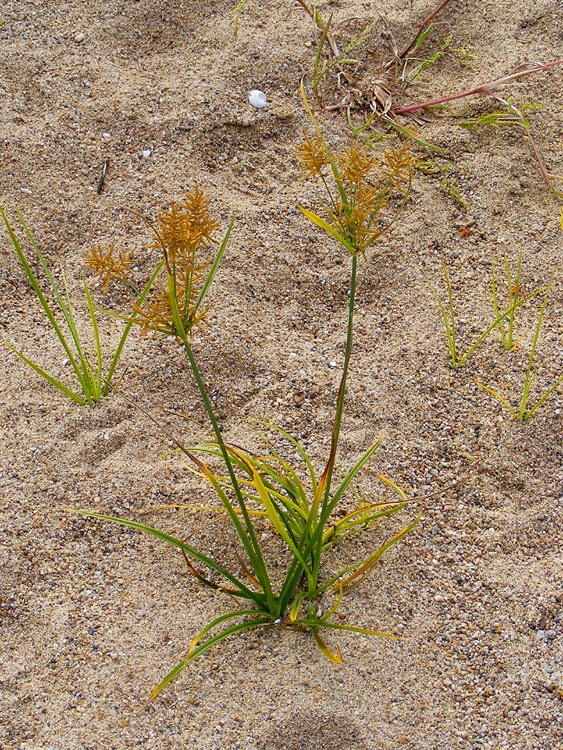 An unusual entrance to an attic in Berthenay, next to a small open courtyard with a covered well. 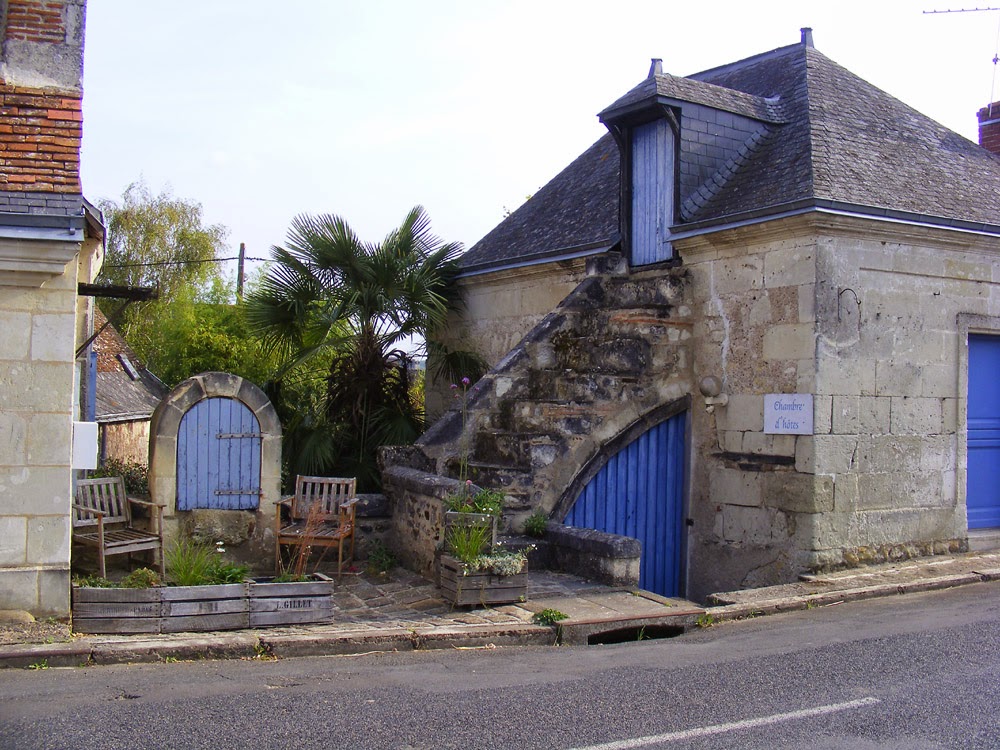 On Charlie Hebdo: A letter to my British friends by Olivier Tonneau, an openly leftist writer and university lecturer. The article is long but extremely well articulated and talks about the history of Muslim immigration to France as well as recent events.

Understanding Charlie Hebdo Cartoons is a website where readers can submit a Charlie Hebdo cartoon and one of the site writers will analyse it. It's measured and highly informative with lots of little snippets on events in the past which Anglos may not be aware of. If you are one of those who think the cartoons are frequently racist, this may convince you otherwise. If you don't get the jokes this is the site for you. They don't claim the cartoons aren't crass though, so be warned.

Lovely pix...
that ain't algae in the first pic...
it is proto-Death Stars...
I've only ever seen these in illustrations.
If I'm right, it is Microcystis sp.... an allegedly common, but very confusing blue-green algae of ponds... can grow to 2cm across.

And great Dodder find...
I've only ever seen it on heather where the stems take on a very pink colour... and the flowers have a pink tinge.
Given its lifehabit, I presume the base colours depend on the nutrition!

Tim: Thanks for the possible algae ID.

I only ever saw dodder on heather in the UK and you are right -- it is a sort of rusty orange pink. I first saw it in Cornwall when we came on holiday before we moved to the UK I believe. The literature says solanum is one of its preferred targets, so finding it on Datura isn't too much of a surprise. I've seen it on several different types of plants here. Perhaps it reflects the narrowness of the gene pool in habitat fringe Britain? It doesn't seem to be different species, but it might be a different ecotype.

And that isn't Thorn-apple it is on...
that plant is too hairy and the fruit are clustered...
Thorn-apple has deeply cut, smooth, shiny leaves and is darker green overall...
and the fruits are NOT in clusters like this but occur, like chillies, one per flower at a leaf junction...
and the spikes on the fruit are all wrong, too.
These are too soft and hairy...
right from little fruit, the thorn-apple has SPIKES...
smooth, shiny spikes...
that grow out with the maturing pod.
What is annoying me at the moment is...
I know this plant!!

And I think, having found it whilst looking for this plant....
that your Dodder might in fact be C. europaea... the Greater Dodder... feeds on large,coarse plants.

I've found the plant...
Italian Cockleburr [Xanthium italicum]...
the two terminal spines fit perfectly!
And it is regarded as an invasive in....
AUSTRALIA!!

Tim: Thank you!! The identity of the plant has been driving me crazy! I knew I knew it but couldn't find it in the field guides. I knew it wasn't Datura, but none of my photos of the dodder on Datura were good enough to publish (frustratingly, since I took at least a dozen). I deliberately weasel worded the caption so I don't say the plant in the photo is Datura but get out of saying what it is! Of course, I could have sent the photo to Paul or someone for ID, but never got round to it...

Tim: PS I don't think the dodder is C. europaea. I went through the descriptions for both fairly carefully after the outing. It's not an easy plant to ID from photos though. Of course, once again I could check with someone from the club. The official lists for the 2014 outings will be coming out soon.

And now I will get on with getting the new lave-linge set up!

Tim: Hmm, not totally convinced by X. italicum now that I've looked at the link, but it's on the right track.

Tim: I think the plant in the photo is likely to be Xanthium albinum.

New washing machine calibrated...
yes calibrated!
And the first was is in...
just waiting for leaks!!

I think your ident is right as X. albinum...
it has got the same red stems, too...
and the illustration here:
http://botany.cz/cs/xanthium-albinum/
... although small, looks right in the leaf.

I noticed from looking up, tho', that they hybridize like crazy if given the chance.

We used to grow Topinambour/Jerusalem artichoke (Helianthus tuberosus) in our yard in Paris and, during the Occupation in WWII, my father dried the leaves of that plant to use as a substitute tobacco and we enjoyed the edible roots.

chm: Sounds like a more sensible approach to the problem.